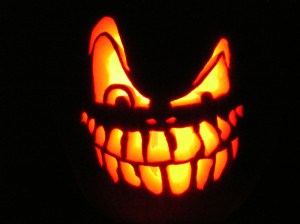 As Halloween approaches we’ve been thinking about the villains that lurk in the shadows of some of our favourite books. A superb villain can define a work of fiction, sometimes even more than a great protagonist (what would the original Star Wars have been like without Darth Vader?). Here are some the scariest killers, sociopaths and monsters from modern fiction. Do you agree with our choices? Disagree? Let us know in the comments who the scariest villains in fiction are for you!

Neil Gaiman’s Neverwhere is not short of terrifying monsters, but Croup and Vandemar somehow manage to worse than all of the others. Calling themselves the Old Firm, Croup and Vandemar at first appear as two odd looking gents who happen to be very good at hurting people. However as the tale goes on it becomes clear that Croup and Vandemar are merely ‘human shaped’ and can pursue their prey anywhere in space and time.

2. Pennywise The Dancing Clown – IT by Stephen King

We blame Stephen King for our fear of clowns. Pennywise is just a projection of an interdimensional child eating entity known as IT. IT could take on any form it chose to heighten the fear of its victims, but for some reason it kept coming back to being The Dancing Clown. We’d rather take on the giant spider thing IT becomes in the end.

Quote – “I am the am the eater of worlds, and of children.”

3. The Other Mother – Coraline by Neil Gaiman

Neil Gaiman’s Coraline is a book that children love, and that adults can’t finish because it’s too scary. The Other Mother is a perfect version of Coraline’s mother. She’s also a life stealing monster that wants to feed on the heroine’s life force in the saccharine alternate reality she’s created for her. There’s something awfully creepy and spiderlike about the Other Mother.

Nicodemus is a man for whom demonic possession became a business partnership. He’s shaken hands with the devil on his shoulder and lives to bring about as much pain and suffering as he can. Nicodemus is one of the rare character’s in fiction who makes being evil a believable character trait instead of lazy writing.

Quote: “Apocalypse is a frame of mind. Nicodemus said then. A belief. A surrender to inevitability. It is a despair for the future. It is the death of hope.”

A man with a devil on both shoulders, Carcer is the kind of person to give you a look of wounded innocence while repeatedly stabbing you in the face. In a world containing everything from Eldritch Abominations to werewolves and vampires Carcer is a very human, very recognisable kind of evil…and that’s what makes him so frightening.

Quote – “You realized that people like Carcer were not mad. They were incredibily sane. They were simply men without a shield. They’d looked at the world and realized that all the rules didn’t have to apply to them, not if they didn’t want them to. They weren’t fooled by all the little stories. They shook hands with the beast.”

Quote: “Your boy Josiah…There’s a place for him in Christmasland.”

Annie Wilks isn’t a bad person, not in her own mind. To her it’s completely reasonable to hold a writer hostage until he resurrects her favourite character. Everything Annie Wilks does is the right thing in her own mind, no matter how horrific it would be to an outsider. Annie Wilks represents something that’s usually positive (being a fan) taken to a dark extreme and because of that she deserves a place amongst the others on this list.

8. James Moriarty – The Sherlock Holmes stories – Arthur Conan Doyle and many, many others.

Moriarty is Sherlock Holmes gone bad. A genius so smart that he makes other geniuses look bad, Moriarty is only ever directly seen in two of the original Holmes stories, but he made such an impact his influence can be felt in just about every Holmes story told since. A consummate planner, respected professor and calculating sociopath Moriarty is frightening because he shows the extent that genius can be abused. No matter who you are, no matter what you do, he can get to you and he can hurt you.

9. Hannibal Lecter – The Silence of The Lambs, Hannibal, Hannibal Rising –

Doctor Lecter is charming, gregarious and intelligent. You get the feeling he’d make a good dinner guest if he wasn’t a sociopathic, cannibalistic serial killer. Lecter makes for a frightening villain because he’s got the traits of a hero turned to a dark purpose. His charm and intelligence are weapons, as is his knowledge of human nature but no matter how charming he is on the outside we’re never allowed to forget the visciousness of the monster hiding under Lecter’s façade.

If he invites you over for dinner, say you’ve got other plans.

Quote: “A census taker tried to quantify me once. I ate his liver with some fava beans and a big Amarone. Go back to school, little Starling.”

Edglar Vess sees the world as existing purely for his enjoyment. This would be so bad if Edglar’s hobbies trended more towards theme parks and fine food rather than torture and killing. Vess states many times in the novel that he wants to live with ‘intensity’ and he’s prepared to do anything to find the extremes that he craves.

Quote: ““The sole purpose of existence is to open oneself to sensation and to satisfy all appetites as they arise.”