The Vampires of the Dresden Files

The Dresden Files Vampires broken down by a real “Vampirologist”

My hands down favorite author is Jim Butcher. I “discovered” him one year at DragonCon. He was on a panel and was so funny and brilliant and entertaining that as soon as the panel ended I went to the dealer’s room and picked up his first book Storm Front. I began reading it that night in the hotel and was instantly hooked.

Professionally, I am a Vampirologist. Often times I joke that in a lot of ways I am like Santa Clause-busy for one month out of the year and then nothing. But more and more often, that is becoming less true. I find that I spend a lot of time answering e-mails from folks who are doing research themselves, appearing on radio talk shows, pod casts, fielding questions from fellow authors, and the like. One of the questions I get asked a lot are about the vampires in the Dresden Verse – what is my opinion on them?

Jim is brilliant. I know he does all his own research, or at least 99.999% of it, and he has quiet brilliantly handled the age old question of vampires and the random abilities they seem to have. He has broken them up into Courts and differentiates them by color, smart and simple and easy for readers to remember. So far we have had the pleasure of meeting vampires of the White, Red, and Black Courts. But there is another court, the Jade court. That’s right, not green, Jade. The very word “jade” must mean that they are from Asia.

White Court vampires are the most human like of all the vampires in the Dresden Verse. They can walk about in the sunlight, eat food if they so desire, and wholly pass for human unless they make use of their supernatural abilities. White Court vampires are basically incubi and succubi. They live off of the life force of others that is garnered through high levels of emotional activity. Some vampires, like Thomas, live off of sexual energy; while other vampires, like Madrigal, live off of fear.

White Court vampires are not the most physically capable or strongest, but they have the fewest weaknesses to exploit. They move fast, are fairly resilient to damage, and can heal quickly. When they use their supernatural abilities they seem to radiate a cold around them and glow with a silver aura. Their blood is pink, not red; they do not usually fight but prefer to make deals and use their accumulated power to assert control.

Their biggest difference from the other vampires however is that White Court Vampires are born, not turned or created after death. They are also the only vampires that can be saved from their vampiric future. If the vampire is able to fall in love before their vampiric nature kicks in, it never will. (If only Thomas had met Justine a little sooner)

Red Court Dresden Files Vampires are fairly human like in appearance because they wear, as described in the books, “flesh masks” over their bodies that make them appear to look like beautiful and sexy people. In fact, they are horrid bat like creatures. 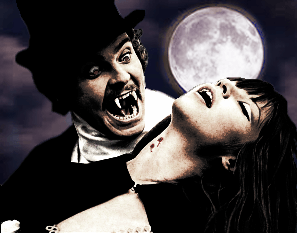 I want to suck your blood!

Their saliva contains an addictive element to it. When they “kiss” a human, the person enters into a state of euphoria and doesn’t mind being fed off of. After continued uses, the human is physically addicted to the “kiss” and will go to great lengths to protect their vampire master.

Red Court vampires are physically powerful, very fast and are hard to hurt in a fight. However, they are easily killed if their belly is cut open causing them to bleed out very quickly. Of course, the trick is, you have to get that close to cut them.

Red Court vampires make more of their own by infecting a human with their vampiric thirst. The human will gain all of the vampires’ abilities but not be fully transformed into the icky bat critter until they kill their first victim. Some infected humans are able to hold out against their thirst with the help of magic and organizations like the Fellowship of Saint Giles.

. They are the smallest and politically weakest of all the vampires because, thanks to Stoker’s book, everything is known about them, making them easy prey for monster hunters.

They are the physically strongest, able to one hand lift and toss a car and run through a solid concrete wall. However, they must also sleep in their native soil, are susceptible to sunlight and garlic, and religious items.

Between the above mentioned vampires, Butcher has managed to cover many of the various powers and abilities that we have come to know vampires to have.

As a vampirologist I can tell you this, there are over 900 different species of historical and mythological vampires that have existed from ancient times to modern day, and as someone who is familiar with them all, I have to say Jim did a damn good job when he sat down and defined the vampires of his world.
There are rules and structures and parameters that they operate in, making wonderful consistencies that other authors lack.

Which brings us back to the Jade Court. So far, Butcher has said nothing of them in his novels except that they exist. What can we expect from them, enquiring minds want to know. Well, although I cannot say for certain when they will be used or in what capacity, I think I can give you a general idea as to what I suspect vampires of the Jade Court will be able to do physically and what their weaknesses will be. How can I do that? Do I have some secret insider information? No, I told you, I am a professional vampirologist. It’s my job to know stuff about vampires. 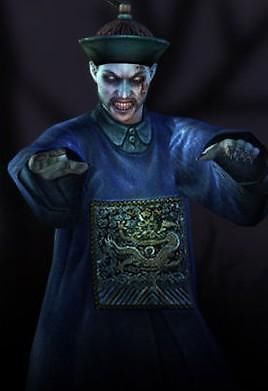 The mythology of the Chinese vampire dates back to 600 BC.

Generally speaking, Asian vampires cover an area from Serbia, across China and over into Japan. Outside of this area, the vampire mythologies begin to fragment and splinter off.

I suspect that vampires of the Jade Court will come into being one of four ways:
1. Being cursed in life to be reborn as a vampire after death
2. Dying away from home and not having the body return for proper burial
3. A demon taking possession of a corpse who died in an act of suicide
4. By one of the following supernatural means – a cat jumping over the corpse, a bird flying over the corpse, or moonlight falling over the corpse.

I know that last bit of “creation” is hard to imagine, especially in our very modern and savvy world, but you have to remember that these are a people steeped in tradition and very respectful of one another. How hard is it really to keep the damn cat from jumping over grandpa’s corpse while we say a few prayers over it? Not very hard at all. To let that happen would be even by today’s standard’s outright tacky and downright rude. For the sake of good storytelling, I have every confidence that whatever means of creation Butcher goes with, even if it is one he creates himself, it’ll be in sync with the rest of his fictional vampires in his fictional world.

What could the vampires of the Jade Court look like? Well, if Butcher decides to stick with the oldest and strictest of the Asian vampire lore, their appearance will change as they age. Generally speaking, as these vampires grow older and more powerful, their physical appearance changes as well. For instance if you see a vampire with long and pure white hair, you know that he is an old monster. Otherwise, the folklore tells us that they have long curved fingernails, red eyes, greenish skin and hair that will turn white with age.

Tradition tells us that Asian vampires are flesh eaters and drinkers of human blood. The vampires of the Jade Court, should they be likewise, could have an array of abilities to use in order to seek out their victims. Again, if Butcher sticks strictly to the old myths, they will have the ability to shape shift in to a glowing ball of light. After it has become fully mature (when its hair is white) it’ll be able to shape change into a wolf and will be able to fly on its own. It will have breath so bad it could kill a man, and will be able to track a person by scent like a bloodhound. 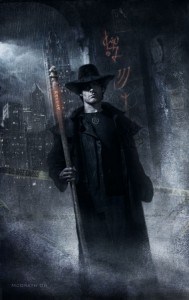 For as powerful as vampires of the Jade Court could be, Harry Dresden will be able to defeat them in the end. Not for nothing, he is the hero and it would be silly to kill off the franchise in the middle of the series. The old myths tell us that a traditional Asian vampires have difficulty crossing running water, are blind, and are terrified of garlic and loud noises. In fact, a loud enough thunderclap can kill one. So can the sound of gunfire. Additionally, Buddhist prayers written down on paper and slapped against their forehead will kill one, as will performing proper funeral rites for it. It seems to me unlikely that Butcher will go with them being so susceptible to loud noises, particularly gunfire. Not for nothing, his debut novel Storm Front would have killed every member of Jade Court in the first 50 pages.

Other species of Asian vampires such as the Hopping Corpses, Con Tinh, Mei, Gaki, and the Ikiryoh are unique types of vampires that do no neatly fit into the general Asian idea of a vampire, each for a variety of reasons.
* The Kaibyou and the Nabeshima are vampiric cats.
* The kappa is a vampiric creature, but its vampiric aspect is really the smallest part of its mythology.
* Tengus are more crow demons and mountain spirits with vampiric aspects.
***I would also like to say that more and more European and American ideals of the vampire are seeping into the Asian tradition, and mainstream media is making this happen at a startling rate.

So, I think it’ll be interesting when the Dresden Files finally unveils the vampires of the Jade Court to us. I have to admit, I am a bit curious as to how close my predictions will be. Naturally, Butcher will pick and choose the traits and aspects for his vampires of the Jade Court that best suite his world and story line. I do not expect that they will perfectly adhere to the original or traditional myths, in fact, there is a lot of room for literary improvement that I hope will be taken advantage of.