The Zombie Horde and Publishing
By Julie Butcher-Fedynich 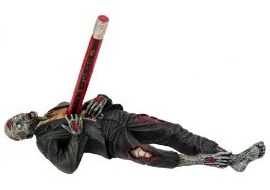 Everyone knows that when the zombie apocalypse comes, the chubby, slow guy gets eaten first. Of course, you’re leaner, faster, and probably exercised more than twice in the last twenty years. So, when the horde stops to munch Rolly Polly, you put on a burst of speed and pull out in front. You aren’t luckier than Rolly Polly, you’re not smarter.

You just did what you had to do. You ran. Certainly, you never wished the zombies would eat poor Rolly. Nor did you collude with them on their menu choice. Therefore, you have no reason to feel guilt or sorrow about your own decision to survive.

Writing with the dream of being published is like running from a zombie horde.

In a zombie chase, once you start, you don’t stop. You write and you write some more. At the start you’re in a pretty huge crowd. Everyone has no idea what’s the right or wrong way to proceed. They just write-which is what you’re supposed to do.

Later you’ll see writers drop out of the run. Some fall to the Monster of Despair, others to the Great Beast of Lazy. Still others are eaten by the Zombie-run Vanity Presses who not only consume their career, but steal their money while swearing false promises of fame and fortune-combining insult with injury. (The money flows TO the writer, never the other way around.)

But you keep going and fighting because if you seek to be published, you have no other choice. Not one person can take your dream away-except you.

Oh, there’s a sixteen-year-old somewhere who catches a ride on a rocket to land safely behind Publishing’s fortress walls. We’ve all seen this happen. I have friends who found a Biplane and soared to the holy grail in a couple of weeks. But mostly, the writer beats the horde by setting a steady, constant pace. It seems to take forever.

Try to remember that you don’t hear about the solid plodding, and the majority of published authors took a hard road. No one talks about hiding at the base of the walls, waiting and waiting, fighting the edge of despair. They shut up, and soldier on.

Of course, while running from the zombie horde, or cringing at the base of Mount Publishing, the smartest player grabs weapons along the way. The writer who wins the race has the most tools in their arsenal-adjective slayers disguised as machine guns, dynamite as their vocabulary grows from mundane to exceptional.

Then, when the zombie-slaying writer ducks behind the first barricade, the one made from orange road block signs and cardboard boxes, they find their voice. There’s a rhythmic song in their writing, one you can almost sing while you read.

A lot of Zombie-runners stumble here. A voice is a palatable thing and taste comes into play. We all have things we either love or hate. Voice is one of those things. Critique partners sometimes spit out the flavor of this voice, some agents might hate the taste. Others gobble it up like there’s no tomorrow.

The stumbling block comes with trying to please everyone. You can’t, and if you do try, you’ll lose the wonderful voice that is what makes you special. (A good rule of thumb: if three people mention the same spot in your writing as a problem, fix it.)

You need to remember that you’re running from the zombies to a goal. Yes, of course you help people along the way. Otherwise you might as well join the enemy. But, you do this in extra time-not when your writing is on the line. Sure, grab a hand when the other writer stumbles. But, don’t try and carry them to safety. They need to make their own way and the Zombies will eat you both.

Pay no attention to the writers out in front. Maybe they’re stronger than you, and maybe they’re sprinting too hard and when the horde approaches, they won’t have the energy left to keep from being the daily blue-plate special. Try and ignore the runners who blow themselves up with pipe bombs full of internet rants, in fact, stay as far from them as possible so the fall-out doesn’t stop you.

The Monsters are out there waiting to snatch you up. Face forward and try to remember that the guns in the fortress of publishing aren’t aimed at you. They’re there to protect and serve those who have finished the run before you. When you get there, you’ll appreciate the high walls and weaponry. Publishing is a goal, not an enemy.

You’ve crossed the barricade that kept you from finding your voice, now, even though the monsters are blocked by (and eating) the please-everyone-writers, the path starts an uphill grade. Running uphill sucks and if you don’t conquer your pacing, you’ll never reach the citadel. There’s a second protective wall ahead manned by Literary Agents-the guards and guardians of the fortress.

I won’t lie. This wall is a tough one to breech. But if you’ve found your voice and mastered your pacing, the climb can be a breeze. Be wary of the purple tentacles of self-doubt and the little green monsters of envy. Don’t throw your emotional pipe bombs into social media. Suck it up and make the climb.

Once behind this wall of guardians, you’ll feel safer. There’s someone to catch you when you stumble. (Of course, no one but you can keep yourself from exploding.) Now isn’t the time to slack. There are still Zombies, and now they have helpers-those who were with you in the race are turned.

There’s still a mountain to climb. But now, you have a partner and a team behind you. Zombies shuffle along. If you’re faster, and keep your goal in sight, you’ll soon be safe behind the fortress walls.

No one can stop you-except you.