Tom Doyle: Well Thank You for having me.

JMW: Our Pleasure. Congratulations on the release of American Craftsman. American Craftsman is a contemporary fantasy with a lot going on – A magical military unit operating in the bowels of the Pentagon, and secret history, and a family of evil sorcerers. What was the genesis of the story, the thing that you had to write about?

Tom Doyle: Well I wanted to write a very American story of magic and fantasy. I was kind of inspired of all things by the preface that Frank Baum wrote to the Wizard of OZ when he said he was doing that with a Fairy Tale Story because he wanted to get away from European elements and write a distinctly American one and thought well we have this background history and we have authors like Hawthorne and Poe that could kind of create a background mythos all its own and distinct and so even as I was writing this very contemporary story, it happens in the present day, we have as the background for all these family a kind of view of history that Poe and Hawthorne were just writing thinly veiled fiction.

JMW: And the need for Seven Gables and The House of Morton for example.

Tom Doyle: Exactly. And that two of the evil-doers from the past were named Roderick and Madeline as in the House of Usher, except now it’s the House of Morton and even the historical stuff that Hawthorne wrote about the Puritans comes into play. He wrote a lot about John Endecott and so one of his descendants is in this story and he also wrote the colony founded by one Thomas Morton who may have been America’s first rascal and his descendant is actually the protagonist of my novel.

Tom Doyle: I always wanted to write novels. It seems to be if your going to be a full-time writer these days, its almost the way you have to go. There are people like Howard Waldrop who are the exception. Uhm, and so I started by going to Clarion and writing short stories to build up the resume because I didn’t want to start on a novel, put it out there, and have all of that go nowhere, so it was part of my education to do shorter work, to get to the point where I was comfortable that I could sell shorter work and then make the leap to novel writing. But I wrote three novel manuscripts before this one finally broke out.

JMW: Are you going to be bringing any of them out anytime soon? Or are they going to be something you are going to work on later?

Tom Doyle: Well, the publisher is interested in the other ones and its really just a question of how this first series does, so we will see.

JMW: Well good luck on that. But yet, you have a rather interesting career arc of your own. You know, we talk about character arcs in fiction, but your career arc is you went from being a Washington lawyer to writing speculative fiction. How did that happen?

Tom Doyle: Well, I knew that I was not going to be a Washington lawyer for my entire life. I got out of law school, uhm, they did send me to Japan for a while, which was a lot of fun, but it just really wasn’t really a fit with my personality over the decades, so I stuck it out, saved up as much money as I could, didn’t adopt a lot of the lifestyle, and at the millennium, I used the year 2000 as kind of my excuse for a life change. I said “okay, I’m done now, I want out, I did a lot of things like a Zen Monastery, and I went to Jerusalem for New Years 2000, I went to Carnival in Rio, and all of those things to kind of deal with any mid-life issues well before mid-life and then after that, celled down, decided well, what am I going to do? And that’s when I decide well I better do something like writing because I really don’t want to be taking orders anymore for a while, like I realized during that year that I had had kind of enough for doing stuff where I wasn’t that, I wanted to be my own boss for a bit and also, with writing, uhm, from, I tried a number of different things but I realized what I had read, as before I became a lawyer, what I enjoyed, what I felt I could write, was Fantasy and Science Fiction, and so that’s what I settled down to.

JMW: Ya, and your not the only writer in your family. Your younger brother, Bill, is also a writer some renounced. Uhm, what role did he play in this odyssey, or did he?

Tom Doyle: Well he has been, very, first as an inspiration that one could go out there and be a writer, uhm, second, he has been an invaluable valve for the kind of pressures that build up on trying to be a writer and developing one craft, because there are things that happen along the career arc of a writer that really only another writer truly understands, and to have someone like that in the family who’s safe to complain to, and not instead to post your complaints on social media, which is a very bad idea. And so to have someone who in confidence can let you blow off steam about this stupid thing, or that stupid thing that happens in the process has been really helpful and in fact he is in the acknowledgments in the American Craftsman for doing that for me, for being the kind of guy that I could complain to over the years.

JMW: And ya, its really important to have a safe place. Your more aware of social media issues than some folks, because they do sometimes wind up on the legal side of things. Scary isn’t it?

Tom Doyle: It is. It is. Well ya, the law background came in handy with that, back in the day we were told, “Don’t write anything, then in an email, that your don’t want to see on the front page of the New York Times and social media is basically an extension of that.

Tom Doyle: Well, I did want to succeed like him, but in a sense that its fortunate that we’re in a non-zero sum sort of relationship. He’s doing books for younger readers, early grade-school readers, primarily, and he does it quite well. He’s got fiction and non-fiction. Uhm, so we’re not in the same market, but we’re doing the same endeavors, so we can root for each other without feeling that at any juncture we’re pushing the other person. We’re not competing directly in any fashion.

JMW: Cool. But you also write non-fiction. I believe on your website, there are a number of things that relate to that millennial journey you took.

Tom Doyle: I did an internship at the center for millennial studies at Boston University, and at that, afterwards, I did a series, they have a whole library of Christian Apocalyptic Fiction, including the Left Behind books, but many others and as part of the internship, I would sit there and read all of those books and I was kind of at the front of doing some of the academic analysis of those works, before anyone else seemed to catch on and so I did some papers. Two of my first sales to Strange Horizons were non-fiction and were based on that research and I’d done some presentations and such on it. I’ve probably gotten a little stale on the topic as far as I haven’t kept up on the latest works of pre-millennist Christian Apocalyptic Fiction, but its still an interest of mine.

JMW: Well I would say though, that it does show up in American Craftsman. I don’t think that it’s a spoiler to say that at least one of the characters has Apocalyptic fantasies.

Tom Doyle: Oh ya, well, I think that it shows up that doing that reading, doing the reading also of Christian Science Fiction and Christian romance helped inform the character of Endicott and he is a character whose in this first book, a little bit hapless, but I think he is a well-rounded character, a believer, and is, you know, kind of engaged in this rivalry, yet kind of like the fugitive where its he’s chasing the character, but he also sort of sympathizes with the character, hes chasing the Morton character, and the Morton character is from this very Pagan, or really non-believer lineage, and so the way they interact, I think is a kind of statement about how I, you know, kind of a metaphor for how I hope those sort of issues work out in the country at large.

JMW: It’s a good hope. And it, it ends well. I don’t think it’s a spoiler to say something like that. Uhm, are you going to continue writing short stories though, even as you work on the novels?

Tom Doyle: Yeah, I hope that in the gap between books, I mean right now, I’m trying to finish book two, The Left Hand Way. And that’s taking my time. But starting when I get the gap, I have these you know, half finished stories still on the computer that I would love to get a few days with and finish those up and send them out again, because, otherwise it gets too long between having your writing out there, I think. And so it would be nice to keep up with the short stories, as well, and maybe some short works set in the world I’ve created, as well.

JMW: And you’ve mentioned, one of the questions we always ask a writer is, “What are you you working on now?” And I guess what you are working on now is Book two, The Left Hand Path? Is that it?

Tom Doyle: And The Left Hand is a euphemism in the first book for the evil side of these families, as you call them, the evil sorcerers, and they are, uhm, so if you know, in first book The American Craftsmen, the second book, to analogize it to other trilogies it’s the Empire Strikes Back, it’s The Left Hand Way, so evil gets its day in the sun, if you will, and then there will be a third book in the series, uhm I believe that will be called The Master Craftsman, but that’s a very tentative title at this point, and then we’ll see from there.

Tom Doyle: Thank you very much for coming and doing this interview. Uhm, oh I really appreciate how Buzzy’s publication of my story Gifts of the Spirit, which also had used some of that uh, reading of Christian Romance and Christian Science Fiction to infuse that story and it has some similar themes that also pop up in American Craftsman, so people should look for that story on BuzzyMag.

JMW: Great! Thank you so much, Tom.

JMW: And Thank You for Buzzy Mag. 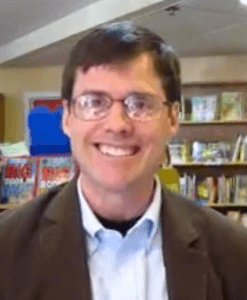