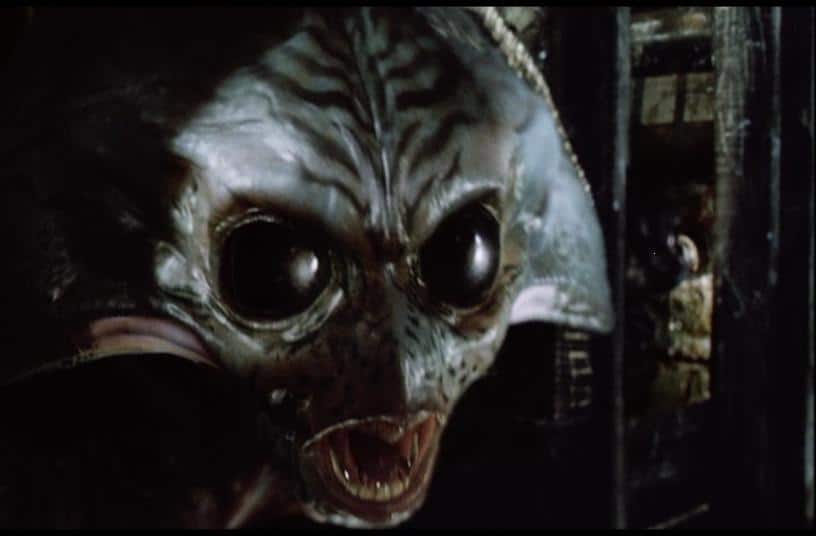 What makes a monster? Sure, while sharp teeth, dagger-like claws, and inhuman speed can all up a monster’s scare-level, the truly frightening monsters have something else, too. Some quality that is just a little off, a little unsettling, that bumps them from your run-of-the-mill antagonist to something that disturbs your dreams and never quite leaves the back of your mind.

All of these monsters fit that bill. Dive into the works they appear in at your own risk—and sweet dreams.

Have a favorite you don’t see here? Let us know in the comments.

Maybe you’re not one of those people that finds clowns creepy, but the monster in King’s IT is sure to change your mind. Feeding on mostly children, taunting and tricking them into its lair, resurging every twenty-seven years, the monster also called “Pennywise” is the stuff of nightmares.

2. The Shark — JAWS by Peter Benchley

*Cue theme music.* Forget Moby Dick: the great white shark in JAWS is bloodthirsty, hungry, and always too close to shore. And in the novel, he is also extremely difficult to kill—and certainly not content with just noshing on a leg before swimming off.

What’s a list of monsters without this iconic vampire? In this novel, Dracula is actually a hospitable(-seeming) Count who travels from his home near Transylvania to England to find some fresh prey, including young women he starts transforming into his own kind.

Contrary to popular belief, Frankenstein doesn’t refer to the monster in this book, but the man who created him. This monster is a tall, hideous creature who, shunned by his looks and grotesqueness, turns to seek revenge against his maker.

Perhaps the most chilling part of the monster Mr. Hyde is that he actually is a part of Dr. Jekyl. Hyde shares Jekyl’s body, in a way, but now with a separate will of his own. While initially called forth via a potion, Mr. Hyde slowly takes over, leaving less and less room for Dr. Jekyl.

6. Cthulhu — “The Call of Cthulhu” by HP Lovecraft

The worshiping humans in this short story’s cult are just as frightening as the monster they are trying to summon: an ancient and deadly creature whose likeness is captured in an idol-like grotesque sculpture. According to the H.P. Lovecraft Wiki, Cthulhu is a “Great Old One” who sleeps beneath the Pacific Ocean, but much about this dark creature remains mysterious and conflicting.

The only thing worse than a blood-drinking spider has to be a giant blood-drinking spider, like the one that appears in Tolkien’s LORD OF THE RINGS trilogy. Frodo and Sam are just strolling along, trying to save Middle Earth, when Gollum directs them to Shelob’s lair so he can dispose of them and recover the ring (naturally). Luckily for everyone in Middle Earth, that didn’t happen—but neither did Shelob die, just retreat…to wait for her next victim.

In this medieval story, Grendel is a piece of work: after attacking and chomping down on a hall full of warriors, Grendel is tracked and fought by the hero Beowulf. Since Grendel’s skin can’t be pierced by normal weapons, Beowulf is forced to deal with the ancient creature another way—and then deal with the wrath of the creature’s none-too-pleased mother.

In ODYSSEY, Scylla is one of two monsters that Odysseus must avoid as he sails through a strait. Sure, the sea monster Charybdis is bad, too, but when Odysseus’ ship comes just a little too close, Scylla snatches up a handful of his crew and eats them alive.

In Wells’ novel, the Martians invade earth and begin attacking humans via the giant machines they use to get around. The unrelenting invasion, inability to surrender, and slow, sure march towards doom make the aliens a terrifying enemy—indeed, it’s nothing that humans themselves do that ultimately defeats the Martians.

Did We Forget To Add Your Favorite Monster?
Let us know in the comments below!


More To Ten Lists On BuzzyMag.com

Article Name
Top 10 Monsters in Horror
Description
What makes a monster? Sure, while sharp teeth, dagger-like claws, and inhuman speed can all up a monster’s scare-level, the truly frightening monsters have something else, too. Some quality that is just a little off, a little unsettling, that bumps them from your run-of-the-mill antagonist to something that disturbs your dreams and never quite leaves the back of your mind.
Author
Stephanie M. Bucklin
BuzzyMag.com