With the web being full of original fiction, we put together a list of the best Science-Fiction and Fantasy Magazines for our Buzzy readers. 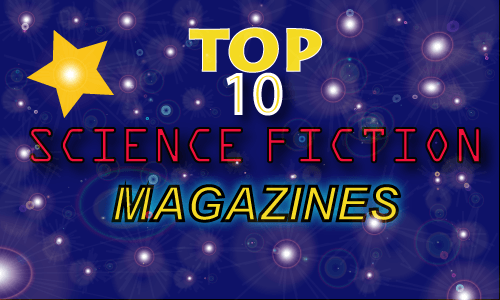 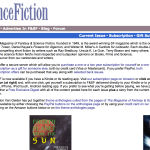 The Magazine of Fantasy & Science Fiction

1. The Magazine of Fantasy & Science Fiction

No Science Fiction magazine site has a more extensive reach than The Magazine of Fantasy & Science Fiction. First published in 1949, among its many contributors are Alfred Bester, Damon Knight, Avram Davidson, Judith Merril, James Blish, Joanna Russ, Algis Budrys, John Clute, Orson Scott Card, Charles de Lint, Elizabeth Hand and Michelle West. Charles Beaumont, Baird Searles, Harlan Ellison . With book reviews by such respected authors as Charles DeLint and Elizabeth Hand and a science column by none other than Gregory Benford, any serious Science Fiction fan should be impressed. Add to that a helping heaping of excellent genre fiction, film reviews, humor and people should understand why this is NOT a free magazine or ezine. They will offer a taste to whet your appetite but you are more likely to get a free meal at L’Atelier de Joël Robuchon in the Four Seasons in New York than get a free subscription. It is worth the price of admission. 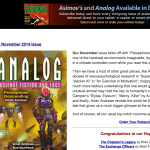 I have been reading Analog as long as I have been reading. Dick and Jane didn’t cut it for me. My father would take me and my brother to a local park, let us play and sit down on a park bench to read his latest issue while still keeping an eye out for us. Not that he was worried about abduction back in the day but he did want to make sure we didn’t poke out an eye or break expensive-to-set bones. I read all his back issues and they were filled with the works of Isaac Asimov, Poul Anderson, Frank Herbert, Robert A. Heinlein, Anne McCaffrey , Spider Robinson, and later Lois McMaster Bujold, Michael F. Flynn. Those were the proverbial tip of the iceberg. The accompanying artwork has been outstanding, also created by masters in the field. Analog has been and continues to be a resource for people interested in the latest developments in science fact and what may be possible in the distant and not so distant future. Analog is NOT a free magazine or ezine. You can’t sustain this kind of publication without somebody chipping in. 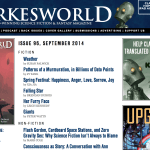 This excellent monthly online magazine or ezine if you prefer, is named for its publisher and author, Neil Clarke. Clarkesworld may be a relative newcomer to the SF magazine scene but it is a veteran by internet standards having been around since 2006. It carries reviews of print and audio books as well as interviews but the main thrust of the magazine is fiction. You can purchase a downloadable subscription for $1.99 a month or an individual issue for $ 2.99. Think about what you pay for a really bad fast food treat the next time you go through a drive-through before thinking twice on spending a few bucks for stories by authors you enjoy. They also offer a podcast subscription with audio fiction. 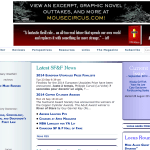 Locus Magazine is the New Yorker and the Atlantic of speculative fiction. Locus Online is the website of the magazine. Both seem to be aimed at a more scholarly audience. The readers tend to be older, sophisticated and highly literate. It covers all aspects of the field and does so in great depth. In addition to reviews and interviews they report on conferences, awards, book deals and publishing news. If you are not just interested in reading or viewing SF but are also interested in reading about the field then Locus is a must. Subscriptions are available for both the hard copy and the electronic editions. 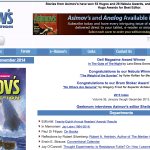 Asimov’s publishes short stories, poetry, novellas and novelettes plus excellent fact-based articles. When you carry the name of one of the most well known Sci-Fi writers you had better deliver the goods. They have been doing exactly that since 1977. Stories from Asimov’s have won 41 Hugos and 24 Nebula Awards. Not too shabby. 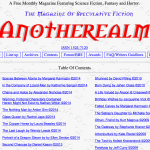 6. Another Realm
Another Realm is a free online magazine of speculative fiction. If you are an author who has yet to make a professional sale this is a wonderful place to put your toe in the water. The magazine pays $25 for the electronic rights to a story and that may not seem like very much but they provide professional editing which can be priceless for a new author. This is a no-frills zine but they have been around since 1995 and in the world of the internet that make them old hands. 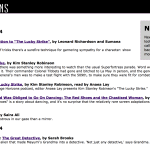 This is a free online magazine funded entirely by donations and they have bi-annual fund drives . They pay professional rates for accepted submissions and have high standards. Their all volunteer staff of 30 does quite a job. 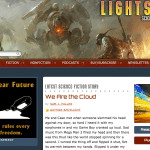 Lightspeed publishes both fiction and nonfiction and in addition to their ezine they are also have podcasts and eBooks. For $500 you can obtain a lifetime subscription. How about that as an incentive to live long and prosper. If you aren’t ready for that level of commitment, you can purchase one issue for $3.99, a year subscription for $35.88 or go the Amazon route and have the 1 year subscription billed for at $2.99 a month. 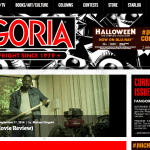 So OK, this is a horror magazine, not Science Fiction and Fantasy. As most fans consider horror to be part of the SF genre albeit a very distinct branch, we simply had to include this top notch, slick zine. It is as their tagline says “First in fright since 1979”. 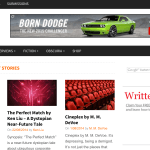 Of course we are going to put ourselves on this list.  We love what we do and know our readers enjoy the content of our website.  You can find original fiction, interviews ranging from authors and actors to show runners, astronauts, and reviews.

Are We Missing Your Favorite Genre Magazine?
Let Us Know In The Comment Section Below!
Get FREE Buzzy Mag Email Updates!