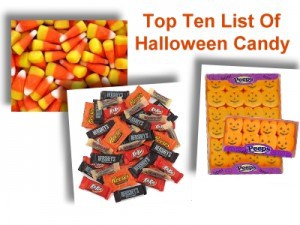 The change of seasons is underway our attention is drawn to the holidays. It all begins with Halloween and isn’t over till we are faced with the possibility of New Year’s resolutions.

I was raised in an era before real fears of strangers poisoning and even abducting kids around Halloween became common, well at least if you didn’t count the stories of being kidnapped by gypsies, a fate I secretly hoped for. Such things were mere cautionary tales that didn’t affect Halloween fun.

The Devil’s Night was unknown and mischief was far gentler. Some of the tricks in the south Bronx were performed by naughty boys who would race through the streets, stairwells and corridors with socks filled with colored chalk, ready to pound any reveler within reach. Rotten eggs were reserved for mortal enemies (yes, not only Sheldon Cooper had a mortal enemy list as a child). Then there were the carefully aimed water balloons launched from fire escapes, windows and roofs. While some youngsters expended their energy in mayhem, my closest bands of friends were intent on gathering candy. Later there would be UNICEF Halloween parties, officially sanctioned neighborhood gatherings and of course adult monitored Trick Or Treating followed by careful examination by Mom and Dad of every goodie for potential hazards.

Preparing for Trick Or Treaters is having the best candy. Candy that makes kids want to come back to your place for seconds and thirds. Here are those that make my list every year.

10) SKITTLES – These rainbow colored treats will not only rot teeth, they can find their way to every nook and cranny. Years later they may still turn up in your vacuum cleaner.

9) SMARTIES- Sour, colorful and they have always come in fun size.

8) CANDY CORN- And all its variants. Crème pumpkins fall into this group. Brach’s Candy Corn Snack Size Packs makes giving out candy corn possible even in this day and age. 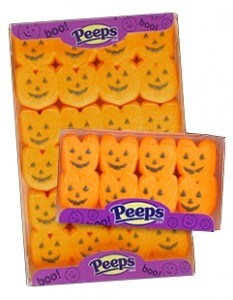 6) PEEPS-They are not just for Easter anymore. Peep pumpkins are cute.

4) EYEBALL CANDY- These now come in mixes so not everyone needs to have the identical eyeballs.

3) PIXY STIX- Another form of colored sugar that is a perennial favorite.

2) GUMMIES- Worms,spiders,mummies are all Halloween-friendly. This is NOT the time for bears and butterflies

1)CHOCOLATE-The most prized of all Halloween treats come in fun size bars and packs. Be they Snickers or M & Ms, Reese’s peanut butter cups or Whoppers, they are sure to please. While any ordinary form of chocolate will go over well, this is not the time to break out the high end stuff so keep the Godiva and Ghiardelli for Valentine’s Day.

Did We Miss Your Favorite Halloween Candy?
Let Us Know Which Is Favorite Treat In The Comment Section Below! 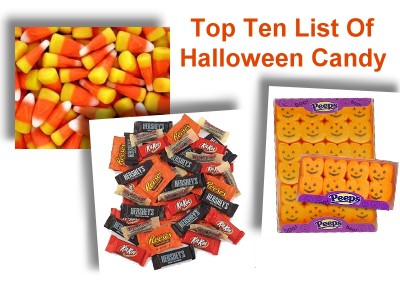 Article Name
Top Ten List Of Halloween Candy
Description
Preparing for Trick Or Treaters is having the best candy. Candy that makes kids want to come back to your place for seconds and thirds. Here are those that make my list every year.
Author
June K. Williams
BuzzyMag.com