The Twilight novels have built up a huge fanbase. Did the movie live up to the hype? The good, the bad and the corny. 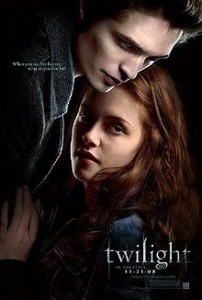 Twilight has a HUGE fandom presence. These new fans are called Twilighters, Fanpires, Twihards and there is even a special category for the middle-aged women – Twi-Moms.

is based. My perceptions are influenced only by what I have seen onscreen.

I was aware going in that this was to be a movie about teenagers and vampires. Having imbibed my share of vampiric fiction as well as been a fan of Forever Knight, Buffy, Ultraviolet and True Blood I am reasonably familiar with the
genre.

How I wish an editor had refined the first third of the movie. The story of the new girl in town finding her way was told in a manner that was dead boring. Kristen Stewart who plays Bella makes you wonder what could ever cause the century old vampire that is Edward Cullen to not only take an interest in her, but be instantaneously smitten by her at first whiff.

Bella first arrives in her biology classroom and a convenient fan blows her hair about like the heroine of an old romance novel perched on the tip of a cliff. The reaction to this by Edward Cullen is the uber obvious move of putting his hand over his mouth, which everyone in the audience is aware means he is hiding his fangs-to-meet-you look.

Bella perceives this as him becoming nauseous at the thought of her sitting next to him. There is nothing in the movie to distinguish her from the other kids at school. No special powers, no calling, nothing at all. I am hoping that the books

let the reader in on the reason, but the movie does no more than hint about halfway through that the telepathic Edward can’t read her mind. That causes her to be compelling to him, that and also his belief her blood would be like “heroin”.

This is romance with a big R – the kind of trappings you might see on a fannish web page filled with hearts and flowers with extra glitter and sparkles. 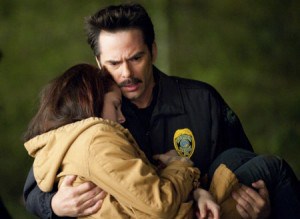 Charlie Swan was born and raised in Forks, Washington. Through his life-long friendships with Billy Black and Harry Clearwater, he is the prime connection to the Native American tribe in Forks.

Now for the things I liked. The use of Native American folklore to explain to both the audience, and Bella, about the Cullen family ties to the area was done well. Having a couple of Native American actors play realistic-seeming people who have every reason to be connected to Bella and her father was another plus.

Bella’s father was not only likeable; he was someone I could relate to. It was easy to understand why Bella chose to live with her dad after seeing what life with her flighty, but loving, mother and her new husband would have been like. 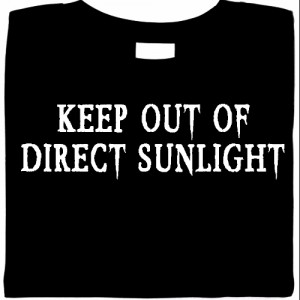 As far as I am concerned the movie didn’t take off till the baseball scene. All American vegetarian vampires playing baseball in a thunderstorm was definitely my favorite part of the movie.

The predictable and sometimes spectacular chase and rescue scenes did not suck in a bad way. ALL the actors that played vampires did so believably. Especially endearing was the entire Cullen family. I would have loved to hear more of the history of Dr. Carlisle Cullen who is father to this clan. I’ve mixed feelings on the soundtrack. It fit the scenes but in some cases was so overblown as to make what was supposed to be a very serious moment into something campy yet at other times it was spot on.

Bottom line is that if you have not read the books what you see is what you get. I’m sure it is more enjoyable if you are a tween or even a teen who was a tween when the first novel was published. The person I saw the movie with said it had the feel of an ABC TV after school special. Having never watched any of those myself I’ll leave it for you to say if they were right or wrong about that. If you are over 18 and on a budget this is not the first film to rush out to see this holiday season. On the other hand it certainly is not the worst film I’ve seen in the past 3 years. I’ll give it a B-. 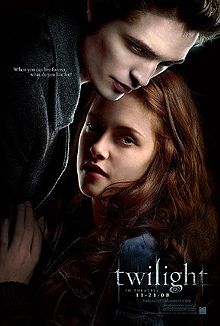 Article Name
Twilight - Movie Review
Description
The Twilight novels have built up a huge fanbase. Did the movie live up to the hype? The good, the bad and the corny.
Author
June Williams
BuzzyMag.com