Riley, an orphan boy living in Victorian London, has achieved his dream of becoming a renowned magician, the Great Savano. He owes much of his success to Chevie, a seventeen-year-old FBI agent who traveled from the future in a time pod and helped him defeat his murderous master, Albert Garrick. 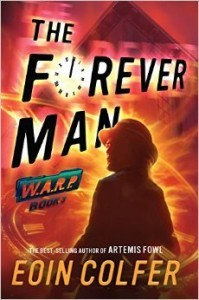 It’s hard to know what to make of W.A.R.P.: The Forever Man. It was a huge amount of fun to read, and capped off a superb series with an ending that was satisfying without being overly twee. As with the other W.A.R.P. books, The Forever Man follows the adventures of modern day FBI recruit Chevie Savano and Victorian era magician’s apprentice Riley as they are thrown together by time travel. They must rely on their friendship and their unique skillsets to fight the weird and wonderful threats that time travel throws into the mix. Chevie and Riley make for a great pair of heroes, balancing their bravery with a good amount of smart thinking.

The reason I don’t know what to make of this book is not because of the plot or the characters, but because it’s hard to know if it is really a children’s book at all.

Penguin recommends it for readers aged nine to fourteen, but there are several scenes in The Forever Man that wouldn’t be out of place in an adult horror novel. Colfer never makes the mistake of lingering too long on the violence inherent in the world he’s created, but unlike the first two books, where the violence had an unreality to it, The Forever Man keeps its violence mostly grounded in reality, and as such has several brutal scenes. There’s also a scene where an anesthetic needs to be applied to a character in a particular way and if you’re phobic about needles you might want to skip that chapter. I doubt that any children will be overly traumatized; kids tend to be pretty keen on blood in books, but Colfer is a good enough writer that the scenes I’m thinking of have a weight to them that a lot of other children’s books just don’t have, so if you’re a parent getting The Forever Man for a child in your life it’s worth bearing in mind. 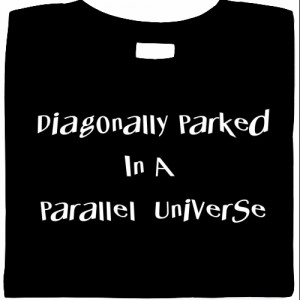 SHOP-Diagonally Parked In A Parallel Universe

With that said, The Forever Man is a fantastic read. The plot takes Chevie and Riley further back into the past than the previous books, where a penchant for disposing of supposed witches is sweeping through the western world. They find themselves in a tiny village beset by odd creatures, dangerous swamps and the looming presence of the Witchfinder General. Colfer has a knack for scene setting and character creation, so it’s only a few pages before the entirety of the village is laid out and the story proper can swing into full effect. The side characters are particularly well drawn, and Colfer builds a town with some complex characters. And a talking dog.

It makes sense in the story.

The science of time travel has always been secondary to character development in the W.A.R.P. books, and The Forever Man is no exception, however a lot of time is spent looking at the time warp itself and how it works. It’s mostly well done, although it does start to border on being a Deus Ex Machina by the end of the story.

This definitely isn’t a standalone book. At the very least, readers would need to have read the first book in the series to have some context for the events in The Forever Man, especially to understand why Riley reacts the way she does to certain situations at the beginning of the book.

Overall The Forever Man is a well written, funny, fun and intense book that is a great conclusion to the W.A.R.P. series. Eoin Colfer has done credit to his own universe, and the three books of the W.A.R.P. series make a great overarching story. Highly recommended; with the one caveat that the violence in the story is brutal at times and might be a lot to take in for some younger readers. 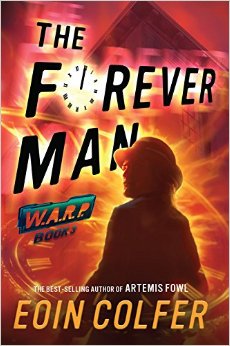 Riley, an orphan boy living in Victorian London, has achieved his dream of becoming a renowned magician, the Great Savano. He owes much of his success to Chevie, a seventeen-year-old FBI agent who traveled from the future in a time pod and helped him defeat his murderous master, Albert Garrick. But it is difficult for Riley to enjoy his new life, for he has always believed that Garrick will someday, somehow, return to seek vengeance.