Ways For Sci-Fi Fans To Make Money In A Tough Economy
by June K. Williams

1. Be Creative.
Places like Etsy, Foodzie and DeviantArt are filled with creative fans who are selling things like vintage pieces of Bajoran jewelry or hand stitched Doctor Who onsies, Star Trek Spock Bottle cap Necklaces, vinyl Star Wars albums, all sorts of Steam Punk accessories, anime portraits and even yummy treats that were served up at Hogwarts School of Witcraft and Wizardry. This serves to not only make you money while celebrating your corner of fandom, but also helps out those of your fellow fans who may not have as much time or talent as they have cash. 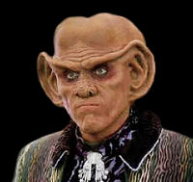 2. Think Like A Ferengi.
Sure, that photo signed by the entire cast of Babylon 5 is awesome but is it more important than this month’s electric bill? With collectibles an auction may be just the thing. You don’t have to be a Jawa to become a successful trader but you do have to know when to release an item before it looses value. Hold on to that autograph of Matthew Fox of the cast of LOST too long and you may not get what you paid for it.

Rick Deckard’s Blade Runner blaster gun sold for $225,000. If you happen to own one of the 500 copies of The Holy Grail of Harry Potter Books, Harry Potter and the Sorcerer’s Stone, published on June 30 1997 in Bloomsbury (first impression, first edition ), you could sell it for over $40,000. Your items don’t have to be that rare to make some money but the fewer of the item ever produced, the better the condition and the more popular the subject, the higher the price. Keep Rule 80 of the Rules of Acquisition in mind. “If it works, sell it. If it works well, sell it for more. If it doesn’t work, quadruple the price and sell it as an antique.” Get ahead of the curve.

3. Clear Out The Clutter.
Ferengi Rule of Acquisition 100, ” Everything that has no owner, needs one.” While collectibles may be hard to part with there is another possible revenue stream sitting on your shelves. CDs, DVDs and Games that you have obtained over time are sold more easily and with greater profit at MusicMagpie.com than at any auction site. It beats yard and garage (boot sales if you are British) sales by leaps and bounds. They even have a nifty feature where you can find out how much that copy of Aliens: Colonial Marines that you were gifted last Christmas will get you just by typing in the bar code numbers into an online form. I love the fact that I can sell my DVD of Caprica and by a DVD of Games of Thrones.

So, OK, if I use the money to buy more stuff it isn’t exactly making money but it is better than going into the hole when my regular income should be spent on lowering my credit card balances.