What Are Fairies?
A Basic Overview of Fairies 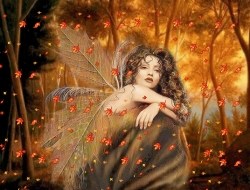 As a mythologist and a researcher I get to write some pretty interesting books and blogs: cryptozoology, demons, folklore, ghosts, mythological creatures, the paranormal in general, U.F.O.s, and vampires to name but a few. Currently, I am working on writing an academic encyclopedia of fairies <fan-girl squeal>.

To begin, “fairies” is the plural form of the species; the singular of the noun is “fay.” There are a great number of folks who use the word “fey” as a noun, but this is incorrect, it is an adjective and basically means “fated to die.” I know people will argue the fay/fey point, claiming this is how new-age folks and those “in the know” do it. Well, be that as it may, I trust the accepted and recognized definition in the Merriam-Webster Dictionary. Look it up in your hard copy or on-line, they are in agreement with one another. Dictionary.com, a popular on-line dictionary I occasionally reference for spelling also agrees with Merriam-Webster on this matter. I hate to be the one to burst your bubble, but the paranormal community loses another strand of credibility every time they get this word wrong.

Fairies are, in my professional opinion, not the easiest beings to define. Unlike demons, ghosts, and vampires, fairies do not have a list of hard line requirements or common traits defining them as a collective. Cultures with fairy lore tend to have a mythology specific to themselves in regards to fairies. In some parts of the world fairies are diminutive nature spirits, in others places they are the returned spirits of lost ancestors, and in some they are a combination of both.

Those people who have a working knowledge of fairies are most familiar with the ones from Celtic lore, but to be fair, even there the diversity of the fairies are widely varied. There are fairies who fly through the air on gossamer wings standing no more than a few inches in height as well as ones who are human-like in size and appearance but are either staggeringly beautiful or blindly repulsive. Sometimes fairies appear as animals, be it a black dog that haunts a road and runs travelers to exhaustion or a green cow giving enough milk to feed a community. They can not only pass for human but also interbreed with them, giving birth to enchanted or blessed children.

Giants also fall into the category of fay; just as there are fairies a few inches tall, there are also those taller than an oak tree. Size is not so much an issue to fairy-kind. More often than not, the personality and temperament of giants tend to range somewhere between “cranky” and “cannibal,” but there are a few examples of giants who are beneficial to mankind or prefer to live in isolation and as far from mortal concerns as possible.

Which brings me to my next point—fairies are neither “good” nor “evil.” Fairies are a force of nature; they are what they are when they are. I’ll explain: Take the element of rain. We only look at rain as being a “bad thing” when we have too much and it causes floods, destroying property, and ruining lives or when there is too little of it, causing crops to die, and paving the way for rashes of flash fires. Even a normal amount of rain is a matter of opinion and timing as far as being “good” or “bad.” If I want my home grown garden tomatoes to get big and red I need a reasonable amount of steady rain throughout the spring and summer. This is annoying to folks who would rather be in the park playing ball or doing any other outdoor activity. This is the best example I know of how to describe the disposition of fairies: they are like nature, ever present, persistent, and unavoidable.

Typically fairies have a dual nature, and a fantastic example of the duality of the fay is shown in the banshee. This is a species of fairy associated with death but not always in a bad way. If a person is walking about the countryside at night and happens upon this particular fay, the banshee will wail out; the combination of its chilling yowl and its frightful appearance is enough to literally scare a man to death. Sometimes this happens right there on the spot, sometimes a few days later, after the victim has the opportunity to tell the tale of how he suddenly fell fatally ill. Conversely, the banshee will adopt a family and keep an eye on it. Whenever one of the family members is about to die, the banshee will let loose with a cry, warning the family that death is near. When the banshee cries out in this fashion it is meant to be as a warning to the family. Or at least, that is how the legend goes. For all we know the banshee who adopted the family really hates them and is very slowly killing off one member of the family at a time, because that would be very much within the nature of the fay.

Fairies are long known for assisting people in daily household tasks; they do this, as far as I can tell, as a sort of compulsion. If the homeowner keeps a neat and tidy home the fairy will finish any chores left undone. However, if the household maid is lazy or steals food the domestic fairy will find ways of annoying the staff into compliance. Boxing ears and pinching servants at night while they are trying to sleep are favorite fairy pranks. Although these tales are popular I find it difficult to believe fairies give a hoot one way or another about on the cleanliness of some landowner’s kitchen. More likely the affluent and powerful did more to foster these ideas than the regular folks who actually worked the land.

Basically, fairies come in all shapes and sizes, in all manner of temperament, and each one seems to be motivated by goals we, as mere humans, cannot even begin to understand. The subject matter of fairies is wide and varied and if there is a specific topic you’d like for me to expound upon in a future post just drop a note in the message block below!