WARNING: If you’ve never watched Game of Thrones or read any of the books, this post contains many spoilers.

is kind of like the Bible of narrative structure. In it, Aristotle lays out “natural” rules for tragedy, for comedy, and for the “tragic hero.” Some of these “rules,” as we have seen, were thrown out the window by George R. R. Martin, which makes his epic story a polarizing one-the very things his fiercest critics accuse him of are the things his fiercest defenders love.

Let’s examine the arc of Eddard Stark. His execution in the penultimate episode of Season One

was perhaps the most shocking moment of the entire series, because it signaled that Martin wasn’t going to play by the rules. Yet, if we look to Aristotle, it’s not that Martin doesn’t build Eddard Stark as a tragic hero in an Aristotelian way, it’s that he kills him off far too early in the story.

Let’s look at the “central features of the Aristotelian archetype,” as described by an article from the Penn State University theatre department: 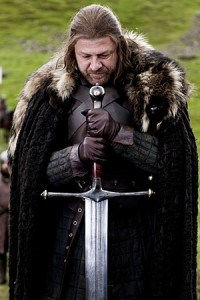 Eddard Stark, as a “tragic hero,” in the Aristotelian sense, almost perfectly mirrors the first four of these descriptions.

He certainly has a noble stature (so much so that it can be seen as his tragic flaw), and he also has greatness- as Lord of Winterfell and later Hand of the King he repeatedly chooses to act in accordance with his own morals. In an early scene, Lord Eddard has his sons watch as he personally executes a deserter from the Night’s Watch. It is the way things are done in the North, the man who sentences another to death should also be the one to carry out the execution. This quickly establishes Eddard as someone who adheres strictly to a moral code and who expects others to follow that code as well.

Yet Eddard Stark is summoned south, where his tragic flaw becomes more and more apparent as he refuses to play the “game” that Cersei, Littlefinger, Varys, and many others in the south engage in-while they use cleverness, scheming, and political leverage to eliminate or subdue their enemies. Eddard is more direct, more transparent, and that is precisely why he is killed. Thus his downfall also meets the third and fourth elements listed above. Eddard Stark’s death most certainly is, at least partially, because of his rigidity, his fault. He, until the very end, does not change his methods to fit his new surroundings and he dies for it. But the punishment far outweighs the crime, especially because he does change by admitting to his crimes with the hopes of staying alive. But it is too late, as Joffrey calls for Stark’s execution anyway a move that surprises even Cersei. Eddard remains admirable throughout first by refusing to change, then by confessing to “crimes” he did not commit in order to stay alive for the sake of his family.

Where Martin seems to diverge from Aristotle, though, is in elements 5 and 6 from above-it is not clear that there is any increase in awareness or a gain in self-knowledge, and there is not a catharsis. For many fans, Stark’s execution did leave them in a state of depression, and confusion. Part of the issue is that Stark’s downfall comes so early in the series and the readers of the books or viewers of the television series know there is far more left to the story as it happens. The hero is now gone far too soon. Even when a hero has his tragic downfall, for Aristotle, it doesn’t come at the beginning of the story, it comes near the end. Yes, Eddard Stark’s execution comes near the end of the first season, but the first season, or the first book, is not the entirety of the story with a story this long, it serves more as a lengthy introduction than anything else.

So why does Martin get away with breaking these rules? Perhaps it is because there are so many “heroic” characters: Daenerys Targaryen, Tyrion Lannister, Jon Snow, Arya Stark, countless others. By killing off the most traditionally heroic of them all first, the one who probably most fits the Aristotelian archetype, Martin lets us know that we’re going to be in for a wild ride. And as we all know now from the Red Wedding and from countless other “shocking turns,” no one is immune.

But by breaking these rules, Martin has established new ones within his own world. The new rules being, of course, that seemingly no one is off limits. In this way, Martin’s story seems more like history than fiction, and as we know, much of his material is drawn from the War of the Roses

. It is the history of a made up world, but it still seems almost documentary in its scope with the never ending cast of characters, with the complicated, intertwining plot lines, with death around every corner.

Perhaps the reason Game of Thrones is such a success is that, collectively, we all as consumers of novels and film were ready for something that wouldn’t play by the rules. When Aristotle wrote Poetics

, people did not have access to drama like we do: No one was sitting on the couch binge watching Netflix or checking out stacks of books from their local public library. They got to see a play or hear a poet recite an epic tale like The Iliad

only if they were lucky.

With the vast majority of the stories we consume following many of Aristotle’s “rules,” we became desensitized to them, and Martin had to come along and throw some cold water into our faces. But now he’s broken the rules so many times we’ve come to expect the unexpected. One hopes that by the end of the series, he finds a way to shake things up again perhaps by giving us a hero who actually wins.

But even if that happens, if some beloved character “wins,” what does winning truly mean in Martin’s world? Is it simply taking power and winning the Iron Throne? Or is it something different, something unexpected? Something more noble?