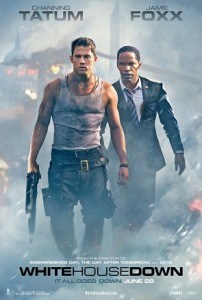 Have you ever seen that Monty Python sketch on déjà vu? You know, that feeling that you’ve seen something before. Déjà vu.

I’ve seen this movie before.

White House Down has its share of plot holes, but overall, there are fewer of them then Olympus has Fallen. They did go super-formulaic with the main character John Cale though, cop, divorced dad, everyone thinks he’s a loser, he’s disappointed his kid, etc. (Gerard Butler wins in the head-to-head matchup).

On the other hand, the president here is a more developed character. I think credit for that goes partly to the script and partly to the performance. In a nutshell, President James Sawyer is a major fan of Abraham Lincoln, who doesn’t want to make history, he just wants to make a difference. To make the world a better place–I’d vote for this guy! And his wife negotiates treaties with foreign governments in her spare time.

The head of his secret service detail (Special Agent Walker) is about to retire, but he’s still got it together when trouble threatens. Special Agent Finnerty, the second-in-command, is a super-capable over-achiever.

Vice President Hammond and Speaker of the House Raphelson both strike an excellent balance between decisiveness and taking advice, while exercising appropriate caution when the situation deteriorates.

Of course, it’s hard to win when the bad guys are perfectly coordinated and their plan goes off without a hitch. Well, nothing stops them from getting what they want, anyway.

In a ridiculous amount of similarity to Olympus has Fallen, sometimes people just plain refuse to listen to intel, and as a result–death and destruction. That struck an off chord in the first movie and it does in this one, too. Good luck follows the bad guys at all times, and yet, someone has lied to them. About something important.

This movie features the best white house tour since 1997’s Absolute Power (“We’re walking.”), courtesy of Donnie the Guide, whose keen knowledge of the antiques in the White House makes him a target. He’s also a perfect foil for Emily Cale, eleven-years-old and obsessed with politics and government.

Aside from the lead role, where Channing Tatum is once again playing Duke from the G.I. Joe movies, performances are nuanced and really first rate. Starting with Jamie Foxx’s excellent turn as President Sawyer and James Woods as Walker, Maggie Gyllenhaal, Jason Clarke, and Nicolas Wright all keep the pace moving. Joey King is stunning as Cale’s exceptional daughter, Emily.

It’s entertaining, maybe a hair so more than Olympus has Fallen, but don’t expect Shakespeare. Or even Anonymous . . . . 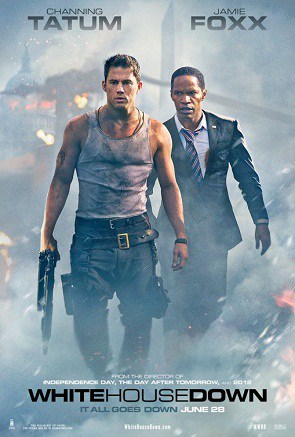 Article Name
White House Down Movie Review
Description
White House Down has its share of plot holes, but overall, there are fewer of them then Olympus has Fallen. They did go super-formulaic with the main character John Cale though, cop, divorced dad, everyone thinks he’s a loser, he’s disappointed his kid, etc. (Gerard Butler wins in the head-to-head matchup).
Author
Elektra Hammond
BuzzyMag.com