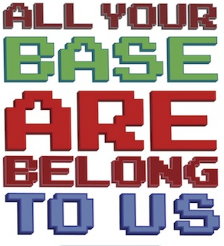 I am a gamer and have been rolling dice consistently since 1980. Active in the gaming community, married to a game designer, and using a very clever pen name, I also write role-playing game source material (No, I am not telling you what my pen-name is, that’s the whole point of having a pen-name). Nearly all of my friends, about 87%, are gamers as well.

And by “friends” I mean those folks I see and interact with socially on a routine basis, spend the holidays with, would allow to house-sit/pet-sit for me, would lend money to, know their birthdays, the names of their spouse and children, and their phone number (as opposed to speed dial 4). My “real friends,” bless their hearts, have moved bodies for me and seen me in my pajamas with unbrushed hair and teeth.

I can’t speak to what friendship is like for the rest of the world, or for “people who live in reality” if you prefer, but I can tell you why I feel my friends are the best sort of friend a person can have.

1. Gamers Don’t Judge. To begin, normally my OCDs would insist this entry be listed as number two, where it would fall according to the rules laid out in The Chicago Style Manual, but all the voices in my head had a meeting and in a rare unanimous decision agreed this is a key and essential point, likely the foundation of gamer friendships. For whatever reason, the gaming community tends to attract the widest array of personalities, life-stylers, orientations, and the like. However, because of our profound love of gaming, we completely overlook everything a person brings to the table except for dice and chips. Religion and politics have no place at a gaming table unless your Knight is going to be facing down a Cleric of Toth.

2. Gamers Are Low Maintenance. The folks I gamed with twenty-five years ago I am still friends with today. It’s nearly impossible for my old group to get together and game as we have all moved to different places across the country but we manage to keep in touch via Facebook, Twitter, e-mails and get word of each other’s highlights to one another. I imagine the folks I game with now I’ll still be friends with twenty-five years in the future.Also, because of our general acceptance policies “newbies” are generally welcome without a lot of muss or fuss. The “new guy” at the table can trust in the support of his fellow gamers throughout game-play because he was invited to sit down at the table to begin with. Unless we were looking to preserve the party’s unity but needed someone to “sacrifice” for the sake of game-play for some reason or another. And I do not mean “sacrifice” in the literal sense of the word; this is not 1985, embrace the fact Satan has nothing to do with gaming and let it go already.

3. Gamers Are Smart. IQ aside, gamers are a damn clever lot. We have to be; our recreational hobby is simply nothing more than complex-situational-hypothetical-problem-solving with results largely dependent on the chaotic results of the unpredictable nature and randomness of dice rolls. In other words, we think out of the box for fun just to see what could happen. Even simpler, we play “let’s pretend” or “what if.” But you got to admit, “complex-situational-hypothetical-problem-solving” sounds cool as beans and is in fact what military war games are all about. Makes me wonder what SEAL Team Six is doing in their free time; are they playing Halo 3 or Pathfinder? Likely both.

4. Gamers Were Green Before Green Was Cool. All things being equal, gamers leave a very small carbon footprint on the planet. We were into the whole recycling thing years before it was the law and years before it was the hip and cool thing to do. Maybe this is because we’re problem solvers and saw the need for recycling coming way out there on the horizon. Or, maybe we also drink a lot of soda and with gaming books being as expensive as they are, we figured out a way to have one resource fuel another. Be that as it may, the point is gamers are environmentally kind. Once we sit down to game, be it in front of our computer screen or at a table, we stay put for hours on end. This means we are not driving our cars, wasting gas, polluting up the air with carbon monoxide, or otherwise wasting resources. The electricity we use to game indoors can originate from a clean source, such as windmills, and is energy that can be recaptured and reused. We are actually creating energy and jobs by staying home and acting like we are doing nothing productive. You’re welcome, America.

5. “Gamers Drink It, What Happens?” Although addicts and substance abusers exist in every cross-section of any subculture, from where I sit, I see very little substance abuse in the gamer community. Maybe it has to do with my age group, but I suspect otherwise as gamers do not hold things like “age” against one another. To be drunk, stoned, or otherwise “out of touch” would not enhance the minds’ problem solving ability; only dampen it. The only things gamers imbibe with reckless abandon are unlabeled bottles their characters pick up in classic dungeon crawls. Don’t misunderstand, we love, love, love to leave reality behind; we just prefer to plug into a video game, LARP, or dice it up at a table. Besides, do you know how much narcotics cost these days? We need this money to buy our new board game, core rulebook, video game console, or D—all of the above.

6. Gamers Are Early Adopters. We are the consumer base the major companies look to in order to discover what to tell the rest of you the next big thing will be. The term “lighthouse customer” or even “trendsetter” would apply but the former would cause the mundane to arch an eyebrow a la Mr. Spock and the latter sounds so blasé. I’ll give you an example: In the gaming world we commonly used e-books way back in the year 2000; we didn’t call them “e-books” but rather PDF documents we purchased directly from the publisher and downloaded onto our computers—it was up to us to decide if it was worth burning to a cd and taking over to Office Max or Staples to be printed out in a cost effective manner.

By the time everyone else became aware of this “upward trending new technology” we were consistently using it. When the Nook and Kindle came along, all these devices did for us gamers was give us the word “e-book” because we didn’t need their little gadget, we were already playing around with this new-fangled lap-top-phone combination thingy.

Remember the Christmas season when the new Kindle was listed at a special introductory price of $150? I personally already owned over a thousand e-books at that point. Here’s a heads up – folks are already testing 3-D contact lenses which let you see advertising and post, just like the side board advertising on Facebook and Google. Frightening when you consider how many people texting kills each year, but otherwise, 3-D contact lenses are pretty neat technology.

7. Gamers Are Not Afraid to Break the Rules. Most people feel a compulsion or other such need to have a list stop at five or nicely round out at ten, but not us gamers. We are perfectly willing to accept the new and different and on many occasions, find it to our liking. For this reason, gamers tend to be a highly tolerant lot when it comes to the open-air discussions of different views and opinions. I love my gamer friends but we do not see eye to eye on every topic and this makes for wonderful, long, heated debates. We can reasonably argue a point with one another without name calling or playing dirty—but even when we do, it is all done for the enjoyment of the discussion; after the conversation has ended or changed gears, there are no grudges held. If only other people could do the same.

Enjoy your gamer friends for whom and what they are, and let our freak-flags fly!