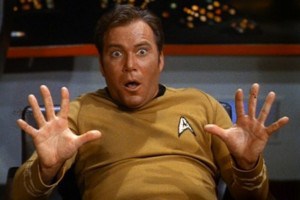 Why is Captain Kirk’s middle name Tiberius? Isn’t that a little exotic for a farm boy from Iowa?

First of all Tiberius was Jim Kirk’s Grandfather’s name but that begs the question as to why his Grandfather was named Tiberius. There is nothing in canon that covers it but there have been stories written that say many Kirk first born males were given the name of Roman Emperors with the hope that they would achieve greatness. So the idea is that despite the down home nature of the family farm business there was a streak of ambition that lasted for many generations.

Take in some random knowledge on Captain Kirk:

James T. Kirk has had relations with every alien species – even those without females.

In Star Trek II: The Wrath of Kahn, Captain Kirk’s illegitimate son, David Marcus was introduced into his life.

Kirk was one of the survivors aboard the Farragut when it was attacked.

Kirk became the youngest starship captain when he received command of the USS Enterprise for a 5-year mission.

Captain Kirk’s dramatic pauses in speech have been called “The Shatnerian.”