Why We Need James Marsters

I can be silent about it no longer. Someone needs to address the 500 pound gorilla in the room and I am no longer willing to just sit here and pretend like it does not exist. I will be the one who bravely steps forward into the light and proclaims aloud “The time has come for Spike to return.” 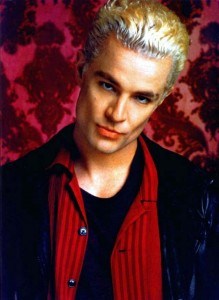 We need Spike. There, I said it. I put it out there. TV has not been the same since he left the airwaves. Let me tell the tale of how he came to be, how he came to leave, and how he needs to come again.

In the beginning, there was Buffy the Vampire Slayer, and it was good. But then the Whedon said Bring me James Marsters to play a one shot villain. And they did and James was good. In fact, James was very good. So great was he that the Whedon then exclaimed:

“Nay, let it be known that the character played by James Marsters known as Spike will not be killed off as the script proclaims, but rather live on as a repeat antagonist. So sayeth the Whedon, so shall it be done.”

And so it came to pass just as the Whedon foretold. Spike was allowed to live at the end of the episode “Halloween

Time passed, and the fans began to like to the villainous Spike, his toothy grin, his devilish smile and the spark of mischief that lived in his eyes. They liked his banter and his razor sharp wit. And the fans cried out to the Whedon and said unto him:

“This character Spike, we like him so. But if he continues on his path of evil he will eventually need to be slain by the vampire slayer. This we do not seek. Rather can he not somehow become good?”

And the Whedon heard the cries of his fan base and thought on it. Then, in the brilliance that is Joss he did indeed not let the cries of the fans fall on deaf ears, but rather harkened unto them.

, before he played Brainiac on Smallville

and was still living in an apartment in LA while performing with his band “Ghost of the Robot” on weekends, James was inclined to accept a large role into the much acclaimed TV series.

And so it was that the writers of the Whedon had Spike captured by a government agency where they had a microchip installed in his head which rendered him impotent to injure humans without pain. The fans watched this plotline unfold on the series and decided it was good. 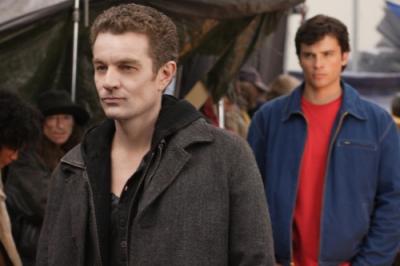 And there were episodes a plenty in which Spike was snarky and likeable, more so than some of the long time and established characters. And the fans began to become uneasy and call out again unto the Whedon.

“Hear us oh Whedon,” they cried, “we like what you have done but now we ask more of you. We want very much to see a relationship develop between Buffy and Spike. Our Buffy fan-fiction is not as good as you can write. We need you to show us the way.”

And the Whedon listened to the cries of this fanbase, for they are the ones who really purchased his house and car and other expensive stuff when you get right down to it. The Whedon turned to his team of writers and said unto them

“Gather close and hear my words. The fans, they cry out to me day and night and I cannot ignore them, for I desire a boat, sleek and fast. We must deliver unto the people what they ask.”

And so it came to be. Spike and Buffy came to know each other in the biblical way and the fans rejoiced, for it was good. I mean really good. So good that to this day the Buffy Spike kiss is mentioned on the top 10 lists of hottest television sex scenes ever.

And the people were pleased, and there was much rejoicing.

And this was all done in the days before James Marsters signed on to play Lord Piccolo for the Dragonball movie.

These were known henceforth as the Golden Age of Marsters. And it was in this most abundant time that he did do the narration for The Dresden Files series of Audiobooks. James as the narrator, the voice of Harry Dresden, a wizard for hire who worked in the city of Chicago. Jim Butcher, author of the books was himself quoted as having said he did the happy Snoopy dance when he heard the news.

A dark cloud began to form and move over the land threatening to destroy the joy of millions. Evil network moguls at UPN delivered their words unto 20th Century Fox, Mutant Enemy, and the Whedon. They declared Buffy the Vampire Slayer would be on television no longer except in reruns and syndication. There was much wailing and gnashing of teeth from the fans.

“No,” they cried out to the Wheaton, “you cannot do this to us. We have come to love these characters and what will become of Spike? Can he not move to LA and join the cast of your other show, Angel?”

The Whedon was angered by the unscheduled cancellation of his TV show that he had nurtured and did as the people asked. It was through the intervention of the Whedon that James Marsters was offered an opportunity to move his character to LA to join the cast of the TV show Angel.

And as this was in the days before small part move roles in “PS, I Love You” and James was still inclined to working and making money, he accepted the opportunity and life was again good. There was much rejoicing from the fans. 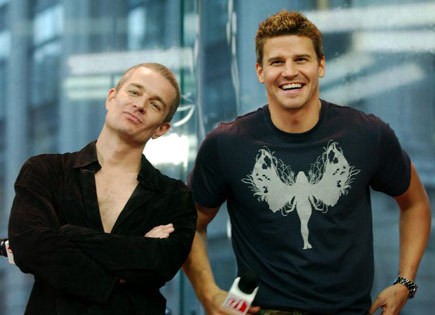 And so it came to pass that Spike came to the City of Angels and did join the staff of Wolfram and Hart, and there too he did steal the show for he was well loved by the Whedon and was given the best lines and story hooks. The fan base watched ever-increasing number ever week to see what sort madness he was going to cause. Plotlines were never so good.

But then the great evil that is the-powers-that-be again raised it’s ugly head once more and did what Buffy the Vampire Slayer could not do – bring about the ends of days for the vampire we loved to hate and loved to love.

But the fans did so love their there Blondie Bear that they cried out unto the Whedon Help us, “for we are about to be lost, what can we do?”

And the Whedon was sad at the loss of his shows and knew not how to save it. And for the first time ever the Whedon was not able to answer to cries of his people.

Spike was lost to the fans. The Whedon wrote of him no more.
…And so came in the darkness.

So why do we need Spike? Its simple really – he was the only character on TV that was ever honest. He told the truth, especially when it hurt, but it was always relevant and pertinent, and I have to admit, he was never sexier than when he was delivering the hard core and honest truth. I guess it was because there was this evil little imp that lived in his smile or eyes. And this being an election year, we need some honesty. But more than that, we need Spike because, fan fiction, it’s just not cutting it.