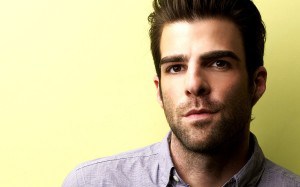 Zachary Quinto is currently nominated for a Primetime Emmy for Outstanding Supporting Actor in a Miniseries or a Movie for his performance as the deceptively kindly, secretly depraved Dr. Oliver Thredson, aka Bloodyface, in AMERICAN HORROR STORY: ASYLUM.

At the time of this interview, Quinto is attending a party thrown at the Soho House in West Hollywood – a top-story venue with a stunning view of the city below – for the Television Critics Association by Fox and FX. Since most of the actors, producers and scriptwriters are here to discuss their new shows, apparently everyone (including this reporter) has approached Quinto under the assumption that he’s going to be in the new edition, AMERICAN HORROR STORY: COVEN, which premieres October 9 on FX.

For those unfamiliar with AMERICAN HORROR STORY, each season of the series created by Ryan Murphy and Brad Falchuk is its own self-contained miniseries, with a beginning, middle and conclusive ending. In Season One, Quinto played the ghost of a man trapped in a haunted house with the spirit of his inattentive lover. Jessica Lange won an Emmy for her turn as a ferociously determined woman with ties to the house. In Season Two, Quinto’s character Thredson is a psychiatrist who moonlights as a homicidal maniac. Lange has received an Outstanding Actress Emmy nomination for playing (this time) an autocratic nun who goes on an unexpected personal journey, and two of Quinto’s fellow supporting performers, Sarah Paulson (also a Season One alum) as a reporter who is victimized by Thredson and James Cromwell as a psychiatrist with dreadful secrets of his own, are likewise nominated.

Quinto says he’d love to be reunited with Lange and Paulson, who play mother/daughter witches in COVEN – “From your lips to God’s ears” – but time may not permit. “We’ll see what happens. I’m getting ready to start a play – I’m doing a play on Broadway right now, THE GLASS MENAGERIE.” Previews of the revival of Tennessee Williams’ famed drama begin September 5 at the Booth Theatre, with the official opening scheduled for September 26, running through January 5. Quinto will essay Tom, whose mother, the formidable Amanda Wingfield, will be played by Cherry Jones.

This will be Quinto’s Broadway debut, but he’s had plenty of stage experience dating back to high school in his native Pittsburgh – he won Central Catholic High’s Gene Kelly Award for his performance as the Major General in Gilbert and Sullivan’s THE PIRATES OF PENZANCE. He has since done a lot more stage work, including playing the central role of Louis in ANGELS IN AMERICA.

However, most people know Quinto from his film and television work. Although he had prominent roles in the third season of 24 and in So notorious, Quinto really grabbed public attention as the super-powered killer Sylar on four seasons of HEROES. On the big screen, he’s known for playing Mr. Spock in the J.J. Abrams-directed STAR TREK and STAR TREK: INTO DARKNESS, as well as costarring in the acclaimed Wall Street thriller MARGIN CALL.

Sylar was such an indelible character that it seems natural to ask Quinto whether, in AMERICAN HORROR STORY: ASYLUM, he had concerns about playing a psychotic killer …

One of the things Quinto was called upon to do while playing Thredson was a scene where his character forces himself sexually on Paulson’s character. Was that uncomfortable to act?

“Of course,” Quinto replies. “But it was mitigated by the fact that I am incredibly good friends with Sarah Paulson and I have such an affinity and respect for her, and to have to do something so graphic, it’s really tempered by the idea of doing it with someone that you know well and trust and that was very important to me. So our relationship as friends helped to take the edge of that a little bit off.”

Quinto began his film producing career with a series of shorts, then moved into features with 2011’s MARGIN CALL, which was produced by Before the Door, the production company that Quinto is in with Sean Akers, Neal Dodson, Kate McCaslin and Corey Moosa. Written and directed by J.C. Chandor, the cast of MARGIN CALL included (besides Quinto) Kevin Spacey, Paul Bettany, Jeremy Irons, Mary McDonnell, Simon Baker, Demi Moore and Stanley Tucci.

This year, Before the Door brought forth the summer comedy BREAKUP AT A WEDDING and has two upcoming releases. ALL IS LOST, directed and written by MARGIN CALL’s Chandor and due out October 18, stars Robert Redford as a lone sailor trying to survive a storm at sea. THE BANSHEE CHAPTER is scheduled for release November 8. Since BANSHEE’s star Katia Winter has just been chatting with Quinto – she’s here on behalf of her new supernatural series SLEEPY HOLLOW, which debuts September 16 on Fox – it seems natural to ask Quinto about the film.

“Katia [is] with the Headless Horseman,” Quinto quips. “So it’s all in a circle, right? THE BANSHEE CHAPTER is a psychological thriller/horror movie. Katia plays a journalist who is investigating the disappearance of a very good friend of her character’s, who has immersed himself in some experimental drugs, I would say, and it opens up some portals and some other dimensions, and it’s really scary and exciting. I’m really thrilled about it.”

How did Quinto and Before the Door decide on THE BANSHEE CHAPTER as a project? “We chose it because the director [Blair Erickson] is a guy that we knew from Carnegie Mellon, where I went to school,” Quinto relates, “and we liked what he had to say about [the subject matter]. We liked the script and we liked the way he wanted to shoot it. He used a whole new 3D technology with cameras that he is sort of pioneering the use of, so it was an element of innovation in the storytelling that we liked, and we really liked the story.”

Is there anything else Quinto would like people to know about him right now? “I’m just thrilled to be getting ready to do this play [THE GLASS MENAGERIE] on Broadway and I hope you and everybody who reads what you write will come see it.”