A Fan’s Guide to Convention Costuming
Preparing a look for your next Sci-Fi, Anime,
Furry or Horror Convention. 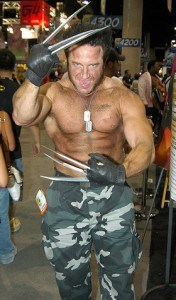 If you are thinking of taking the plunge and showing up at your next Anime, Horror or Sci-Fi convention in costume but are not sure where to begin then I may be able to help you. I’ve been on the convention circuit with and the very big ones like DragonCon and ComicCon, costuming presents an opportunity to let ones imagination run wild in a physical sense. The lure is almost overwhelming yet many of us resist because of fear of not being able to pull it off in such a public arena.
We’ve all seen them at conventions. For example, the dirty Klingon whose forehead appliance is affixed with Elmer’s glue wearing a uniform that has more tears than a trendy pair of jeans.
The fan wearing an ill fitting Sailor Moon outfit with a wig that doesn’t quite cover their natural hair. Then there is the more than amply endowed older woman who doesn’t know the first thing about selecting and wearing a bustiere so instead of enhancing her assets she turns them into a moving violation. (Spandex should have an age and weight legal limit, and this is coming from a BBW herself) Or perhaps the color blind con-goer wearing a 30 year old t-shirt adorned with a giant graphic design made to look even worse by being tucked into dress pants or shorts with a belt tied beneath the large belly or {shudder}…showing a wide expanse of hairy abdominal flesh. We have not only seen theses or similar disasters, sometimes we or some of our closest friends, family and colleagues have been guilty of these or similar outrages. 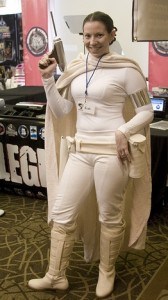 If only some kind soul would have told us we could have saved ourselves a shred of dignity and maybe even become a success at costuming. While I am sharing some information and insights on the subject please remember that these are not rules, at most they are guidelines. You don’t need a list of do’s and don’ts. If you are grown-up enough to find this blog then you should be able to filter out what tips are best for you. Before we begin I want to let you know that it isn’t necessary to spend barrels of money or 10 months preparation to have a nifty costume. Nor do you have to be a genius or have the best looking body on the planet. You too can have a blast AND look cool.

1. Take a good look in the mirror. For some of us this is painful as we either remember how we used to look before Father Time took a sledgehammer to us or we have never been happy with our appearance. Fear not. There are many people who look worse than you as well as better and you probably aren’t looking that bad. You will be hearing from your harshest critic…YOU. Now that you are looking, what are your best features? The ones that don’t make you cringe. Come on now there is something you have received a compliment on at some time or other. That winning smile, those tapered fingers, the color of your eyes? Write these down because when pulling together a look you’ll want to accent and bring those features forward. 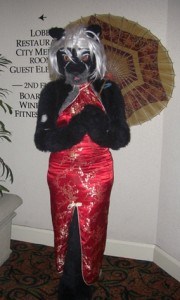 2. Take stock of what are your reasons for costuming. Is it to look cool or cosplay (for the uninitiated that means to dress up as a character for fun)? Are you hoping to attract the opposite sex or the same sex if that is how you are inclined? Do you want to costume so you can be identified as part of a particular group? You really don’t have to have reason to wear a costume but if you have something special in mind it would be wise to factor that in to your selection.

3. Decide on a budget. Some people seem to have limitless resources for this sort of thing but it isn’t necessary to achieve your goals. My nephew pulled off one of the coolest costumes that I have ever seen at a convention for very little money and even less inconvenience. He came as Norman. Norman was the head android, the controller of all the androids on Mudd’s World, an episode on the original Star Trek series. All the androids wore necklaces with their number designation etched into a white medallion. My nephew Alex knew that all he needed to pull it off was to wear a grey turtleneck and pants with a medallion bearing Norman’s designation. So he was comfortable, kewel and somewhat enigmatic knowing that only those who have seen the episode many times might recognize the character. Now I’m not saying you should comb your videos to find an obscure character to play but it does show you that you can have fun without spending bushels of money and breaking your back working all year long on creating a costume. You can do both of those things but you don’t have to do them in order to get into the swing of things. Once you have decided on that budget you will need to get your creative juices flowing to match your desired vision of yourself.

4. Assess your skills. If you can’t sew a hem or a button don’t consider elaborate costumes that require a lot of tailoring.
Are you are handy with a glue gun or excel at putting together projects out of Legos or perhaps skilled at electronics? You can find as much use for your aptitudes as a seamstress or tailor. Not gifted with anything involving the use of your hands? Then you have even greater need of using your imagination. I know of someone who had neither time, money nor manual dexterity who was faced with coming up with a costume for the Fourth of July. They simply wrapped themselves in the flag and appeared as the Spirit of 1776. No, that wasn’t for a Sci-Fi convention but the principle still applies. 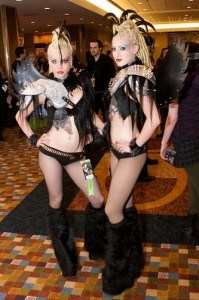 5. Work with friends. If you are going to a convention with friends see if you can get a group theme going. That way all members of the group can contribute their particular skill set and you can have as much fun creating the costumes as wearing them. In 1997 Men in Black was the blockbuster hit of the year. I am unsure if it was at Shore Leave or Dragon Con but a group of women entered the costume contest as MIB – Mothers in Black. They did a dance number to the MIB theme music with a clever voice overlay for their Mothers in Black theme. Even an armed to the teeth Borg complete with lasers and led lights in all the right places couldn’t outmatch those ladies. Personally when it comes to this kind of thing I’m pretty lazy so having a group to work with will make me more likely to see it to completion.

6. Return to the mirror and make sure you have another mirror that allows you to see your derriere. Does what you are wearing cover or accentuate those parts that you either want to feature or hide? Check how you look going as well as coming. If you are wearing a Fursuit be sure your tail (if you have one) is affixed properly and that you wear a generous amount of deodorant and underclothes that wick away moisture (ok that has less to do with how you look then how you smell but important nonetheless).
Have you rid yourself of distractions like white 21st century running shoes underneath a 17th century pirate’s outfit? I also prefer comfortable shoes and there are some you can find to go with garb but only Doctor Who and Hugh Jackman can get aware with sneakers and a dress suit. Do you wear glasses? How about getting a frame that matches the time period? Ben Franklin or granny glasses or even a monocle cover a wide range of time periods from the 15th through 20th centuries. Wearing a Chobits Freya outfit? Try not to keep a Bluetooth in your ear. In general it is a good idea to try to keep yourself from obvious mixing of time zones in you garb unless there is a safety issue that makes it necessary.

Last but not least. Have fun. That is what this is all about. The minute it stops being fun and takes on the dead earnest feel of corporate or evolutionary struggle, head for the exit doors. 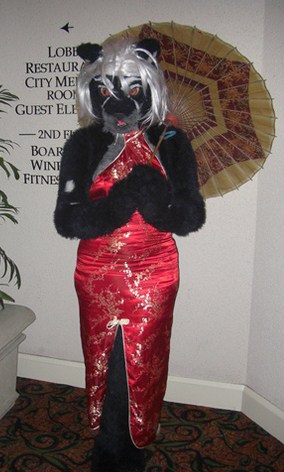 Article Name
A Fan’s Guide to Convention Costuming Preparing a look for your next Sci-Fi, Anime, Furry or Horror Convention.
Description
If you are thinking of taking the plunge and showing up at your next Anime, Horror or Sci-Fi convention in costume but are not sure where to begin then I may be able to help you. I’ve been on the convention circuit with and the very big ones like DragonCon and ComicCon,
Author
June K. Williams
BuzzyMag.com