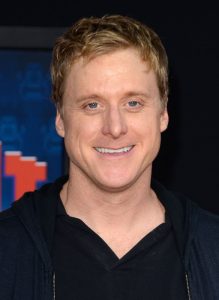 Alan Tudyk has achieved true genre stardom. Arguably, that first occurred over a decade ago, when the Texas-born actor costarred in the TV series FIREFLY

and its cinematic spinoff SERENITY

. Tudyk also had a few other cult hit films to his credit, including A KNIGHT’S TALE

(as Steve the Pirate, who said “Arrrr!” a lot before it was a thing).

, a series regular gig on SUBURGATORY

, a villainous voice in FROZEN

2016 was spectacular, though, even compared to what had come before. Tudyk had previously played an artificial intelligence being in 2004’s I, ROBOT

. Technology came a long way when he repeated the feat as the repurposed Imperial droid K-2S0 in ROGUE ONE : A STAR WARS STORY

. Tudyk did voices for two separate animated Disney hits, ZOOTOPIA and MOANA. He also completed the second season of the Web series he co-created, stars in, directs and produces, CON MAN, which follows the fan convention appearances of Tudyk’s character Wray Nerely, who once was on a show called SPECTRUM that bears some similarities to Tudyk’s gig on that other much-loved one-season outer space series (including a leading man played by Nathan Fillion). 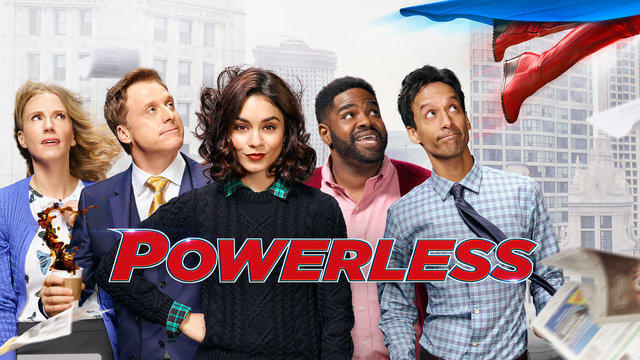 Emily Locke is an insurance adjuster specializing in regular-people coverage for against damage caused by superheros. Standing up to one on the train makes her a “hero” to her band of quirky co-workers.

Now Tudyk is playing no less than Bruce Wayne’s cousin, Van Wayne, in NBC’s new Thursday-night half-hour comedy POWERLESS. Created by Ben Queen, POWERLESS is set in the DC Comics Universe, crucially home of Batman. POWERLESS mostly takes place in Charm City, where ordinary citizens continual have to deal with the (literal, tangible) fallout of battles between superheroes and supervillains. Van is the head of Wayne Securities, where the R&D department comes up with devices like rubble-repellent umbrellas, perfect for when some super-powered evildoer knocks out the side of a building.

At a Q&A panel for POWERLESS sponsored by NBC during the winter 2017 Television Critics Association (TCA) press tour, Tudyk answers questions, then takes time afterward for some more informal conversation. 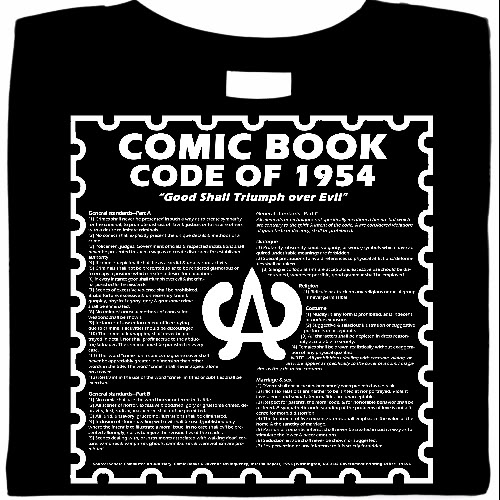 When did Tudyk come aboard POWERLESS?
“I just finished CON MAN

CON MAN, Tudyk adds, has its own special way of fitting into his schedule.
“I’ve always stacked CON MAN on top of other things like a mental patient. I edited the first season of CON MAN while doing ROGUE ONE. So I would work on it all night ‘til 2, go to work early in the morning, get my notes back – it was tricky, but this just kind of came along at the perfect time and you never know truly with TV shows, if you like the pilot, if it’s going to be able to grow as a story, if you can tell story after story, and I’ve been really happy with it so far. I think people are going to like it.”

With everything else going on at the time, why did Tudyk decide to return to half-hour comedy?
“I’ve been lucky enough to do a lot of different things, and the main reason I’ve been able to do that is because I take a script or whatever project that comes along, and when I think something is special and when I think something is funny, I’m very attracted to it, and this [POWERLESS] is funny, and that’s not easy. I’m just very happy.”

Van wasn’t conceived as being part of the Wayne family when Tudyk first got the role. What sort of changes did he make when the character became Bruce’s cousin?
“Everything kind of changed at once there with my character when we did the switch,” Tudyk explains. “He became much more optimistic, forward-thinking, as a person. And the target of my drive was to become part of [Bruce Wayne’s] world. But also, it’s not just some general idea of being someone who’s really rich and who has been pampered throughout his life – he’s a Wayne. As we know, Bruce Wayne is huge and in Gotham. So [Van] has the burden of the name, he also has the brilliance of the name that he’s been able to trade off his entire life. But he’s the guy who lives in the little city with the little company [Wayne Securities] and the invitations get lost in the mail on the way to big Wayne functions. It just made it a lot more complex. And yeah, I’m excited to keep doing it. I just met Corbin Bernsen, who plays my dad, not too long ago. He’s on the board of Wayne Industries, so …

“My dad sort of ran the company, and [as Van] I have these aspirations to move up in the world in Wayne Industries, it really ties into the superhero world. It doesn’t make it just any show where you can be a guy who is in the company that his dad runs, and you are rich, and you are spoiled and all of that. This is all part of the superhero world that we have that POWERLESS is in. So it really helped ground the whole thing.” 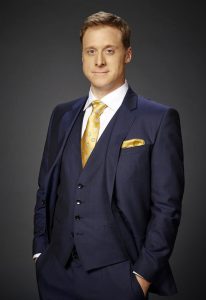 Since Van is a Wayne, might he ever become Batman?
Tudyk laughs. “I don’t put anything past Van Wayne. He could come up with an idea where he thinks he can be Batman. He’s a fool, so he might do something foolish like that. But he’d never be good enough – he’d be the worst Batman. He’d be the bat without sonar that bumps into the cave walls and can’t figure out how to eat insects. He’s a fun character to play, absolutely. He has power and he’s not smart. I’d say he’s trying, but he isn’t, really. He’s kind of happy in his own ignorance and when everybody does well around him, he’s like, ‘Great, I should get a promotion. Look how well everything’s going.’”

When other characters try to point out to Van that he’s taking credit for their achievements, Tudyk observes that Van’s response is,
“‘That’s funny how your mind puts that with that. It’s not at all. It’s me.’ He’s really fun to play. He’s blithely stupid, so I look forward to playing this guy as long as I can.”

Most of the other POWERLESS regulars – Vanessa Hudgens, Danny Pudi, Ron Funches, Jennie Pierson – are part of the R&D team. Van’s assistant Jackie (Christina Kirk) is often part of their adventures.

Does Tudyk feel he’s missing anything by not playing a character who’s part of the group?
“No, I get to do plenty. It’s really great how they mix things up. It really is a testament of the premise of the show that you can plug people in and move people around. One cool thing about this show is that we have all these great relationships with each other’s characters. [There is] an episode where Danny and Ron and my character are together through most of it. But it isn’t boys’ night out. It’s even more interesting than that. it isn’t that idea. That would be easy, ‘We’re going to have a boys’ night out and something comes from that.’ It’s actually really, really cool. I think it’s a testament to a good show, a well-written show, that you can have characters be put in and plugged into different relationships. It’s not always the two of us doing our same thing, playing out the same storyline.”

As the POWERLESS actor with the greatest experience in the science-fiction/fantasy/comic book genre, Tudyk is naturally asked if he grew up loving the genre.
His cast mates jokingly lean in, as if hanging on his answer. Tudyk plays along with an expansive gesture. “Gather round, gather round. Yes, but I don’t think more than most people. I did a TV show called FIREFLY that was canceled.”

“Stop clapping when I say that [canceled] part,” Tudyk deadpans.

Tudyk continues. “And it was canceled …”

“I know, too soon,” Tudyk agrees. “But I went into the sci-fi world from there, really, [and] I really kind of got serious about it, went to a bunch of cons. I went to Comic Cons and things like that for years. I think it’s a great world. There are so many acting opportunities within that world, of all of the worlds that are created. There are so many high stakes and imagination that you can just indulge in. I really enjoy it personally.”

Setting a comedy like POWERLESS within a science-fiction universe, Tudyk notes,
“It’s a great place with all of those high stakes to put a comedy, especially when you have these incredible events happening and people are just dealing with their mundane [lives], if you have ice villains warring in the city, then it’s what people have to deal with whenever they get an ice storm. You know, getting to work is a problem, the thermostat’s broken, things like that. But you also have these grand demigods running around the city and poking fun at them. Marvel does that really well, and I think it’s about time DD did it, and so we’re doing it.” 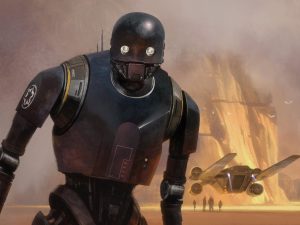 Does Tudyk miss the Lycra outfit he had to wear to play K-2S0 in ROGUE ONE?
He laughs. “I don’t miss that. I do miss the stilts, though. Those were really cool. I liked being 7’1”. That was neat.”

Although – spoiler alert – K-2 doesn’t make it out of ROGUE ONE, would Tudyk want to return to those stilts for a prequel?
“Absolutely. This is what I want – if I could draw up my own ticket, it’s Diego Luna and I doing some Cassian and K-2 stories, prior to meeting Jyn, when he’s just being a spy, and we’re just two spies on the run.”

K-2 is arguably the breakout fan favorite character from ROGUE ONE. What is Tudyk’s reaction to becoming a beloved part of STAR WARS lore?
“I’m really happy people like him. I didn’t think about doing a droid in the STAR WARS

universe, how important it is, at least, how important the other droids are to me – I didn’t think of myself as being one of them until I guess I saw it and saw people’s reaction. It’s humbling, it’s hard to get your head around. I haven’t been able to go to a con [since ROGUE ONE was released] yet – I can’t wait to go to another con, because I feel like that’s the sounding board I need, to meet fans.” 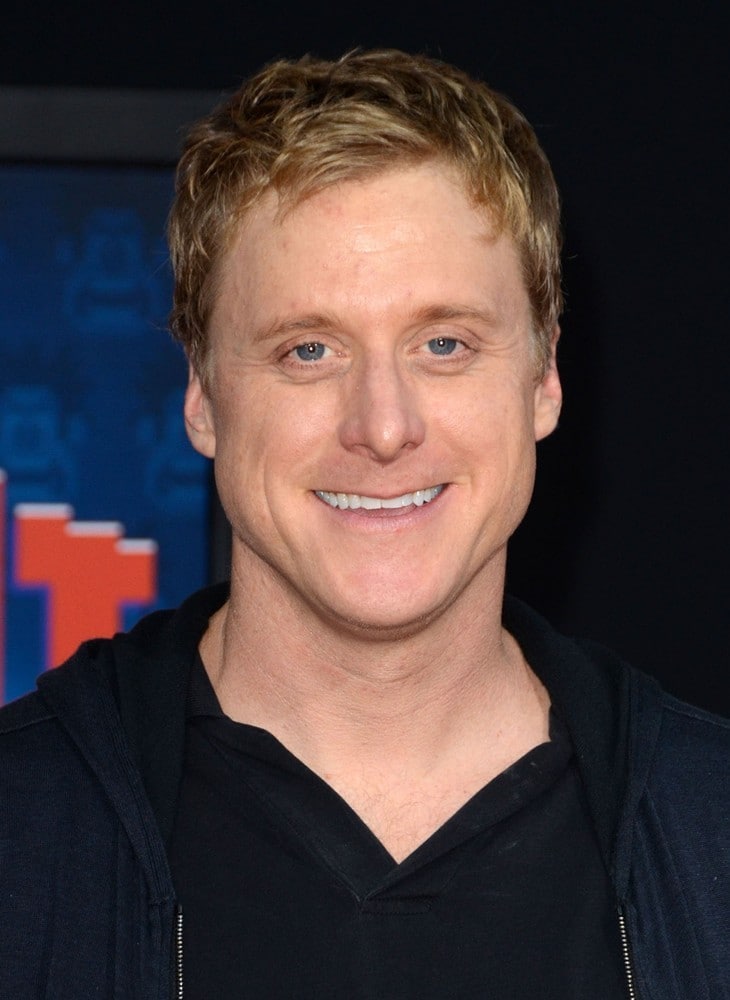