JMW: Hello. This is Jean Marie Ward for BuzzyMag.com. With me today are Mary Elizabeth McGlynn . . .

JMW: . . . and Richard Epcar, the voices and directing talent behind some of your favorite anime, cartoons, and foreign movies. Welcome.

JMW: Yeah, let us not forget animation. Absolutely. What’s involved in directing the human talent in a cartoon or anime or animation?

Richard Epcar: You want to start?

Ghost in the Shell
Complete Collection

Mary Elizabeth McGlynn: Well, it depends on what kind of animation it is. If it’s a prelay, then you give the entire cast the script beforehand, you get them all in a room together, and it’s like directing a radio play. Which is fantastic, because you get to see them play off of each other, and it’s really quite a magical experience. And when we do ADR . . .

Richard Epcar: Yeah. It’s great to do original. It’s much easier that way. It’s more like performing. But when you’re doing the ADR, you have to pay close attention to lip sync, and try to make sure that the dialog fits in the mouth, the lip flaps of the character that you’re doing. So it’s a little more difficult to do, actually, to make it sound naturally flowing.

JMW: What is ADR? Because this is for a general interest magazine.

Mary Elizabeth McGlynn: So we’ll get the materials in Japanese or French, whatever language it’s in, and then we give that to the writer, along with a translation, and they then adapt the script to the animation, and we go in and record it usually one character at a time. One actor at a time, kind of.

Mary Elizabeth McGlynn: So you kind of sit around and talk to the TV all day. It’s really quite fun. And in terms of doing it, it’s like recording one instrument at a time, if you’re doing a symphony. It’s really lovely.

JMW: And then mixing it all together.

Mary Elizabeth McGlynn: Mix it all together. Yup.

Richard Epcar: Putting all the puzzle pieces together.

Mary Elizabeth McGlynn: Yeah. It’s our job to make sure that people sound like they’re talking to each other, even though it’s only one . . . like, the first actor in isn’t speaking to anybody. He can’t play off anyone. So it’s our job to make sure that they sound as if they are actually speaking to someone. I think that’s the biggest challenge, as well.

JMW: Is there a difference between working on an American property like “Iron Man” or “Wild Animal Babies” — and an anime like “Naruto“?

Mary Elizabeth McGlynn: Well, “Wild Animal Babies” was original. So again, we had the cast members in a room together, and it was just lovely to have the three of them play off of each other. And the “Iron Man” was in conjunction with Japan, but it was an ADR situation, so we had . . . Norman Redis was in playing The Punisher, so we had him in, and he was in advance. Great actor, very fun to play with. And “Naruto” we’ve been doing for nine years, almost, and it’s like a well-oiled machine. Miley Flanigan and Yuri Lowenthal and Kate Higgins are just amazing. They know their characters so well. So it’s easy to do after this many years.

JMW: Yeah. How easy is it to direct each other, since you’re both directors and you’re both actors?

Richard Epcar: And we both work really well, and we’re fun to work with.

Richard Epcar: So we don’t have a problem at all with that.

Mary Elizabeth McGlynn: Yeah. It’s fun to take off the director’s hat and be steered by someone else for a while. Which is great. I trust Richard implicitly, so it’s very easy.

JMW: I was about to ask. How did you get into the gaming business?

Richard Epcar: Well, actually, the way I got into the gaming business was through the anime shows I worked on. Because I was doing “Loupon” and “Ghost in the Shell,” and we had some games that we did with those shows and a few of the other shows that I was working on. They had the games. So I was able to kind of make the leap into the game world through that. And then from there, I started working on other games that I started getting into the game world.

And some of the games are like the anime. They come from Japan, they’re already in Japanese, and we revoice them, the same way we do with the anime. So I did a lot of that. And now I’m doing a lot of the original animation games, so I’m really, really happy about it. The Joker in three Batman games, and I’m in “Kingdom Hearts,” and a bunch of other stuff that I do. So I’m really happy I was able to kind of make that transition, to be honest with you.

Mary Elizabeth McGlynn: The same. Same thing. I used to do a lot of . . . well, it’s from the anime. And actually, my first thing ever directing before “Cowboy Bebop” was a game, “Macross.” One of the “Macross” games. And so I just started doing more and more of those. I recently directed a Pachinko game in Japan, which was really fun, because I love Las Vegas, so I know all about slots. It was really fun just to go to do that.

Mary Elizabeth McGlynn: And just recently, I got to voice the new Crusader, the female Crusader for “Diablo III.” Which was really amazing, because it’s basically, you get to replay the entire game. So I got to play off of all the other voices going through about 20 sessions. So it was really an unbelievable journey to be able to hear all my friends, as well. Steve Blum and Troy Baker and Jennifer Hale. And it was great to play off of them.

And it’s also fun to direct them, because it’s not so much structure as the animation is, or as the anime is. It’s also very taxing, because a lot of battle cries, and fighting efforts, and screaming and yelling.

Mary Elizabeth McGlynn: It can really do a number on your vocal cords after a while.

JMW: And having to keep your vocal cords up for 20 sessions must be really something.

Mary Elizabeth McGlynn: Yeah. Yeah. But this wasn’t a lot of screaming and yelling, so it was great.

Richard Epcar: . . . those warrior games, or combat games. And there’s just a lot of screaming involved. And those are the hardest games, or the hardest voice work to do, because you’re constantly yelling.

Richard Epcar: Screaming. That’s the hardest thing on your throat.

JMW: Mm-hmm. Yeah. I can imagine. How did you get into this crazy business? I mean, voice acting, directing. How did it happen? I keep hearing from you musical cues, and I’m wondering, did you start in music?

And I was doing an episode of “Xena: Warrior Princess” and the horse that I was being hanged on fell on top of me and dislocated my kneecap, so I started . . . a friend of mine recommended me to this company, Magnitude 8. He was talking about Zava’s company. And I started doing voiceover for them. And a couple of years later, they had too many shows and not enough directors, so they said, “Do you want to direct a show called ‘Cowboy Bebop‘?” And I said, “Sure.” And that was it. And I’ve been doing it ever since.

Richard Epcar: For me, I came out to LA as an actor, an on-camera actor, as well. I still do on-camera. I did a lot of soaps and episodic television and movies. And basically, my wife, who was my girlfriend at the time, was in this little film, and the company that did that film had another film they wanted to replace the voices in. And so they asked her to audition. She said, “Can I bring my boyfriend with me?”

And so I went with her, and the guy said, “Have you done this before?” And I said, “Oh, yeah. I’ve done it a million times before.” I never did it before in my life, but I took to it like water, because like Mary, I’m a drummer and I have music in my background, and it’s very rhythmic, doing dubbing. So I took to it, they loved it, I got the lead, and then I did a bunch of projects with them.

Then somebody one day came to me and said, “We need a director for this animated feature. Can you do that?” I said, “Sure I can do that.” So I did it, and it went really well. And then they had a bunch of other projects for me. So I just never stopped working since then. It’s been three years. So it’s turned out to be a great . . .

Richard Epcar: Yeah. Great thing of kismet for me.

JMW: Okay. Well, I know you have a lot of fans, and you need to get back to them. So I’ve just got two more questions.

Mary Elizabeth McGlynn: Again, the Crusader and “Diablo III,” the extension. And all kinds of stuff I can’t talk about. But those I can.

JMW: How do you keep them all straight?

Mary Elizabeth McGlynn: I don’t. That’s what I have [inaudible 08:38] for. Otherwise I have no idea.

Richard Epcar: And I had a couple of new games come out. “Saints’ Row 4” and “Final Fantasy XIV,” which I’m very, very proud to be part of. A lot of other stuff I’m working on. I just co-directed one of the . . . probably the biggest game that’s ever been made, right now, so I can’t talk about that, unfortunately. I just played the Joker in another game, which I can’t talk about either. And hopefully Mary and I will be dubbing the new version of “Ghost in the Shell: Arise,” which we really hope that that’ll happen.

As far as anime, I just did Inspector Xenagod on the new “Lupin the Third” [inaudible 09:15], which just came out. And just tons and tons of projects always happening, so we’re always busy.

JMW: Yes. I was about to ask you, what about “Ghost in the Shell,” because my husband would kill me if I didn’t.

Richard Epcar: We hope so.

Mary Elizabeth McGlynn: But if not, we’ll be totally supporting of Funimation if they do . . .

Richard Epcar: But if not, we will find them and we will destroy them.

JMW: That sounds good to me.

JMW: Somebody’s got to do it. Thank you both so much. 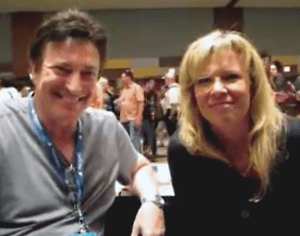