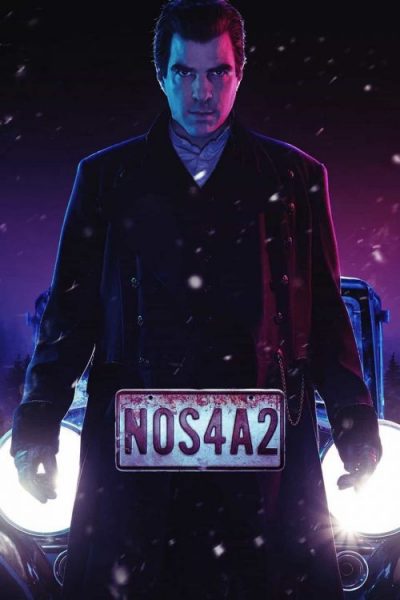 NOS4A2, the horror/fantasy series based on Joe Hill’s best-selling novel, is now in its second season Sunday nights on AMC. Adapted for television by Jami O’Brien, NOS4A2 focuses on two people with unusual abilities.

Ashleigh Cummings plays Vic McQueen a young woman who can find lost things with the help of her “knife,” actually a motorcycle, that carries her across the Shorter Way Bridge to locate whatever it is. Charlie Manx is an immortal who has created an “inscape” known as Christmasland. This is where Charlie brings the children whose souls he has consumed in order to keep himself young. The license plate on his vintage Rolls-Royce Wraith (Charlie’s “knife”) reads NOS4A2.

At the end of NOS4A2 Season 1, Vic learned she was pregnant by her boyfriend Craig (Dalton Harrod). Charlie caused death Craig’s death, but Vic was able to set fire to the Wraith, apparently burning up the vehicle and putting Charlie in a coma. 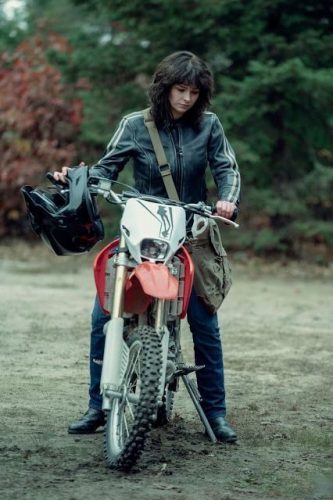 Cummings grew up in Australia, her parents’ country of origin, although she was born in Saudi Arabia to Australian parents. Cummings began acting professionally at the age of fifteen. She was nominated for acting awards for her work in the TV dramas PUBERTY BLUES and MISS FISHER’S MURDER MYSTERIES, won an award at the Venice Film Festival for her performance in HOUNDS OF LOVE and received a Best Actress in a Drama Series award from Women’s Image Network for the first season of NOS4A2.

Quinto, originally from Pennsylvania, is famous for his portrayal of Mr. Spock in the J.J. Abrams STAR TREK films. He originally gained notice as the somewhat Charlie Manx-like power-eating character Sylar in the TV series HEROES. In 2018, Quinto starred on Broadway as Harold in the revival of THE BOYS IN THE BAND, a role Quinto has reprised in an upcoming big-screen remake.

When AMC throws a party for the Television Critics Association (TCA) press tour, Cummings and Quinto were hanging out together. They’re not allowed to say much about NOS4A2 Season 2, but here’s what they can tell us.

For starters, they adore one another. “I love Ashleigh so much,” Quinto declares.

“Even though our characters hate each other,” Quinto points out.

Hang on a minute. There was a time, albeit brief, where Charlie idealized Vic and wanted her to come to Christmasland to be the mother of all his soulless children.

“I would have been a wonderful mother,” Cummings contends.

Cummings can tell us that Season 2, like Season 1, is ten episodes. She’s happy about the time jump in the story between seasons, as well as playing mother to an eight-year-old. “I loved it. I didn’t want to say goodbye to my fake child,” We wrapped [in January], and I really fell in love with Jason, who plays my kid, and trying not to be too clucky. So I’d say it was a success.”

When Vic uses her powers, her eyes get bloodshot; the more she extends herself, the bigger a toll it takes on her body. Does the makeup for Vic’s stressed-out state help Cummings play her, or is it simply uncomfortable? “I really love the makeup that we do, because we have no interest in making her look pretty. It’s not a makeup look. The only makeup that I have this season are bags around my eyes, and splotchy skin. We try not to cover up any acne, or any blemishes or whatever. So I’m really proud of that, that we’re portraying a female hero who doesn’t fit the mold. I grow out my eyebrows, and I don’t shave my legs. She’s not a woman who would do that. And I put on a bit of weight, because she wouldn’t have access to seasonal organic food, it would just be a lot of cheaper fast food nearby.”

Quinto is sometimes in very heavy prosthetic makeup, as when Charlie is depleted, he shows his true age. The Manx makeup was created by Joel Harlow, who also handles Quinto’s Spock look for STAR TREK. “The thing about this season is,” Quinto says, “it’s kind of book-ended with the extreme looks. So in the early part of the season, I’m really in extreme looks, and in the later part of the season. In the middle, I was like, ‘Maybe could we just dial it back a notch?’ So less makeup in the middle.”

Both actors use accents different than their real speaking voices for their NOS4A2 characters. Quinto praises Cummings. “Ashleigh’s a master of accents. She really maintains her American accent while she’s shooting even between takes, which is, I think, impressive. I just talk sort of like old-timey. I’m wrangling an old-timey accent.”

Cummings laughs at Quinto’s self-description. “He’s got a Manx flair, which I love. I constantly flip between Australian and American without realizing it. Half the time when I’m doing it on set, I don’t actually realize I am. And I’ve noticed if I get frustrated with my partner, my American accent comes out, which is a little bit strange. Even today, I kept speaking [in an American accent] for no particular reason.”

Quinto moves away briefly to greet a friend, leaving Cummings to field more questions. Vic is passionate about motorcycles. Did Cummings have to learn to ride one for the role? Turns out, nearly everything is either stationary or done by the stunt double.

“I’m not even allowed to turn it on for insurance purposes,” Cummings explains. “I’m actually not allowed to do anything with it for real. I knew a little bit about motorbikes from when I was about sixteen. But we have an amazing vehicle department, and they helped me a lot with making sure I looked comfortable on it. But I wasn’t allowed to turn it on, I wasn’t allowed to ride it at all. I can kick-start it, but we have to have all the engines off and everything. So I know how to do everything, but it’s never turned on.”

Without spoiling anything, can Cummings say if the NOS4A2 series is still following Hill’s book faithfully, or if it’s deviating in Season 2? “We definitely still follow the structure of the book. It’s such incredible source material, so we want to utilize that as much as possible. We have our own liberties, obviously, to make it work with my age and so on, and just to make it work in the television context, but yeah, we still have the book at the core of the whole show.”

Does Cummings have a favorite episode or favorite scene from Season 1? “I really loved a scene that I did with Virginia Kull, who plays my mum, in I think it’s Episode 8, and there are multiple scenes with Ebon Moss-Bachrach, who plays my dad, that I really enjoyed doing. I have so many favorites with every single cast member, but I really gravitated towards the family drama stuff. I really connected with that a lot.”

Quinto returns in time to answer a final question. What would he and Cummings most like people to know about NOS4A2 Season 2?

Quinto responds, “I would say Season 2 does a really good job of honoring the book, but diving deeper into who these characters are, and what their relationships are to one another. I think that the narratives are elevated, and the relationships are deeper, and it’s really an exciting season.

“Gosh,” says Cummings. “I’d love people to know that we go on a roller-coaster, both emotionally and physically. It’s far more action-packed than it was last season, but I think that it’s really grounded in this visceral emotionality and exploration of mental health, and trauma of the challenges of motherhood. I love that we’re not portraying a flawless hero or heroine. All of our characters are really complex, as per usual. And I’d just like to see it. I’ve been so inside of it that I have no concept of it, really.” 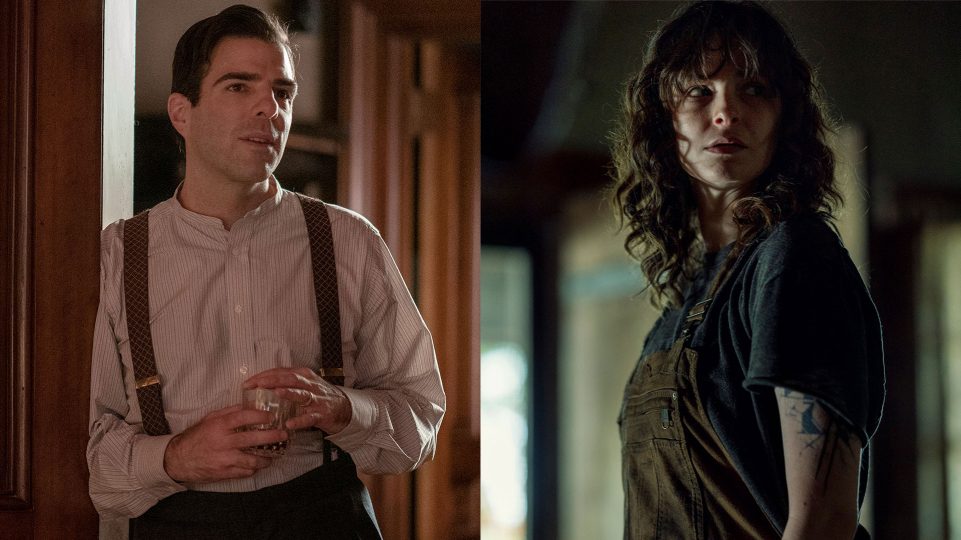