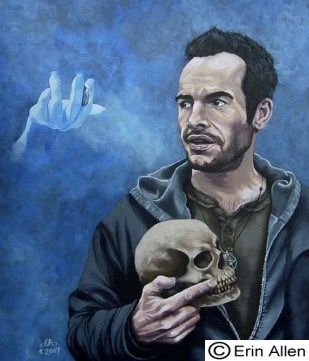 If you are not familiar with the fictional character, Bob the Skull, from Jim Butcher’s “Dresden Files” series of best-selling books, what you are about to read will bring you up to speed on the character and teach you everything you need to know. I dare say, you’ll be able to carry on a conversation with a Dressie* and pass as one of us. If you’re already a fan of the “Dresden Files,” not only will this article be a good refresher for you to read and brush-up on your Bob knowledge base, but it will also help you ferret out folks who are trying to pass themselves off as fans, and therefore, cool.

Bob the Skull started his literary life as many of Butcher’s creations do—someone presented him with a challenge. Way back in the day when Butcher was unpublished and still working on pulling the pieces of the “Dresden Files” together, he realized he needed a means to explain the mechanics of magic to his readers without info-dumping. Debbie Chester, his writing teacher at the time, advised her student that by adding a character to specifically discuss the nature of magic with Harry was fine, but to be careful not to make this new character a “talking head” (a character whose sole purpose is to dispense information).

Jim Butcher is a snarky guy who apparently loves a good pun; Bob the Skull was born. Described as looking like a bleached human skull, Bob, when active and talking, has pale yellow lights that appear in the eye sockets. It takes a few books to get the character’s history, some of which is still a mystery, such as why Queen Mab is angry with him, but here it is in a nutshell:

Bob is a spirit of intellect bound to a human skull by Etienne the Enchanter during the Middle Ages in France; Etienne was burned at the stake during the Inquisition. At this time Bob was not called Bob, he was simply a tool used to assist wizards in the lab, like a talking book.

As a spirit of intellect he is unable to make moral differentiations between good and evil, as he simply dispenses knowledge; he has no control and little interest in how the knowledge he gives is applied or utilized by the wizard. Additionally, the spirit is unable to forget anything he has learned unless he is directly commanded to do so by his current “master.” This has proved to be as troublesome as doing so created Evil Bob.

Of particular note, the spirit of intellect tends to take on something of the personality of his current master; one may assume this is so he can be a better lab assistant, on some level inferring what his master’s needs are or where his train of thought is heading, thereby making him more able to fulfill their needs.

After having been created and utilized by Etienne, the skull’s next master was the very evil warlock and necromancer, Heinrich Kemmler. For about forty years the two pursued the dark arts, practicing what the warlock called “true magic,” the magic that controlled life and death. During this time, an era Bob prefers to forget, he had no personality; he did nothing but spew information when commanded to do so. The White Council considered Kemmler too dangerous a warlock to live and passed a death sentence upon him. According to the skull, Kemmler was killed by the Council first in 1890, then again near the end of World War Two, and again in 1961. The skull was with Kemmler for a significant period of time, during which the necromancer did a great deal to warp the spirit’s budding personality.

After the 1961 slaying of Kemmler the White council believed Bob was destroyed; in fact, the skull was taken by Warden Justin DuMorne. It was while the skull was under the control of DuMorne he was instructed to forget the work he did with Kemmler, as the knowledge could not be destroyed. The spirit trapped within the skull is knowledge, it’s literally the stuff he’s made of; telling him to forget something is no different than asking someone to chop off an arm.

After a sixteen year-old Harry killed his Uncle DuMorne, he picked up the skull as he made good his escape from the mansion. It was Harry who Named the intellect which resided inside the skull Bob; previous to this he was only ever called “spirit.”

As a lab assistant, Bob the Skull is able to assist Harry by answering questions about the nature of magic and how it works in addition to identifying items, recanting historical information, and divulging the components and processes to make magical potions. Naturally, knowledge comes with a price and although Bob is fairly good-natured under Harry’s control, he still demands something of a payment for his services. Most often Bob asks Harry for access to trashy romance novels, the smuttier the better, but on occasion, when Bob knows he has Harry over a barrel, he’ll ask for furlough—twenty-four hours of freedom outside the skull to do as he pleases. Harry has never given Bob completely free reign, but has let the spirit go on his jaunts with provisions, such as, no more orgies at the local sorority. Although he is not a complete pervert (some parts are missing, haha) he does know a great deal about women and relationships, mocking Harry when appropriate, saying “Harry, what you know about women, I could juggle.”

After Harry was almost killed, mostly dead for a while, Bob was taken by Doctor Waldo Butters who, unlike Harry, was not shy about using the spirits knowledge to improve his functionality and boost his magical ability. Although Butters is what I would consider a high functioning adult, as he is a medical examiner for the city, he is also something of an uber-nerd, not just a gamer but also a huge fan of polka music. Since his master is now Butters, Bob’s personality has shifted, but not a great deal. He is still cracking wise and making with the jokes, a trait Butters has himself, but he is more mature with how he goes about his humor. Since coming into Butter’s possession we have learned Bob is, as far as spirits go, attractive, appearing as a mortal man in the spirit realm. The interior space of the skull has been fully decked out with a lavishly set dining room table filled with a Thanksgiving feast. Butters, not being a wizard, is able to keep electric appliances in his home, thereby granting Bob access not only to Xbox and Netflix but also the internet.


Bob the Skull is the classical Jungian archetype of God. Bob the Skull, in spite of being a spirit, is the epitome of maleness and masculinity who when asked a question by Harry tells him what he needs to know and not necessarily what Harry wants to know. Bob can only offer advice; he will never give more information than was asked for and no matter what path Harry chooses to take, Bob will never judge, although he already knows Harry walks the Way of the Hero.

So, with the release of Jim Butcher’s new installment of the “Dresden Files”, “Cold Days” now available, keep all these new and useful Bob info bits at the ready. You never know when they may become useful, either in understanding the books or testing someone who claims to be a fan.