Doctor Who and the Krikkitmen – Book Review 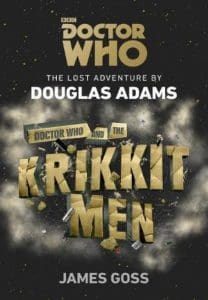 The Doctor and Romana arrive at Lord’s Cricket Ground just in time to witness a horde of killer robots steal the Ashes. Cricket, it transpires, is nothing more than a hazy race memory in very poor taste; the echo of a multi-genocidal galactic war long ago dealt with but now threatening to break out afresh. And that’s not the worst of it. If the robots succeed in reassembling the wicket gate and bails that keep their masters imprisoned, plans are afoot to see the entire universe destroyed.

seems a strange one, for two reasons. Firstly, because Krikkitmen was never actually scripted,let alone produced or broadcast. (Douglas Adams pitched the idea in 1976 but was rejected. He subsequently wrote a 30-page film treatment that went no further.) Secondly, because the novel has, in fact, long since been written Adams handled that himself when he excised the distinctly Doctor Who elements and reworked Krikkitmen as Life, the Universe and Everything (1982). Why then did BBC Books see fit to pit Adams in posthumous collaboration against himself? Co-author James Goss may have performed adequately in novelizing City of Death (2015) and The Pirate Planet (2017), but these were voids that needed filling. Krikkitmen’s appearance is simply baffling.

One possible explanation is that Life, the Universe and Everything is itself somewhat underwhelming as a Hitchhiker’s book. It contains sparkling ideas and some uproariously inspired writing, yet there remains a feeling that something is missing; namely, the central character. When read in the knowledge that it started life as a wannabe Doctor Who story, Life, the Universe and Everything evinces a Doctor-shaped absence around which the other characters shuffle awkwardly. The novel is brilliant, but flawed; it moves the reader to wonder, What if this had been written as Adams first intended? But there is danger in pursuing such idle fancies. Again, two points:

Firstly, Adams clearly recognized the new hole in his Krikkitmen plot, and what he came up with to fill it was some of his finest work: Arthur and Ford’s escape from prehistoric Earth; Wowbagger the Infinitely Prolonged; the Starship Bistromath; Agrajag; the flying party; flying in general. For all that Life, the Universe and Everything floundered as a story, it was packed full of extemporized non-Who virtuosity that the current novel has had to leave out. Secondly, damningly, Goss has taken the one trump card he was dealt–the Doctor as hero–and failed to play it. Goss’s style is facetious in general. (This appears a misappropriation of the tone Adams so often used when outlining pieces he was yet to write.) Yet he saves the worst of it– the characterization most Arthur Dentishly ineffective– for his protagonist. By Goss’s hand the Doctor is rendered in outright caricature. There is no depth to his flippant outward persona, merely fraudulent charm. He is a lucky bumbler; the Time Lord equivalent of Inspector Gadget, muddling through his own mayhem and taking the credit while Romana and K9 do all the work. To be fair, much of this is quite funny, but it does Adams little justice to suggest he would have written the Doctor in so shallow a fashion.

Doctor Who and the Krikkitmen

is an easy read. Goss has been diligent both in fleshing out Adams’ film treatment and in retrofitting such concepts as War TARDISes and–from a lesser known offshoot of Hitchhiker’s– Genghis Khan as jaded conqueror. His style, however, is slavishly imitative, the pastiche farcically one-eyed. Goss, in short, tries too hard to be Douglas Adams, writing Doctor Who as if it were some quirky Hitchhiker’s digression. The result, in architectural terms, is a folly. As a schoolboy, Adams supposedly crafted a Doctor Who parody called Doctor Which? Nothing is known of this story (apart from Adams’ throwaway remark that he wrote it). Nonetheless, one can imagine James Goss circling it for collaboration.

More Doctor Who On BuzzyMag.com 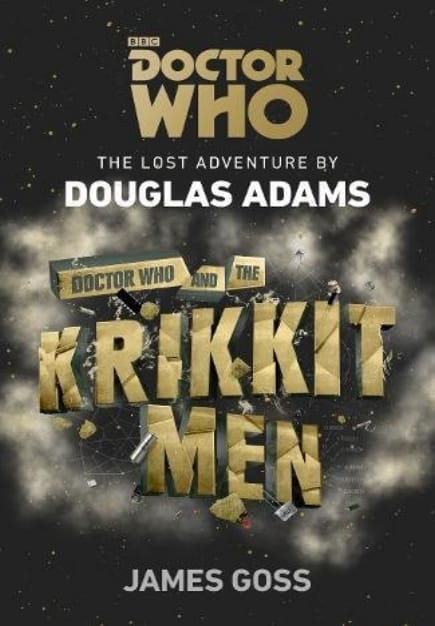 The Doctor and Romana arrive at Lord's Cricket Ground just in time to witness a horde of killer robots steal the Ashes. Cricket, it transpires, is nothing more than a hazy race memory in very poor taste; the echo of amulti-genocidal galactic war long ago dealt with but now threatening tobreak out afresh. And that's not the worst of it. If the robots succeed in reassembling the wicket gate and bails that keep their masters imprisoned, plans are afoot to see the entire universe destroyed.