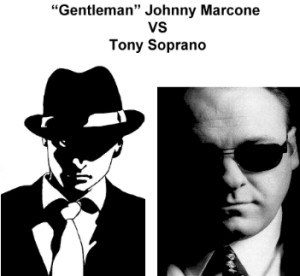 There have been all kinds of gangsters and mob bosses who have appeared in pop-culture over the years, but I don’t think anyone has bothered to compare and contrast “Gentleman” Johnny Marcone and HBO’s Tony Soprano.

In Jim Butcher’s series, “The Dresden Files,” there is a recurring character who is a mob boss in the city of Chicago. In the short story “Even Hand,” which takes place between “Turn Coat” and “Changes,” the narrator begins the story saying, “My name is something I rarely trouble to remember, but for most of my adult life, I have been called John Marcone.” The newspapers have dubbed him with the nickname “Gentleman” because no matter the situation, he is always calm, collected, and polite.

Apart from being a powerful criminal element in the city of Chicago, Marcone has also gathered a great deal of information about the supernatural. He personally met with Dresden to see if he was “the real deal” and after exchanging a soul gaze, never doubted Harry’s magical capabilities or commitment again. Marcone has even called upon and tried to hire the private detective to combat the supernatural forces reducing his profit margin or causing undo attention to be turned in the direction of his criminal enterprise. As the novels go on, Marcone becomes more and more entrenched in the magical realm, utilizing this knowledgeable asset to his best advantage.

Unlike nearly all other mobster cookie-cutter characters, John Marcone is three-dimensional. This I chalk up to Butcher being a phenomenal author; his crime boss not only has a clearly defined character readers can rely on, but a strong code of ethics he lives by, too.

Marcone is ruthless in his criminal pursuits. He has taken lives all throughout his career—both personally and by giving the order for the hammer to fall—but he is not without limits. Big, bad, murderous Gentleman Johnny Marcone has an affection for children. In “Small Favor” he put his own personal safety aside to expedite the rescue of Ivy; in “Even Hand” he helps Justine, who was caught as she attempted to save a kidnapped child from a Formorian. He even helped Harry Dresden acquire information when the wizard learned his daughter was kidnapped. But perhaps the most remarkable act of altruism Marcone pulled was stealing the Shroud of Turin. In the Dresden-verse this item is purported to have miraculous healing powers. When Dresden finally discovers the item’s location he comes upon a nearly repentant looking Marcone sitting at the hospital bedside of a Jane Doe who had been in a coma for years. Marcone confesses to Dresden the girl was more than an innocent victim in a drive by shooting, she stepped into a bullet meant for him. It was Marcone’s hope the Shroud would restore the girl to health and alleviate his guilt but sadly, it did neither.

Which brings me to the other guy…

Anthony John “Tony” Soprano, Sr. first came into America’s homes via HBO’s series “The Sopranos.” Originally promoted as a dark comedy (the show’s tagline was “If the mob doesn’t kill him, his family will”) the title character was loosely based on the real life New Jersey mobster Vincent “Vinny Ocean” Palermo. I am ethnically Italian; I was obligated to watch the show. I did and was not a fan. This is something for which I know I am in the minority; the six seasons the series ran it was wildly popular. As the series wore on, it dropped the dark comedy and tried very hard to become a drama. In my personal opinion, simply giving the title character an annoying family to interact with does not create legitimate drama. Sorry.

Tony Soprano is not a crime lord like John Marcone, but rather a low level street boss; he runs a crew of about ten men loyal to him and turning a profit, just not necessarily in that order. That being said, Soprano is a hardened criminal, a true psychopath with a short temper; he is an adulterer and a murderer who tries to balance his commitment to his mob family with the one he has to his wife and children. The television show tries to make the audience empathize with Tony by humanizing him, giving him a wacky, selfish, and self-centered family and makes him prone to panic attacks and bouts of depression. The writers of the show also made Tony a fan of the football team, the Giants, as well as the New York Yankees baseball team, two common enough traits for anyone who lives in the NY/NJ area.

Surprisingly, Tony was also an animal lover. Although he did not own a dog during the show, the character was traumatized when his childhood dog was killed. As an adult he enjoyed feeding the ducks who swam in his swimming pool and took great personal offence when his race horse Pie O My died. Tony suspected Ralph of setting the barn fire that killed the “sweet innocent animal;” having no evidence of Ralph actually committing the crime did not stop Tony from beating him to death with his bare hands while questioning him about the event.

All things being equal, John Marcone is not only the superior character when compared to Tony Soprano as he is more consistent and believable but also because Marcone exists in a well-rounded and thought out world. In a side by side comparison Tony comes off as your punch-drunk lug of an uncle who will show up for Christmas dinner in his jogging outfit with his annoying family and after a few drinks start crying about how he had a terrible mother. John Marcone surrounds himself with professionals devoted to him; he does not show weakness and no one has ever mistaken his kindness toward children as a soft spot. Marcone is a force to be both feared and respected whereas Tony Soprano is a guy who can be easily side-stepped.