Giancarlo Esposito on “Revolution,” “Breaking Bad” And “Once Upon A Time” 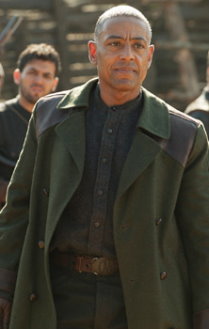 In the world of NBC’s new series REVOLUTION, created by Eric Kripke of SUPERNATURAL fame, all the electricity in the world suddenly stops. Fifteen years later, civilization largely consists of peaceful agrarian villages – but there are armed militias afoot. One of the most feared is led by Captain Tom Neville, played by Giancarlo Esposito.

Esposito was just nominated for a Dramatic Supporting Actor Emmy for his portrayal of the terrifying Gus Fring on BREAKING BAD (the award was won by Esposito’s costar on the series, Aaron Paul). This past season, he was also seen as Sidney Glass, aka the Genie of the Lamp, aka the Magic Mirror, on the first year of ONCE UPON A TIME.

In person, Esposito is the antithesis of those onscreen personas – he is as charming and gentlemanly as can be imagined. The actor was born in Copenhagen, Denmark, but his parents moved to Manhattan during his early childhood. Esposito first performed in stage when he was eight years old and began appearing in films and on television at the age of twelve. Significant roles have included Mike Giardello in HOMICIDE: LIFE ON THE STREET and Cassius Clay Sr. in Michael Mann’s fact-based drama ALI.

At a party thrown by NBC for the Television Critics Association, Esposito sits down at a poolside table and talks about what he’s been up to lately.

Tom Neville is a pretty intimidating fellow, but then, so is Gus Fring. Where does Neville rang on the Gus Fring scale of badassness?

Neville appears to be a much more physical character than Gus was – for starters, Neville rides a horse, something that delights Esposito. “I have to say that I’ve always loved old Westerns, I’ve loved the old swashbuckling pirate movies, and part of my thinking, when I took this part, was that he could be that, he could be a guy who’s very in touch with his physicality and uses it. Although in our pilot, he uses a .50-caliber handgun, a Desert Eagle, I’d like him to also be an excellent swordsman, but not in the same way that some of our other swordsman in the show are. I’m going to run this by Eric and talk a little bit about it, but not too much. [Neville] would probably be the guy who uses a foil, and that kind of sword is very different. You can’t overpower someone when you’re using [a foil], but you can get out of [the opponent’s] way and finesse and nick them to death. This is the kind of guy he is. But I do see him as a very physical guy. Like I say, I’ve always loved Westerns, so I really love the fact that I can ride a horse, and at any given moment, I want to break out into a strong gallop,” he laughs. “I hope you get a chance to see that on camera soon.”

Sword work for stage factored into Esposito’s early acting career. “I’ve always wanted to be an excellent foil fighter,” Esposito acknowledges, “and did some take some courses in New York at Seventy-Second Street at the Academy there, but never followed through, so I’m going to get back to that now and hopefully, we’ll have an opportunity to really finesse some of that.”

What did Esposito think when he saw the completed pilot for REVOLUTION? “I loved it,” the actor replies. “It really did represent a world that visually was beautiful. I really feel like this network is doing something that’s filmic – they’re returning to a filmic age. It was a shorter period of time [than making a feature film], putting that [pilot] together, but if we’re making little films every week, then we’re doing our job. This is a beautiful show and it will continue to be so in the location that we’re shooting in [North Carolina] and with the great craftsmen that we have working on it.”

Meanwhile, BREAKING BAD is going into its final season without Esposito, whose character Gus was blown up by the show’s protagonist Walt White (multi-Emmy winner Bryan Cranston) in Season Four. “I’m sorry I’m not going to be back,” Esposito says, “but it is worth it. I think that they created a really wonderful exit for me, and I’m proud to have been part of it, and I hope that, as BREAKING BAD says, that all the bad guys will have the ability maybe to come back. I’d love to be able to join them again for the final piece of their puzzle, if that’s possible.”

Gus had a final piece of business – mutilated by the explosion, he straightens his tie before collapsing. Was this the idea of BREAKING BAD creator Vince Gilligan, or Esposito himself? “That was born out of a conversation with myself and Vince Gilligan,” Esposito relates. “Vince wanted to know, ‘What do you think Gus might be doing if he were to go out in an explosive fashion?’ And I said, ‘What I believe he would be doing is doing what I always do. I’m always a person who straightens my tie and straightens my jacket.’ So we talked about it. I said, ‘You know, it’s got to be the tie. The guy’s a gentleman, he’s going to leave this world and move into a new world in a certain way and I think this is exactly what he would be doing.’”

As for reprising his role as Sidney/the Genie this season, Esposito says, “I hope there’s an opportunity to get back to ONCE UPON A TIME – I love it and my children love it – but this [REVOLUTION] is my first priority. I know Sidney’s in the dungeon, he’s sort of on ice, so if there’s a moment in time for me to get back to that show, I certainly will.”

The genie costume has great appeal for Esposito. “Oh, my God, did I ever love that outfit,” he enthuses. “I really do. I always wanted to play a character who was a genie. I feel like that’s a magical role to play, someone who can grant you any and every wish you might want, or the three wishes that you would want, but I loved the outfit. We shot that scene on a beach the coldest day there was in Vancouver, and it was raining. And the producers were so concerned about me, but I did some really deep yogic breathing that warmed my insides up and I kept my body warm somehow on that very cold day. I loved everything about it.”

Esposito also loved playing the romantic scenes opposite Lana Parrilla’s wicked Queen Regina. “Oh, I fell in love with Lana Parrilla. I felt like I was in the fairytale itself doing that show, because the costumes are so well-done, the writing is so good, and the Genie of Agrabah is a real Disney character [from the animated film ALADDIN], so I watched a few old genie movies, just to feel what that sense of that was like. It made me feel like I was in the films that I grew up with, and that to me was extremely special. It was like living a dream – living out my dream.”

In conclusion, what would Esposito most like viewers to get out of REVOLUTION? “Hope for a new world,” he replies. “The idea that we might crash one day, but we’ll know what to do.”