Guardians of the Galaxy – Movie Review 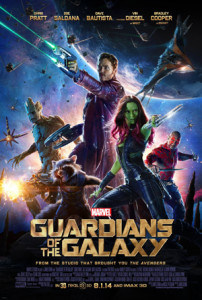 Guardians of the Galaxy throws you in at the deep end and turns away, confident you’ll love what you’ll see, but not really giving a darn if you do or not. And it blasts “Cherry Bomb” on a boombox at you the whole time.

This is a razor edge to walk–not stopping to explain much of anything, and depending on audiences to follow as new places, races, concepts, are thrown at them at high speed. But somehow the script works–it’s clever and well thought out, with plot twists around every corner.

Peter Quill is an unlikely hero, a rogue in the vein of Indiana Jones (only much, much sillier), who somehow ends up pulling together Gamora, Drax the Destroyer, and partners Rocket and Groot. They aren’t a team so much as a couple of random people that are coincidentally working toward the same goal–and against a common enemy.

There are homages to some classic genre movie scenes scattered throughout: Raiders of the Lost Ark, The Last Starfighter, Serenity, and even Daredevil get a nod. There’s music and dancing and action and chase scenes and stuff blows up. It doesn’t take itself too seriously, and that’s a good thing.

The cast is stellar. Really. Chris Pratt, who gets better with every movie he does, is both convincing and charming as Peter Quill aka Star-Lord. Zoe Saldana is an absolutely driven badass as Gamora. Bradley Cooper’s voice work makes you believe in Rocket’s intelligence and emotional fragility–while Vin Diesel can pack incredible meaning into “I am Groot” every time he says it (and the CG work on Rocket and Groot is amazing!). Dave Bautista absolutely sells the very literal dialogue that flows from Drax the 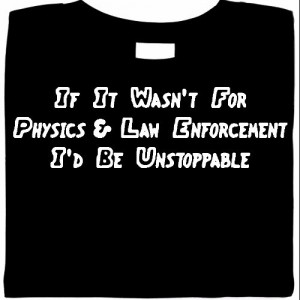 On the dark side of things, Lee Pace puts it out there and brings the crazy as Ronan the Accuser. He’s solemn and brooding and totally nuts. Providing serious back up for him are Djimon Hounsou as Korath and Karen Gillan as Nebula. Slightly less crazy is Michael Rooker as Yondu Udonta, head of the Ravagers, who can be swayed by cold hard cash.

Glenn Close is properly officious (and well dressed) as Nova Prime, and Benicio Del Toro is absolutely slimy as The Collector.

There are a ton of locations, each a different planet/body in space, every one with a distinct look. It didn’t look like it was all taking place on the same planet. Each space ship had a very different aesthetic and layout. The design details are nothing short of remarkable.

I was watching this movie so intently I barely remembered to take notes–I didn’t want to take my eyes off the screen for a second, for fear I’d miss something.

Guardians of the Galaxy is two hours of breakneck silliness that I wish had gone on for twice that long. Go see it. In 3D. And wear your seatbelt! 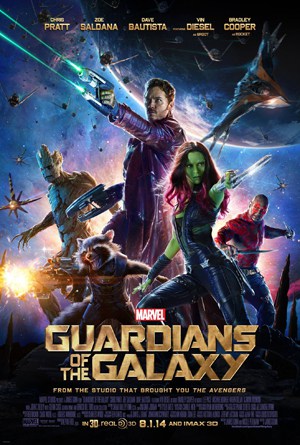 Article Name
Guardians of the Galaxy - Movie Review
Description
This is a razor edge to walk–not stopping to explain much of anything, and depending on audiences to follow as new places, races, concepts, are thrown at them at high speed. But somehow the script works–it’s clever and well thought out, with plot twists around every corner.
Author
Elektra Hammond
BuzzyMag.com