JMW: Hello. This is Jean Marie Ward for BuzzyMag.com. With me today is writer and editor Jaym Gates. Welcome, Jaym.

Jaym Gates: Thank you for having me.

Jean: We’re so glad you could be with us here at DragonCon. “The Shattered Queen,” your first collection of short stories, reads lot like an oratorio, a complex tale told in a multitude of voices. Was that always your intent?

Jaym Gates: It wasn’t my intention when I started out. I wrote one of the stories and realized that it was falling into those patterns. And so I started looking into oral storytelling and figuring out the…what I wanted to do with it and how much I wanted it to be intentional. So, I interviewed a number of people who did storytelling as an academic or a cultural thing.

I spoke to a professor out of Arizona that that was his focus in academia. I also spent a couple of hours talking to a Blackfoot elder from Montana about traditional’s oral storytelling. And ever since then, I’ve kind of tried to bring that into the stories a lot more. But I think it comes from when I was growing up, my family did a lot of vocal reading, a lot of singing. I sang choir as a kid, so I’m very much used to the patterns…and memorization and sound of speech.

JMW: You’ve been working on this one a long time. When did you first come up with the germs of these stories that made up “The Shattered Queen”?

Jaym Gates: So, I think the first one in there was my…or one of the stories and there was my first published story which…that’s seven or eight years ago now. The overall conceit of the collection actually came about just a couple of years ago where I started realizing that I wanted to tie these stories together and give them a framework because they were so scattered but they all had themes running through them. And so, I wanted to play with those themes and just bring in a little bit more weirdness into them.

JMW: And more apocalyptic feeling, I think. It is a very apocalyptic collection. And you mentioned that part of this was an outgrowth of your survivalist upbringing. Could you tell our viewers a little bit about that?

Jaym Gates : I grew up in a religion called “Seventh Day Adventism,” but I was on the very right-wing even of that. So, my grandparents firmly believed when I was growing up that we would have to leave our homes and flee into the wilderness because society would turn against us. And when you grow up like that, where you have that sort of end of the world could occur in my lifetime, it really does kind of change how you think.

So, we grew up…I grew up with having backpacks and camping gear and canned goods and preserving and growing a lot of our own stuff. And ever since then it’s something that I’m drawn to, that ability to survive. You know, I work in some crisis communications with natural disasters because the idea of what happens at the end of the world is fascinating to me.

JMW: Scary but fascinating. Speaking of scary and fascinating, you’re a writer who’s also worked as an editor and an editor who’s worked as a writer. Speaking of someone who’s done both, I find that they occupy very different parts of my brain. And those parts of the brain frequently get in each other’s way. How do you make it work?

Jaym Gates: I compartmentalize really well and part of that is having done so many things for so long working in publicity as an editor, as a writer. All of these different things. I have different mindsets for all of them. And it’s actually not that hard for me to switch between them because as an editor, I do not want to impose my voice on someone else. My job as an editor is to make your voice the best it can be to find ways to help you say what you are trying to say.

So you have to divorce your ego entirely from editorial work. And as a writer, you have to foster that. So I’ve actually had more issues fostering that in becoming able to toot my own horn as it were as a writer that I’ve ever had issues putting it away as an editor.

JMW: Yeah. That’s what I would think would be the hardest part. Getting away from the editor and the editor looking at your own work going, “Need to fix that,” but you’re not finished thinking it yet.

Jaym Gates: It’s really hard when you’re editing some of the best short fiction and novel writers in the industry to look at their final drafts and look at your own first drafts and draw that line. So, yeah.

JMW: Yeah. Very hard. Does it help if the project is in your wheelhouse fiction-wise or does it help if it’s a very different thing from what you write?

Jaym Gates: It depends on what kind of editing I’m doing. If I’m doing developmental editing, it absolutely does help for it to be in my wheelhouse because then I know the language that needs to be used, the beats, the pacing, all of those things. If I’m just copyediting it and I didn’t have any say in the developmental editing, it is different to be out of my wheelhouse because otherwise, I’m sitting there going, “but this would’ve been so much… I could fix this so I could make it better.” And it’s easier for me to just step aside and go, “not my circus, not my monkey.” It’s just, “take the typos out.”

JMW: I like that line. Where does your current anthology “Strange California” fall in that continuum of your wheelhouse or not my monkey?

Jaym Gates : I can’t think of any project that I will ever do honestly, that is more in my wheelhouse than “Strange California.” Jason Batt and I both are Californians to the bone and we had been talking about the weirdness of that state. And we just realized that there was an anthology there. And every single story we both just geeked out over so hard and it was so much what we wanted.

And there are some of the stories in there that…I mean, there are really good California stories, but what I love about them so much is that they’re also just standout science fiction fantasy stories. And there are a lot of them that really dig into sort of the cultural and moral and other issues that California is facing. So it really appealed to my political and crisis nerd, as well as my science fiction nerd.

JMW: How did the anthology come about?

Jaym Gates: Jason and I were talking and next thing we knew, I had an anthology which, to be honest, is how most of my anthologies happened. I don’t really know where they really come from. They’re just all of sudden, I am there editing them.

JMW: Well, that’s fun. And then it got crowdsourced and had an angel.

Jaym Gates: Yes. Yeah. It was 11th hour. We had someone step in and provide a lot of funding which was really the most California thing that ever could have happened. It was…we did really well, but it was at the time when Facebook started throttling the viewership so much. So, we both have big back-ins and we could not get the information to them, like, we would ask people, “Oh, I’ve never heard of this.” So, we were really, really grateful to that person.

JMW: Yeah. It’s a good thing they stepped in because I’m looking forward to that anthology.

JMW: But, speaking of different, you can’t get much further afield than your upcoming non-fiction anthology, “Star Wars Legends of Strategy.” Can you tell our viewers a little bit about that book and how you came to be involved?

Jaym Gates: So, Major Matt Cavanaugh actually reached out to me on the recommendation of someone I’ve worked with in the past, August Cole from the Atlantic Council. And asked if I would be interested in editing this science fiction, non-fiction project that uses the language of “Star Wars” to explain strategy both to civilians, to new cadets coming in, to people who maybe the shared American experiences not what they are used to.

Because you have this problem in teaching where, if you have, you know, a bunch of American students and a bunch of Korean students, they don’t have a shared cultural background. So it can be very difficult to find examples. But he found that “Star Wars” was a common thread between them. And, so, that kind of just grew out of there. We ended up with a lot of really good authors from both sides of, you know, the science fiction world and the hardcore, crunching military world, and those across to both sides.

Jaym Gates: So, currently I am the fiction line manager for Nisaba Press which is the fiction line for Green Ronin’s RPG world. So, we’re doing fiction set in Freeport, Blue Rose and Mutants and Masterminds. And then I’m also working on an RPG for them called, “Lost Citadel” which is essentially what happens when “The Walking Dead” meets “Lord of the Rings.” It’s a very dark, very end of the world, apocalyptic again.

Jaym Gates: I’m not trying to do all these apocalyptic things, I promise. RPG has a lot of high fantasy in it. And then I also am an acquiring editor for Falstaff Books. And theoretically, I’m going to start writing again. Well, we’ll see how that goes.

JMW: Well, we hope you do soon.

Jaym Gates: Just that I think that there are so many good short fiction authors and so much talent coming up in the field, like, I’m really excited about where the field is going, and I’m so happy that I get to edit it because I get to find some of these people and help push those voices out into the world.

JMW: That’s a great place to end. And it’s a very hopeful thing in contrast to your apocalyptic…

Jaym Gates: I am a hopeful person, I promise. 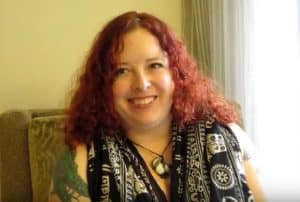 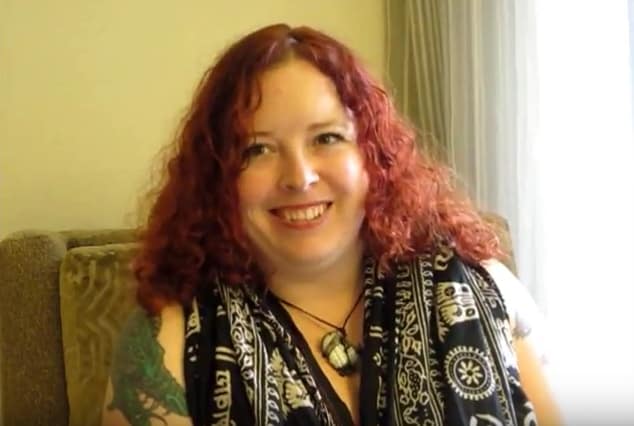 With me today is writer and editor Jaym Gates. Welcome, Jaym.