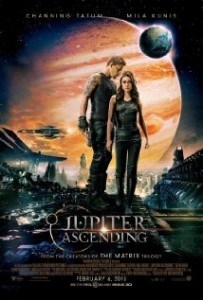 The vast majority of film critics are trashing Jupiter Ascending. I would like to say to critics and movie goers everywhere, Jupiter Ascending is better than the last 3 Star Wars movies.  In a world where Revenge of the Sith gets an amazing 80% on the Rotten Tomatoes Tomatoemeter, perhaps Jupiter Ascending should not be totally eviscerated.

Visually, this film is stunning, yet I am happy not to have seen it in 3D. My guess is the SFX would have made me nauseous. Some of the acting is appalling, some fair to middling but folks going to see a space opera are generally not expecting the Royal Shakespeare Company.  Milas Kunis acting is not up to that of Angelina Jolie but she was okay and I’ll bet there wasn’t a straight male in the audience that didn’t appreciate her being onscreen. Channing Tatum looked quite nice in his pointed ears and fangs not to mention the amount of time they kept him shirtless. Sean Bean as usual delivered a solid performance. Unfortunately the affected gravely whisper of the decadent and twisted primary villain, Balem Abrasax as played by Eddie Redmayne, was particularly grating on the nerves. The actors were all in top action adventure physical shape and they needed to be at peak condition to keep up with the demands of this production.

When I think about the money spent on this film, couldn’t they have afforded to pay someone to run over the script for glaring errors? Perhaps that someone would have noticed the complete ignoring of the laws of physics. How about someone giving an explanation as to why those laws don’t apply to this Wachowski story? This is not supposed to be the Matrix where the action is all the heads of the players. Among the most eye rolling moments I experienced in this film include centrifugal force affecting inanimate objects but not people. Someone getting tossed out an airlock into outer-space without a spacesuit and every cell in their body doesn’t explode. Not only does he just hold his breath, he floats around, finds a piece of debris that conveniently becomes a spacesuit, then is rescued by his new found friends while he is hanging out without a communicator amidst tons of wreckage. I am a Doctor Who and Torchwood fan. As a result have a tendency to let a lot of stuff slide, like Captain Jack hanging on to the outside of the TARDIS as it hurtled through time and space, but what the Wachowski siblings have done is to mess up the premise that is at the center of the story. If you mind spoilers, this is where you should look away.

The characters all agree that Jupiter Jones is the DNA reincarnation of the mother of a royal merchant family. This family controls a huge percentage of a galaxy spanning economy. Her supposed family has a vested interest in her not claiming her throne. At the same time it is made clear that both her mother and father were 100 percent Earth humans. In fact her birth mother is alive and cleaning toilets in Chicago. So what gives? How is she supposed to be identical genetically to the matriarch of the family? That is never addressed and without there being some basis for her right to the throne what is the point to the movie?

If you can blind yourself to that plot hole and many, many others wide enough to drive aircraft carriers through, then you may enjoy the film for what it is, an action space opera rather than for what it is not; science fiction. One more caveat, the heavy handed slap at capitalism made me want to get sick.  Please guys, a capitalistic desire for profit does not make you into a fascist Nazi-esque creature ready to sacrifice millions of lives to gain a longer life. After all the studio just spent $175 million dollars on this clunker in the hopes of a huge return. Not gonna happen. Gee guys for that money they could really have launched a space probe or produced a really fun space fantasy like Guardians of the Galaxy.

My final score for this film is a C+. 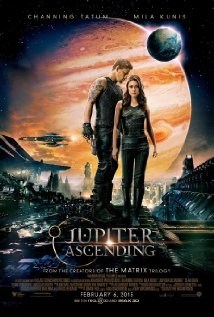 Article Name
Jupiter Ascending - Movie Review
Description
The vast majority of film critics are trashing Jupiter Ascending. I would like to say to critics and movie goers everywhere, Jupiter Ascending is better than the last 3 Star Wars movies. In a world where Revenge of the Sith gets an amazing 80% on the Rotten Tomatoes Tomatoemeter, perhaps Jupiter Ascending should not be totally eviscerated.
Author
June K. Williams
BuzzyMag.com