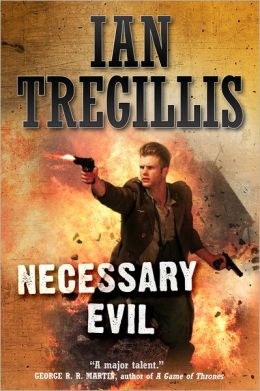 is the third book in Ian Tregillis’ excellent Milkweed series of books. Tregillis himself describes the trio of books as a triptych rather than a trilogy and I think that’s an important distinction; a triptych is a collection meant to be enjoyed as a whole rather than just a series of three consecutive stories. Necessary Evil

definitely works better when taken with the first two books Bitter Seeds and . It follows the continuing adventures of British spy Raybould Marsh. Marsh is the anti-James Bond. He doesn’t have slick moves or flash gadgets, just a quick mind and a talent for violence, violence that he regularly brings to bear over the course of the three books. As with the first two books, the British spy agency known as Milkweed is trying to deal with the Third Reich’s supermen. The fact that these supermen are all in fact terribly damaged children is beside the point, especially when the most damaged of them is a seer who can see and manipulate the future with 100% accuracy.

The one thing holding back the Third Reich is a tiny collection of British Warlocks who are able to call on the aid of super powerful, malevolent inter-dimensional entities called Eidolons. Calling upon these creatures is very much like calling on sharks to help you out with your barracuda problem or in this case summoning Cthulhu to help with your Nazi problem.


Something Tregillis does exceptionally well is to imbue all of his characters with a sense of depth. Only a very few characters come across as truly monstrous, and even then the reader is shown reasons for their descent into the darkness. Even the super powered evil children are shown as three dimensional characters with their own motivations and foibles. This makes for an exceptionally tense story as the story is more than just a case of stiff upper lip Brits vs those pesky Nazis.

Tregillis has also managed to get the Eidolons right, which is no mean feat. Having eldritch abominations appear in your story is a delicate balancing act and one that could easily have gone badly wrong. However because the Eidolons are kept as mysterious, threatening creatures rather than being explained away, Tregillis keeps the sense of dread that they bring to the story.

We never even actually see an Eidolon; we’re just treated to the effects of its presence. It’s a very effective trick and the story is much better for it. There is a particular sequence where Marsh is forced to spend some time in the presence of an Eidolon and begins to forget how reality works. It cements the sheer power of the beings without ruining their sense of mystery.

While I wouldn’t recommend getting into Necessary Evil without reading the first two books, if you did pick this one up first you wouldn’t be lost for long as the back story is worked in very smoothly over the first few chapters. I do feel like the ending was a little anti-climactic, especially after the events of book two, but even then Necessary Evil is a worthy end to an excellent series.

A conclusion to the parallel-world series that began with Bitter Seeds finds British spy Raybould Marsh traveling to an alternate-dimension Earth in the early days of World War II to save one of the planet's timelines from alien invaders who destroyed his own world, an effort that is challenged by a powerful Nazi super-human desperate to secure her own survival.