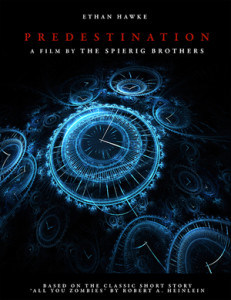 WHAT LIES DOWN UNDER.

Predestination is perhaps the first ever quintessentially Australian science fiction film. Or at least, how we Australians would like to define the term. Which means, precisely…? Two points. Firstly, that it is the creative product of Australians. But secondly, that what we see on screen in no way panders to notions (either insular or international) of Australian identity. Written and directed by Brisbane-based filmmakers Michael and Peter Spierig, Predestination fits the bill. Finally, a movie we can call our own without having to include a cultural translation app or the caveat ‘…for an Aussie production.’ Filmed in Australia, set in New York, with time travel paradoxes galore and no sign of Bruce Willis. This is the one.

The Spierig brothers made their international breakthrough in 2009 with Daybreakers, a slick, moody but still blockbuster-flecked SF-vampire film. Predestination is scaled down from this earlier production, stripping action and needless effects for the pure essence of science fiction. The plot follows that of Robert A. Heinlein’s ‘All You Zombies’ (1959), a short story in which the titular zombies are purely allegorical. Heinlein reputedly wrote this in a single day — which shows — and while the Brothers Spierig have stayed remarkably true to his text, they also have given it a more considered, more human treatment, and fleshed out the various complexities that Heinlein left only hinted at. Film adaptations of classic SF writing often upscale to the point of nonsense. In this case, however, the effect has been to take what was little more than an artist’s concept sketch and fully realise it on the canvas of the silver screen.

The time travel storyline is impossible to discuss without spoilers. Suffice to say, though, that it is intelligently constructed and (refreshingly) hasn’t been undermined for purposes of injecting action or setting up an unnatural twist ending. Whatever twist element there is has been woven into the script. Wherever mindless action has been omitted, its place has been taken by conversation and character development; both of which engross far more than the usual men in suits running about, waging a covert war against logic. In Looper (dir. Rian Johnson, 2012), Bruce Willis’ character glosses over the mechanics of time travel so that he can cut back to the natural order of gun battles and blowing things up. Predestination is similarly unbecoming regarding the hows, whys, and who’s-your-fathers of nipping about in time, but the intent is different. Here, the characters have more important things to talk (ergo, think) about; and while Spierig and Spierig don’t resolve every aspect of Heinlein’s scenario, nor do they allow rank inconsistencies to stand. The viewer is left with questions; but answerable questions, not gripes.

One aspect of Predestination’s non-insular Australian sensibility is its casting of both Australian and non-Australian actors. First billing goes to American Ethan Hawke — whose filmography evidences a greater discernment and fidelity to the craft than many other ‘name’ actors — and to up-and-coming Australian Sarah Snook, whose performance is such that no self-respecting time traveller would ever consider going back and casting somebody of higher profile for the role. In support, it is pleasing to see Noah Taylor, who here shows what he can do when not forced into the role of caricatured Aussie la his recent outing in Edge of Tomorrow (dir. Doug Liman, 2014). The small yet high-calibre cast reflects the Spierig Brothers’ efforts to make Predestination better rather than bigger. It also (we might hope) signifies a new ethos in those people who in the near future will be bringing Australian talent to bear on the filmmaking world at large. 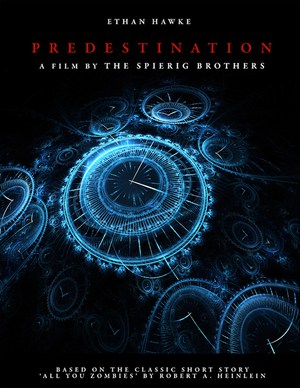 Article Name
Predestination - Australian Zombie Movie Review
Description
Predestination is perhaps the first ever quintessentially Australian science fiction film. Or at least, how we Australians would like to define the term. Which means, precisely…? Two points. Firstly, that it is the creative product of Australians. But secondly, that what we see on screen in no way panders to notions (either insular or international) of Australian identity.
Author
Jacob Edwards
BuzzyMag.com