O’Brien outlines the parallels between his real life as the head of Scorpion Computer Services, and the happenings on CBS’ new drama, Scorpion. 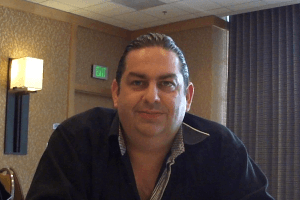 In CBS’s Monday night drama SCORPION, a man named Walter O’Brien, played by Elyes Gabel, a brilliant but socially maladroit computer whiz, assembles a team of fellow geniuses who work with the FBI to solve and prevent disasters. In the first episode, they work around a hacker’s attack on the air traffic control system, which is about to cause a plane to fall out of the sky.

There is a real Walter O’Brien, who heads up the actual company Scorpion Computer Services, which works with the U.S. government and private companies to detect and neutralize threats. According to IQ tests, O’Brien is also one of the five most intelligent people currently alive on Earth. He’s one of the executive producers of SCORPION and worked with fellow executive producers Alex Kurtzman, Roberto Orci and Nick Santora, who is also the show runner, in bringing the story to television.

In the premiere episode, SCORPION introduces us to Walter, then a twelve-year-old living in his native Ireland, where he draws the FBI’s attention because he hacks into NASA – so he can get the blueprints for the space shuttle to decorate his room. This, O’Brien relates, actually happened.

O’Brien is in attendance at a party that CBS throws for the Television Critics Association. He sits down to talk about SCORPION, and also something that he says he considers equally as or more important than IQ – “EQ,” which is understanding what is socially and emotionally appropriate in a situation and being able to act on it.

[easyazon_block add_to_cart=”default” align=”left” asin=”B00NSC08OK” cloaking=”yes” layout=”top” localization=”default” locale=”US” nofollow=”default” new_window=”default” tag=”buzmag-20″]The genesis of SCORPION as a TV series was “deliberate,” O’Brien relates. “My company recruits very smart people from around the world to solve problems and they’re getting harder to find. We’ve found most of the ones who are aware they’re geniuses, or who have tested themselves, but now we have to find the ones who don’t know they’re geniuses. They just know they don’t fit in. So we decided to do an awareness campaign to allow them to see themselves, identify themselves and to find us, that would be helpful.  So we got together with the folks over at Scooter Braun Productions [Braun is another executive producer on SCORPION], who we knew, and we said, ‘How do we do this?’ And we got with [the talent/writing representation agency] CAA, and they connected us with the writers and producers and directors at CBS, and everyone said, ‘This is a hell of a story, we’d better make it.’ And it all kind of rolled from there.

Although part of the reason for making SCORPION is as a recruitment tool, O’Brien says there’s no need to attach an overt notification to the series. “We don’t need that. First, at the beginning of the show, it says, ‘Based on a true story.’ The end of the show will have certain statements and credits referring directly to the real company and myself, and the folks who are curious will start looking it up. We’re pretty easy to find online.

The episodes of SCORPION have both a great deal of technical detail and a lot of Hollywood-style action. Has O’Brien had adventures this complex, if perhaps with fewer cars and guns? “Yes. A lot of what’s in the pilot is very true. Of course, little bits of it are Hollywood-ized, to make it a little more watchable, but a lot of what’s in the first several episodes is based on the writers sitting down with me, talking about what really goes on. Maybe we would change the city, maybe we would change what the characters did, but the stories are all based on reality.”

In the first episode, after observing young Ralph Dineen (played by Riley D. Smith), Walter informs Ralph’s overwhelmed single mother Paige (played by Katherine McPhee) that the boy is actually a genius who simply doesn’t know how to communicate with ordinary folks. Paige winds up helping Walter with some of the same issues Ralph has to tackle – understanding people’s emotional needs and expectations.

In real life, has O’Brien ever gone up to a parent and explained that a seemingly dysfunctional child is actually extremely bright but emotionally trapped? “Yes, several times. More often than not, the parents have been sent to me, to bring their kid to have dinner with me and sit with them because the kid’s flaking out, can’t handle school, getting in trouble, considered to have ADHD or autism, and they want me to sit down and talk to the kid, and it changes their life.”
[easyazon_block add_to_cart=”default” align=”left” asin=”B00MRH3JJ8″ cloaking=”yes” layout=”top” localization=”default” locale=”US” nofollow=”default” new_window=”default” tag=”buzmag-20″]
There’s a scene where Walter and Ralph play chess using pepper and salt shakers and various other restaurant table items as playing pieces. How do they wordlessly reach an understanding of which piece is which? O’Brien chuckles at the question. “Well, actually, in chess, every piece has a unique move. You wouldn’t know when you just start off, other than their positions. But when you see how they move, you immediately know which one’s a rook and which one’s a bishop and so on.”

Besides Walter, who’s expertise is in computers, various characters display their genius in very different arenas. Is O’Brien’s real team like this? “All the disciplines that they have in the show are all derivative of real people that I work with. There are several of those disciplines where the reason that I work with those people is, they’re far superior to me. Probably the best example would be Toby [played by Eddie Kaye Thomas], because he reads humans very well and can read what they’re thinking and where they’re coming from and everything else. That’s something I was very oblivious to and I’m constantly trying to learn.”

There’s a real-life version of Toby who helps O’Brien navigate the tricky paths of human nuance. “I do learn. It just makes me more aware of observing interaction with other people. But he’s still my go-to guy when I’m not sure.”

Being part of the workings of a television show is a new experience for O’Brien. He says he finds it intriguing. “Obviously, I grew up watching TV and watching movies, but when you get behind the scenes to see it – it’s not so much the set, it’s back with the writers. It’s seeing the formulas and the discussion and the thoughts, saying, ‘Let’s inject some emotion here, let’s make sure we use a different character here, let’s make sure we don’t lose the audience here, this is too short, this is too long.’ The thought that goes into that as an audience member, you take that stuff for granted, it just flows. But you realize how much thought’s gone into the writing. The set, obviously, it’s overwhelming. You turn up, you see a hundred and fifty people, trucks and everything else, you’re like, ‘Wow, we need to do all of this just to film a three-minute scene.’ But they do. And then you see all of it come together. Obviously, I’m an amateur, so I see them film the same thing twenty times. I go, ‘How can they possibly use this?’ And then I see them display it from seven different camera angles, and it makes it more powerful. ‘That’s why they did it twenty times.’”

True genius exists all over the world, O’Brien says. The problem is often finding the people who possess it. There are certain countries that appear to have more individuals with high IQs, but “I think that’s more socio-economic than actual biology. The reason for that is, some of the first-world countries have better schools that do more testing that have gifted children programs, so they recognize them. I’m sure many third-world countries have brilliant kids that nobody tests, particularly women. On average, there are more women prodigies than men, but there are more [male] ones found because they don’t test the girls in some countries. And so yes, we find them from Russia, India, the Czech Republic, China, the U.S., England, Germany, et cetera, but that doesn’t mean there aren’t any other countries, it’s just that the countries don’t have their school records on file digitally for us to look up.”

Living in circumstances quiet enough to allow concentration – i.e., not a war zone or a high-crime area – can also be important. “Home environment, whether you have two parents or not, a stable environment where you’ve got friends around you that are supportive and loving, of course, that has a massive effect on a kid, whether they’re a genius or not. In fact, if they are a genius, they might have half a chance that they could still do okay in school without being able to concentrate. It’s the ones in between that get caught – they’re average and they appear below average because of these other factors.”

Within the real Scorpion company, O’Brien notes, they have unique courses for potential employees. “We hire people, but we also have therapy programs, where we put them through immediate feedback, where we try to make them self-aware, mentor them and help them grow and correct themselves. About thirty percent of them fail that course and we have to let them go, because they’re smart, but they’re not smart enough to change themselves. Some people are so hard-wired in the way they think that you can’t break them out of their habits. But the ones that are willing to learn and change can grow with us. They’re not going to turn into the cheerleader or the quarterback in school, but we need them to be at least average. We need them to be able to play with the team, communicate effectively, speak up when they need to – basic things to make them functional. Below that, no matter how brilliant they are, we can’t use them.”

Is there anything else O’Brien would like to say about SCORPION right now? “I’d encourage people to absorb the show for what it is, try to get it to force them to think about and talk about EQ. It’s not really their IQ. They already have that. It’s the EQ that’s changeable. We don’t really talk about that and they don’t teach it in schools, they don’t teach it to kids, but what job are you in where your EQ doesn’t save your butt if you know how to play politics, how to talk to your boss, how to deliver a difficult message, how to manage people? It affects everything, but nobody talks about it. So if it starts that conversation, I think it’s healthy.”