A shared literary universe is when two or more authors contribute standalone works set within the same fictional world, or utilize shared characters or storylines. The scope may vary and it’s immaterial whether or not the same characters appear in all works. However, it is important for the various authors to play within the rules of the universe and emphasize whatever makes a given universe so special.

Over the past few decades the Marvel and DC universes’ rise in popularity in both comics and on the silver screen has heightened the presence of shared universes within the pop culture ethos. It turns out audiences enjoy continuity and have interest in seeing different artists’ “takes” on their favorite creations. Shared universes create larger, less finite stakes, which, when executed correctly, can strengthen audiences’ devotion to a project.

The readers aren’t the only ones who benefit. Since shared universes are most common in science fiction and fantasy, more than one author having the opportunity to “play” in these worlds often results in a fuller, richer world made more dynamic with each installment.

There are numerous shared universes in literature, all varying in scope. Here are five prime examples and how they differ.

H.P. Lovecraft initiated the Cthulhu Mythos with a series of short stories published between 1919 and 1936. Three months after publication of the final entry of this semi-connected series, Lovecraft passed away, leaving behind a mythology that various authors would revisit and expand upon over the next many decades.

This universe, although quite similar to our own, depicts humanity and its place in the world through a unique lens. Each story gives dominion to a pantheon of powerful alien beings, known as the Great Old Ones, who long ago created humankind as a slave race. Their existence was a given in the early stories, but 1928’s “The Call of Cthulhu” gave the beings real-world context.

Cthulhu is described as having an octopus head with numerous feelers, an enormous super-human body with prodigious claws and large, narrow wings. His distinct physical form is of particular interest to humankind, unlike more powerful beings such as Yog-Sothoth who is the embodiment of space-time and lives outside our reality. Cultists believe he resides on Earth, imprisoned in the lost city of R’yleh deep below the water where not even thoughts can escape—or perhaps he is merely sleeping?

These novel concepts enticed other authors to enlarge the universe after Lovecraft’s death. August Derleth—who’d communicated with Lovecraft via letters since his teenage years—was the first to take up the mantle and even coined the term “Cthulhu Mythos.” He continued the established journeys of secret cults yearning for a time of ecstasy and chaos following Cthulhu’s return, and fleshed out the Necronomicon, humanity’s guide to the Old Ones.

Some Lovecraft purists abhor how Derleth allegedly added aspects of Christianity into the mythos, viewing Lovecraft’s universe as an immoral place, devoid of religion. Others, based on Lovecraft’s reaction to his contemporaries writing tales surrounding the Necronomicon while he was alive, believe he would’ve encouraged the expansion of his lore, likening it to opposing depictions of the Olympians or the myriad of sects within modern Christianity.

His true feeling notwithstanding, the mythos lives on, whether through John Glasby’s drastically alternative description of Cthulhu, Alan Moore’s hyper-sexualized prequel existing in a world where Lovecraft’s writings were considered prophecy, or through characters featured in tabletop gaming. 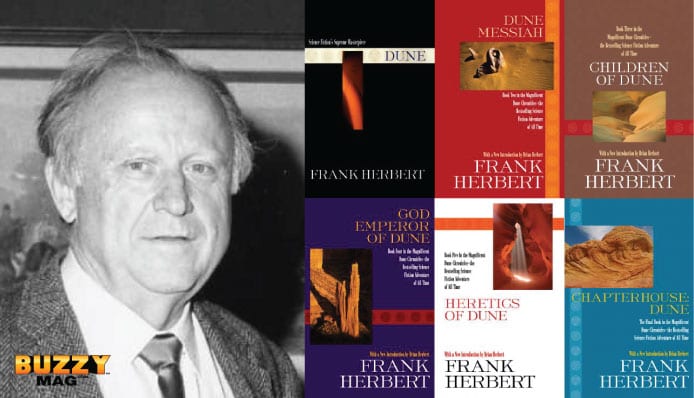 The Duniverse was created by visionary Frank Herbert; its original chronology spanned six hefty novels released between 1965 and 1985. Not only did Herbert’s works change how the literary world classified science fiction—notably by reimagining the genre’s standard length—it also provided an unparalleled futuristic vision that drew consumers and creators alike to this innovative universe.

Set in the distant future, the world of Dune has abolished artificial intelligence and other future tech in favor of adaptable alterations to the human mind. For benefits such as a longer lifespan, enhanced vitality, and heightened awareness, civilization has become reliant on the spice called melange. Certain partakers of “the spice” may develop a precognition power known as prescience which enabled the creation of safe and accurate interstellar travel.

The spice also has its share of perils. It’s a highly addictive substance and withdrawal is often fatal. Those who decide that the benefits far outweigh the risks must contend with it only existing on the desert planet, Arrakis, home to a race of giant, man-eating sandworms. Also, only the richest family houses have opportunity to be stewards of Arrakis, thus controlling the spice absolutely. A political, religious, and empirical struggle between the Atreides family and other factions wishing to control the spice is what jumpstarts the events of the first novel. Herbert continues that story and documents future generations throughout five follow-ups.

In 1999, 13 years after Herbert’s death, his son Brian and sci-fi author Kevin J. Anderson began further expanding the Duniverse. To date, they’ve released 14 novels, some of which are prequels delving further into the great houses; some take place in the interim of the original six stories, and others are direct sequels. While all these second-life Dune tales are original works, many stem from notes utilized by Brian following his father’s death. So even though these follow-ups differ stylistically, the essence of Herbert shines through. 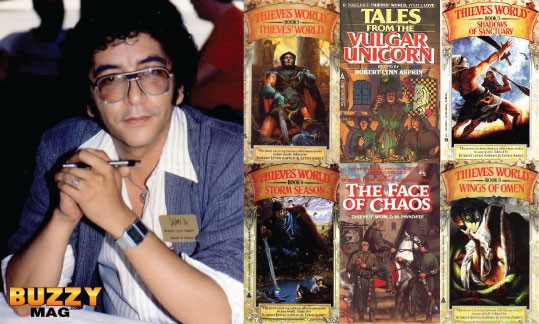 The city of Sanctuary is the primary setting for the Thieves’ World universe. Founded by pirates and runaway slaves, this dark urban fantasy stronghold is home to a sampling of the lowliest and most heinous criminals imaginable. Whether under rule of a conquering power or a true free city, Sanctuary is a cesspit akin to Sodom and/or Gomorrah where rogues are praised and the few “honest” citizens must adapt to the madness. In this world the anti-hero runs supreme.

Created by Robert Lynn Asprin, this series saw publication in 12 multi-authored short story anthologies, five official novels, and various graphic novels and RPG adaptations between 1978 and 1989. Between 1989 and 2002, many of the original authors—particularly wife and husband duo Janet and Chris Morris—expanded on the universe with unofficial novels and short stories.

In 2002, original editor and Asprin’s ex-wife, Abbey Lynn, revived Thieves’ World with the epic novel Sanctuary, followed by two new anthologies penned by some of the original authors alongside fresh voices. The revival focused on a slew of new characters, with most of the established characters either absent or only referred to in passing.

The Morrises were the most prolific writers of the series and were responsible for creating the fictional cavalry unit, the Sacred Band of Stepsons, a sexual-fluent band of warriors. Introduced in the Thieves’ World mythos, the Stepsons spun off into their own series of novels taking place in a wide variety of fictional locales based on historical settings. This rather popular spinoff continued after the original series again went on hiatus in 2004, with its most recent volume seeing publication in 2012.

This Larry Niven creation is as expansive as the universe itself—not really, not even close, but the overall span is quite impressive. Beginning in our present—Niven’s future at the time—the universe consisted of  the Milky Way and its nearest neighbors, where humankind and nearby alien races explored space using slower-than-light travel. Advancements in medicine and technology led to a golden era of peace and prosperity—aided by an unseen protector—until a tiger-like species known as the Kzinti invaded, beginning a 100+ year war.

The postwar and prewar stories were initially not connected; however, Niven eventually connected the two timelines in a story explaining how humankind broadened their universal presence by coming across faster-than-light travel. By series’ end, known space had expanded to an irregularly-shaped bubble, about 60 light-years across.

After much intergalactic exploration, the Ringworld era began under an oppressive united space government. This era saw the rise of the Teela Brown gene, a psionic power capable of greatly manipulating probability, which in time led humankind into a pervasive, yet dull, period of peace.

This saga was not published in linear order. Instead, Niven sporadically released stories from various eras between 1966 and 2012. His keen eye to detail created a comprehensive story map, with one glaring omission. Feeling inadequate over writing “war stories,” Niven never wrote much on the Man-Kzin wars, leaving the often referred-to conflict to the reader’s imagination.

That all changed in the late 1980s when Niven opened that particular period into a shared universe. After years of fan requests, he invited other authors to fill in the gaps, in hopes of a thorough and satisfying telling of the epic conflict. Between 1988 and 2014 the Kzinti race appeared in various novels and short stories edited by Niven. The cat-like race even made appearances in the Star Trek universe, stretching their reach ever further.

This shared universe started a bit differently in that it was first imagined as an audiobook. Audible.com tasked sci-fi virtuoso John Scalzi to mastermind a compellation designed for the aural senses. Contributing a story and acting as editor, Scalzi brought together four of his contemporaries: Jay Lake, Tobias Buckell, Elizabeth Bear and Karl Schroeder. The result was five longish short stories about cities in the future. Three Battlestar Galactica actors and two prolific audiobook voice artists narrated this project, released in 2008. The print version wasn’t released until the following year.

The world of Metatropolis takes place at an indeterminate point in the future. Many of the planet’s natural resources have been squandered and the effects of climate change have taken a sizeable toll. While the stories take place in various locations across the United States and Europe, the major city layouts are basically the same: corporate, semi-self-sufficient life within the city walls surrounded by the “wild” outskirts occupied by lower-income civilians and various fringe groups.

Despite the fall of governments from the time before, corporations and industrialists still held favor with the new rule. However, most of the large “protected” cities saw the need for green alternatives and strived to do things better than their predecessors. Each city found varying levels of success. Automobiles and other pollution-making technology remained out of convenience, but fewer people used them because of skyrocketing petrol and transportation prices too rich for mid-to-low-income individuals.

The true environmental innovations existed in the fringe and varied by location and execution. Whether the method was complete self-sufficiency, communal sharing, or virtual reality escapism, the solution for longevity in this universe comes from the outside and moves its way in. Instead of starting a revolution at the source, these environmental activists came to the revelation of locally sourcing their progressive efforts.

Gregory is a freelance/fiction writer, voice over artist, blogger, writing instructor, and foppish socialite currently residing in the greater Buffalo, NY region. For years, he was a performer and head writer for the improv group The Human Touch. Check out his work on MapQuest Travel, Cracked.com, and his writing technique YouTube channel The Writers’ Lounge. You can also follow him on Twitter , Tumblr , and his website GregoryAustinVoiceActor.com.

Gregory is a freelance/fiction writer, voice over artist, blogger, writing instructor, and foppish socialite currently residing in the greater Buffalo, NY region. For years, he was a performer and head writer for the improv group The Human Touch. Check out his work on MapQuest Travel, Cracked.com, and his writing technique YouTube channel The Writers’ Lounge. You can also follow him on Twitter , Tumblr , and his website GregoryAustinVoiceActor.com.
Summary