STAR TREK: PICARD, now streaming its entire first season on CBS All-Access, picks up twenty years after the end of the film STAR TREK: NEMESIS. Patrick Stewart is back as former Starfleet Admiral Jean-Luc Picard who, at the start of the series, is extremely disillusioned with the organization he flew and fought for over the years. The Federation failed to save the vast majority of Romulans when their planet exploded, and banned all artificial life forms – like Picard’s late android friend Data (Brent Spiner) – after an inexplicable massacre by rogue synthetics. 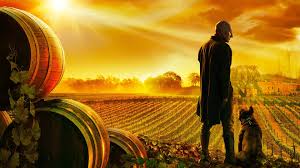 Picard has retired to his family’s winery in France. However, when he discovers that Data has created twins (both played by Isa Briones), and that the surviving one is in danger, Picard determines to go into space again to save the young android.

For this unsanctioned mission, Picard requires a crew. Dr. Agnes Jurati (Alison Pill), Earth’s foremost expert on synthetic life forms, is eager to accompany him. Everyone else requires some convincing.

Michelle Hurd plays Raffi Musiker, who earlier had been Picard’s Number One during his rescue missions. In a meta in-joke, Picard finds Raffi living in Vasquez Rocks, California, which has served as the location for innumerable films and television shows over the years, including STAR TREK: THE ORIGINAL SERIES. Native New Yorker Hurd has had regular or recurring roles on a multitude of shows, including the reboot of HAWAII FIVE-0, BLINDSPOT, LETHAL WEAPON, ASH VS EVIL DEAD, and DAREDEVIL. She will soon be seen in Justin Simien’s new film BAD HAIR. 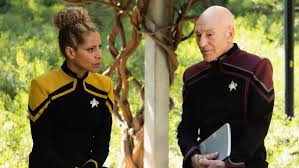 Santiago Cabrera plays former Federation pilot Cristobal Rios and his lookalike but much more upbeat and differently-accented hospitality hologram. Cabrera, born in Venezuela, was raised in multiple countries, including England, Romania, Canada, and Spain. Cabrera spent three seasons as Aramis in THE MUSKETEERS. Other credits include BIG LITTLE LIES, SALVATION, HEROES, and Lancelot in MERLIN. 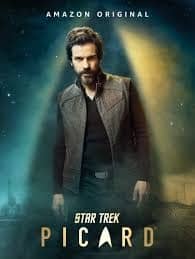 Australian actor Evan Evagora, who was on the big screen earlier this year in FANTASY ISLAND, plays the Romulan Elnor, raised and trained by a community of female Romulan warrior monks. Picard befriended Elnor when the latter was a child, and though the grown Elnor still has abandonment issues, he sees the quest as worthy (i.e., hopeless). 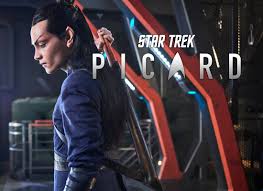 Cabrera, Evagora, and Hurd all participate in a STAR TREK: PICARD Q&A session held by CBS All-Access for the Winter 2020 Television Critics Association (TCA) press tour. When the panel is over, the trio make time for further discussion. This interview combines their comments on the panel with the later private conversation.

Asked if they remember their first exposure to STAR TREK, Hurd is the first to speak. “When I first got the job [playing Raffi], I had this flashback to my childhood, watching [the original] STAR TREK with my family. I’m biracial. My father, Hugh Hurd, is a black actor. He was a theater actor, as well as part of John Cassavetes’s acting troupe, and so SHADOWS and WOMAN UNDER THE INFLUENCE, and all those John Cassavetes films he did. He’s passed. So unfortunately, he didn’t get to see this. But it was one of those things that was really important for him, that his three daughters could see themselves represented on television.

“It’s imperative for children to see themselves represented, so that they can see that their voices are heard. And when I got this job, I had this flashback, like, ‘Oh, my goodness.’ I don’t think I realized how impactful STAR TREK was to me as a child. The very first interracial kiss on television was on the show [between Uhura and Kirk]. That was my parents. Do you know what I mean? I didn’t see that anywhere else. And I think there was a question about why this resonates for so long. I think that’s one of the most clear things, is that this is all about humanity. We are telling our stories, the stories of people whose voices may not be heard, other-isms and people who have been included or excluded. And so that was my connection to STAR TREK, realizing that not only has it impacted me as a child, but that we are going to give a mirror to other people who look different. They are going to see themselves represented. They are not going to feel that they are not seen or heard. And it’s a beautiful honor and a privilege to carry that burden, and I do it happily. My sisters are theater actors, and they’re just cheering me on.”

Cabrera says his experience was, “I moved around a lot as a kid. So I feel like I missed it. I remember it always being on TV. Whether you like it or not, it’s there. It’s present. But now that I got into it, and watched so many episodes, the first thing I did was ring my folks and go, ‘Why didn’t we ever watch this at home?’ It’s fantastic, and I immediately understood why it has that cultural impact, and the phenomenon of it. And what I’ve loved in meeting the fans in the few Comic-Cons we’ve done as I’m slowly trying to experience everything is, I just think that people who are STAR TREK fans and science-fiction fans, there’s an innate curiosity. And people are trying to look at the world, or understand something, or tick in a different way. There’s something really interesting there. It allows you to not only tell stories and reflect the world today, but also just spark that intellect and that extra curiosity.”

After spending three years in the costume of a fifteenth-century French musketeer, Cabrera finds his STAR TREK: PICARD costume relatively normal-looking. :I realize I’ve done a lot of varied things. I’ve been in historical pieces, or fantastical things, but I realize I’ve never been in the future, and that was a super-exciting thing. But here, we’re actually dressed in very much everyday stuff. We’re dressed in some cool stuff that you could wear today, and you wouldn’t really stand out,” he laughs.

“Not so much me,” Evagora says. “My garb belongs to my religion, so I’m wearing a religious outfit. It’s quite different to what everyone else is wearing.”

Playing the Romulan Elnor, Evagora says it doesn’t require “too much makeup. I’m wearing some prosthetics, and my eyebrows have shifted.”

Cabrera says that he and Hurd don’t have to deal with prosthetics at all. “We are human. I’m a resident alien in this country [the U.S.] – I love saying that, because it’s actually a really interesting title. But yeah, we are human.”

Because this interview takes place before any of STAR TREK: PICARD was available to the public, there are limits on what the actors can reveal about their characters. Hurd relates, “I think you’ll see that Picard has to go on a journey to gather up some people to help him do what he needs to do, and we become a little bit of a motley crew.”

“Outside of the Enterprise,” Evagora adds.

Did the actors have to learn anything in order to play their roles? “I had to learn Romulan,” Evagora acknowledges with a laugh.

“Yes, you did, and you do it fabulously,” Hurd observes.

Evagora appreciates the comment. “I do a pretty good job, if I say so myself. I was given my dialogue, and then I had a coach give me the audio playback, so that’s what I had to learn, this whole new language where there are different structures, and different meanings. I’m saying some pretty cool stuff in it, though, so I was pretty happy with that. I am a STAR TREK fan. So I did know a lot about Romulans and Romulan culture, but I found, once I had received the script and been given more of a breakdown, my character wasn’t raised like a typical Romulan. So you will see some differences between me and other Romulans that we encounter in the show.”

Of her own role, Hurd says, “Raffi is really well-written, and she’s really complex, she’s really thick and vetted out. So for me, my job was to really approach her as an artist, as an actor, and just dive in deep, and be as authentic and truthful as I possibly could.”

Was Patrick Stewart what any of them expected? “Beyond,” Hurd enthuses. “He was that and more. Everything you could wish for. So wonderful. So generous, kind, confident, brave.”

Are they ready for STAR TREK to become part of the rest of their lives?

Are there people in the actors’ lives who are excited that they are now part of the STAR TREK universe? “Oh, my God,” Hurd replies. “They’re coming out through the woodwork. People that you wouldn’t expect are like, ‘By the way, I’m a total Trekkie! I’ve got an outfit!’ So yeah, absolutely.”

Evagora says, “My mom is a big sci-fi fan and a really big TREK fan. So this was kind of like a dream come true for her. I think she’s going to be doing the two things she loves – watching STAR TREK, and seeing her son.”

Evagora gets to use his normal Australian speaking voice as Elnor. He’s very thankful for the goodwill and physical aid for his country in the wake of the devastating fires that swept the land earlier this year. “It’s quite horrible, but everyone there is banding together, and there’s been a lot of community and national support, as well as international support. It’s been good to see.”

And what would each of them most like people to know about STAR TREK: PICARD?

Hurd says, “We’ve really been respectful of the fans, I think they’re going to love this show, and it’s a great story.”

Evagora elaborates. “I think they’re going to love the characters. Each individual character is so unique, and at the same time, it’s what brings us all together, and I think that speaks to STAR TREK – this band of people who didn’t really fit in anywhere, and now look at where we are.”

Cabrera concludes, “It’s fresh, but faithful to the universe, to the STAR TREK world, to what STAR TREK means to people.”