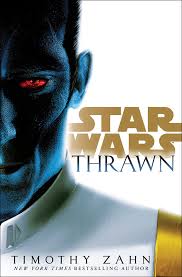 Grand Admiral Thrawn’s origins and the story of his rise in the Imperial ranks have remained mysterious. Timothy Zahn chronicles the fateful events that launched the blue-skinned, red-eyed master of military strategy and lethal warfare into the highest realms of power—and infamy.

THE RED EYES HAVE IT.

The Big Bang that led to the Star Wars expanded universe was the publication in 1991 of Heir to the Empire, the first book in a post-  Return of the Jedi trilogy by respected SF author Timothy Zahn. Dark Force Rising followed in 1992, then The Last Command (1993). Star Wars fans rejoiced.

External factors aside, the new trilogy derived its success from three considerations: Zahn’s mastery of military SF; his obvious love of Star Wars; and his introduction of several new characters, one of whom would become every bit as beloved as those from the films.

The character in question was Grand Admiral Thrawn: a blue-skinned, red-eyed Chiss warrior and incomparable military strategist whose mental powers (not the Force, just insight and calculation) shaped him as the perfect adversary for Leia and Co. to battle against in what could be considered Star Wars episodes VII-IX. The Heir to the Empire trilogy soon took on a new name; unofficially: the Thrawn trilogy.

Grand Admiral Thrawn, like the rest of the Star Wars expanded universe, was in 2014 declared non-canonical by Disney and rebranded a Star Wars ‘Legend’. Such is Thrawn’s appeal, however, that he has now been reinstated by way of a novel-length origin story; that is to say, his origins having reached the Empire. Thrawn traces its titular character’s meteoric rise pre- A New Hope

, his preternatural genius once again on display as he conquers each rung of the Imperial ladder. It is in many respects a brave undertaking by Zahn — revisiting a protagonist whose exploits on a smaller scale could diminish him — but readers need not fear: Thrawn’s virtuosity is kept intact, his allure undiminished. 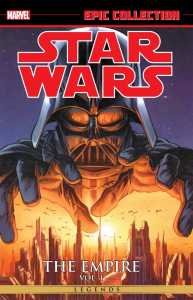 The series focusing on the years that follow “Episode III: Revenge of the Sith”! After the end of the Clone Wars, the Republic has fallen and Palatine exerts his ruthless grip on his new Galactic Empire.

Thrawn, of course, wasn’t previously a protagonist at all; he was the antagonist of Zahn’s stories. (Sympathetically portrayed, yes, and impossible not to respect, yet nevertheless the enemy.) This disparity is a tightrope that Zahn walks with quite some skill, pitting Thrawn against (a) space pirates; (b) the Empire’s xenophobic prejudices; but also (c) insurgent elements that we have to take as forebears to the Rebellion. Whereas a lesser writer might have compromised Thrawn’s integrity — or the reader’s — Zahn maintains both, and instead takes the black and white of the Republic-Empire-Rebellion dynamic into a more complex grey area.

His method for accomplishing this involves (once again) the introduction of new characters. Thrawn will remain the big lure for readers — his perceptiveness in the recounting giving him something of a Sherlockian appeal — but there are three others of note: Ensign Eli Vantro, whose off-world perspective shapes our impressions of Thrawn; the wily Nightswan, whose appearances are fleeting but who encapsulates the unstable galactic zeitgeist of oppression and resistance; and Arihnda Pryce (first billed of those heading the sub-plots), who has vowed to reclaim her world from the Empire but who, to do so, must allow herself to be subsumed into and subverted by the callous political machinery of Coruscant. Zahn gives us just the right mix of each.

Thrawn is character-driven SF adventure with an underlying depth; in other words, Star Wars at its best (albeit sans the major players from the films). One could argue against the need for the short, Thrawn-penned ‘Art of War’ excerpts at the start of each chapter. These don’t seem necessary, or even particularly germane; yet they too ultimately serve their function. As the end credits roll and the space debris settles into orbit, Zahn, like Thrawn, has foreseen all.

In this definitive novel, readers will follow Thrawn's rise to power-uncovering the events that created one of the most iconic villains in Star Wars history. One of the most cunning and ruthless warriors in the history of the Galactic Empire, Grand Admiral Thrawn is also one of the most captivating characters in the Star Wars universe, from his introduction in bestselling author Timothy Zahn's classic Heir to the Empire, through his continuing adventures in Dark Force Rising, The Last Command, and beyond. But Thrawn's origins and the story of his rise in the Imperial ranks have remained mysterious. Now, in Star Wars: Thrawn, Timothy Zahn chronicles the fateful events that launched the blue-skinned, red-eyed master of military strategy and lethal warfare into the highest realms of power-and infamy. After Thrawn is rescued from exile by Imperial soldiers, his deadly ingenuity and keen tactical abilities swiftly capture the attention of Emperor Palpatine. And just as quickly, Thrawn proves to be as indispensable to the Empire as he is ambitious; as devoted as its most loyal servant, Anakin Skywalker; and a brilliant warrior never to be underestimated. On missions to rout smugglers, snare spies, and defeat pirates, he triumphs time and again-even as his renegade methods infuriate superiors while inspiring ever greater admiration from the Empire. As one promotion follows another in his rapid ascension to greater power, he schools his trusted aide, ensign Eli Vanto, in the arts of combat, leadership, and the secrets of claiming victory. But even though Thrawn dominates the battlefield, he has much to learn in the arena of politics where ruthless administrator Arihnda Pryce holds the power to be a potent ally or a brutal enemy. All these lessons will be put to the ultimate test when Thrawn rises to admiral-and must pit all the knowledge, instincts, and battle forces at his command against an insurgent uprising that threatens not only innocent lives but also the Empire's grip on the galaxy-and his own carefully laid plans for future ascendency.