The Other Side of East – It’s a Run Around

I was all set—and busy gathering the notes—to write a column about Studio Ghibli. After all, I had already talked about a couple of series that were mysteriously resurrected from the past, so that subject was covered. And so far, I’ve said nothing at all about Studio Ghibli, which is, in a sense, the heart of animé. If I’m even going to pretend to tell you about animé, then Studio Ghibli needs to be discussed here. And it will be. I will write that column. Honestly, I will. But not quite yet.

I wish I had an excuse, but I just got distracted. One of my all time favorite shows just reappeared, and I’m so excited I have to tell everybody. (And not for the first time. Back in October, 2013, I was so excited that I wrote to SF Signal, “I have discovered what may be the best sit-com ever!” I went on for ten paragraphs.) The animé series in question was The Eccentric Family; it was based on a book by Tomihiko Morimi, and ran from July 7 to September 29 in 2013. It told a complete story from beginning to end, so even though four years isn’t all that outrageously long, it caught me entirely by surprise when they came out with a second season this spring. 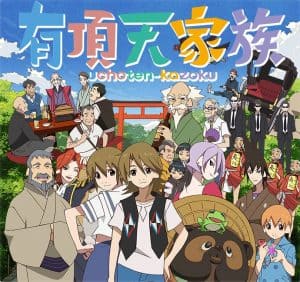 I called it a sit-com then, and I stand by that. I admit there’s magic—the entire concept is magic. It’s set in the three-tied city of Kyoto. Humans own and inhabit the city—their prosaic, real-world, business-oriented city—but all around them Tanuki (shape-shifting raccoon dogs) roam the earth, often posing as humans for mischief or profit. Above them, the sky belongs to the Tengu. (Originally a Japanese bird demon, but here a sort of flying wizard.) Occasionally a Tengu takes a human apprentice, who learns a lot of things, including how to fly. So there is plenty of magic, even if the humans are, for the most part oblivious. But the story isn’t about magic. It’s about personal relationships—the bonds and rivalries between brothers and cousins and fathers, and the mystery of making these absurd connections work.

There is endless comedy in the adventures of Yasaburou, the Tanuki protagonist, who is an unusually talented shape-shifter and will do almost anything for a laugh. He loves to take on the form of a teenaged boy and roam the city, but he’s just as happy to take on the form of teenage girl and go shopping with his pretty mom.

But all is not sweetness and light. There is an ever present awareness that, to the humans, the Tanuki are just animals, and food animals at that.


I’ve spoken so often about the beauty of the drawing in various animé, I worry you’ll get bored with hearing it. In The Eccentric Family, it’s not just that the drawing is good, it’s that it’s so elaborate. If the show has a fault it’s that there is so much imagery and detail crammed into every frame, that you will find yourself hitting the ‘pause’ button every few seconds to give yourself time read all the signs, and see all those little bits that go by so fast.

This is not usual. Every piece of the picture that operates independently requires a separate film strip to be laminated into the master. Consider the well known American animé, Futurama. It opens with the Planet Express ship zipping through New New York. Spaceships fly overhead. Pedestrians dive through transport tubes. Billboards display cartoons and alien languages. If you were a fan, and you watched the show every week, you may have managed to catch all the details of that 17-second intro by the end of the season. That level of complexity isn’t easy. Episodes took a year to produce. The first episode alone ran 30,000 frames. And The Eccentric Family does the same thing, every episode. Please, do yourselves a favor and check this out.

While I’m on the subject of series that made it back after a hiatus, I’d like to put in a word for another favorite of mine: Hell Girl. But I have to give you fair warning. This one, I can only recommend if you have a taste for the dark and creepy. 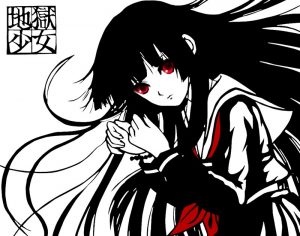 Hell Girl (Jigoku Shojo) ran from October, 2005 until April, 2006 and was successful enough to generate a second season, Hell Girl: Two Mirrors, premiering in October, 2006. There was a brief hiatus, but Hell Girl: Three Vessels returned in October, 2008. And that appeared to be it. It wasn’t until July, 2017 that Hell Girl: Fourth Twilight (also called Hell Girl: Reminiscent) was launched. I’m told there was also a live action series, but so far I haven’t been able to find it. Over the years, a few characters have been added to Hell Girl’s team, and in the fourth season, there are some surprising changes in tone, but the show remains unique.

Its premise is simple. There is a certain special website—an urban legend, some say. You have to access the entry screen exactly at midnight. When you do, you are asked to name the person you have a grudge against.

Of course, it’s not quite that easy. You don’t just enter a name and walk away. Rather, you’ve solicited an interview, and Ai Emna will appear to you. (Emna, by the way, is the name of the lord of Buddhist hell.) Ai is a beautiful little girl, perhaps nine years old, solemn and large-eyed and dressed in a sailor-style school uniform. She gives you a little straw doll (black, with a red string tied around it) and a warning. If you pull the string, you are entering a contract. Ai will carry the object of your curse to hell. But when the time comes for you to die, you, too, will go straight to hell. Then Ai disappears, leaving you to reflect on just how badly you want to curse your enemy. Sooner or later, most clients pull the string.

The individual tales are bleak and sorrowful. There are so many ways that humans hurt each other. Some of the grudges are just, and some are not. Even the worst offenses are not usually shown graphically, although the imagery inflicted on the victims as Ai Emna plucks them up are frightening. The story always ends with Ai Emna ferrying her little boat across the dark, quiet lake toward the gates of hell.

I love sharing these older shows with you, but pretty soon, we’re going to have to investigate new shows. The animé landscape has expanded and mutated. Up until recently, an animé show was very much comparable to a live action TV show. It was designed to plug in to a half hour (or, occasionally, a full hour) time slot, and so ran about twenty two minutes, leaving eight minutes for commercials inserted by the networks. But, as I’m sure you’ve noticed, live action TV has also changed a lot. It’s no longer entirely—or even mostly—network driven. The cable companies have become the primary producers, and even they are feeling the pressure, as consumers turn more and more to streaming their entertainment.

So far, these changes have not hugely affected the format. Cable companies and streaming services alike remain aware that they will soon be re-marketing their shows as 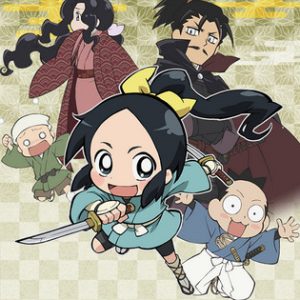 residuals, and the reruns will need to fit—at least approximately—into the same time slots that original network TV uses. But that may change. Certainly, Japan is now launching a variety of new shows that emulate, not the TV show, but the music video. They are designed to be played on mobile devices (the animation is usually crude) and aimed at a young audience (well, duh). They run anywhere from three to eight minutes.

I may be a little too old and slow for the three minute mini-drama. I frequently find the humor too heavy-handed and the fight scenes too unmotivated. Characterization is usually limited to oafishness competitions. But there is one I love. It’s called Ninja Girl and Samurai Master. Based on a manga, the animé was released on October, 2016, having been marketed as educational. It tells of Chidori, a pretty young ninja girl who is devoted to Oda no Nobunaga, an important warlord in the Sengokyu era. (That’s the 16th century, a period characterized by endless bloody wars as the various generals struggled to unify the country.) And while Chidori is fictional, Nobunaga most certainly was not. The story is told in quick time, and played for laughs, but the history it outlines is essentially accurate. It’s hilarious, and told in three minute doses, which is apparently all the history some people can tolerate in a sitting.

So maybe I’m being unfair when I look down my nose at the new crop of mini- animé. I’ll just have to watch more of them to be sure! 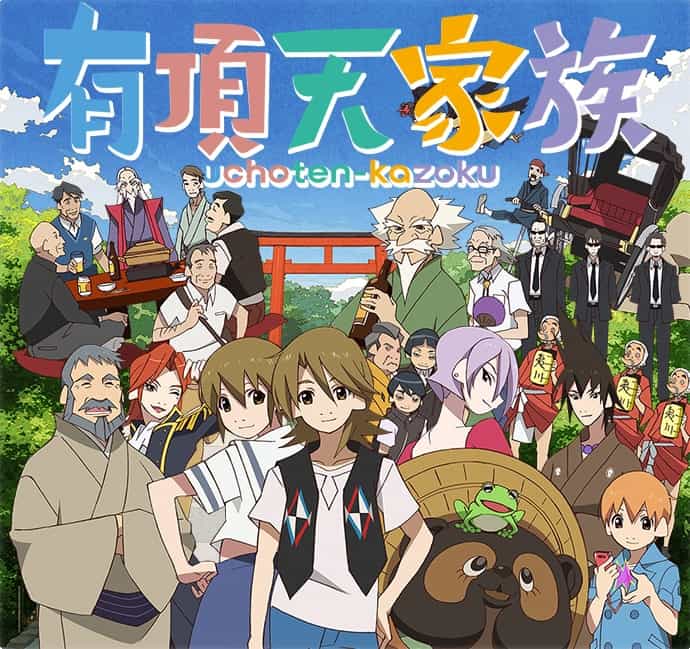 Article Name
The Other Side of East – It’s a Run Around
Description
The animé series in question was The Eccentric Family; it was based on a book by Tomihiko Morimi, and ran from July 7 to September 29 in 2013. It told a complete story from beginning to end, so even though four years isn’t all that outrageously long, it caught me entirely by surprise when they came out with a second season this spring.
Author
Michaele Jordan
BuzzyMag.com