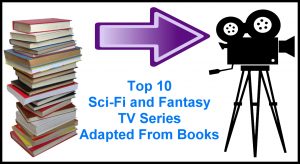 The 1930s through ‘50s were the golden age of science fiction and fantasy for pulp literature, radio and movies. Today we have arrived at another golden age for those two genres but for television. However, what makes this golden age so different is not just the medium, whether traditional broadcast TV or online streaming, but also the trend of adaptation of novels to small screen programming.

Until recently, television programming based on sci fi/fantasy books had been rare and so the below list of top TV series in the genre also includes shows not yet released. While the past and current shows can easily be talked about with accuracy, the future ones—because they haven’t aired yet—can only be, uh, speculated. But the speculations are based on the popularity and quality of the books the shows are to be adapted from and, in some cases, the producers. Also the timing plays a major factor in determining inclusion on the list.

So what about organization? Well, all of these series are either really great or show promise of being so. So it was easier to order them by chronology and influence of current events than rank of quality. However, I could only organize the first six of them by chronology since the remaining four are still in development (or in the talks). Even planned premiere dates for television shows change. Another factor is quality and popularity of the books these series are based on. So all of the shows listed below are adapted from best-selling or award-winning novels.

1. The Six-Million Dollar Man
Adapted From: Cyborg, by Martin Caidin

This started as three pilot movie episodes in 1973, then turned into a full series the following year and ran to 1978. Yes, sci fi book-to-TV adaptations were around back then but were very rare. But this made the Top 10 not only because of its popularity for its time, but also because the novel it was based on was a best-seller that led to a whole series of books with the starring character, Steve Austin. So in the history of sci fi book-to-TV adaptations, Six-Billion Dollar Man was one of the first. The plot is astronaut Steve Austin becomes critically wounded in an accident but the U.S. military saves him by integrating robotic parts with his body making him the strongest and fastest man on earth. He serves his country by going after both domestic and international criminals.

2. Game of Thrones
Adapted From: A Song of Ice and Fire series of novels, by George R. R. Martin

This is probably the longest running book-to-TV series to date. Having premiered in 2011, Game of Thrones is going into its seventh season. It has everything a high fantasy epic can ask for: a battle for an empire, dragons, legions of armored soldiers, sorcery and romance. Even though the books and TV show take place in a medieval-like world, today’s climate change issue is reflected in and worked well into the story line. One of the great things about Thrones is its big screen special effects for the small screen. That’s definitely a big budget series!

3. The Expanse
Adapted From: The Expanse series of novels, by James S. A. Corey

This space opera debuted in 2015 and will go into its third season in 2018. You can say it’s a bleaker, grittier version of Star Trek but with its own story line, of course. The stories are great, there’s plenty of action and suspense as well as thought-provoking political and scientific situations. The plot: in the 23rd Century, a detective goes in search of a missing girl which leads to interplanetary war and conspiracy.

Although it is said this series is “loosely based on the novel”, it does a good job of keeping the basic plot. It takes place in an alternative 1960s after the Axis Power nations of Germany and Japan have won the second world war. Like many of Philip K. Dick’s stories, such as Do Androids Dream of Electric Sheep? (which the movie Blade Runner was based on), conspiracy behind commonly perceived reality is involved, which a group of rebels attempts to reveal. Interaction between the well-developed characters is made to easily sympathize with them. Even the brutal, antagonists of the Axis Powers, who we love to hate, show some good qualities.

Gaiman is one of today’s most popular writers in speculative fiction and has gained a massive following that spans prose fiction. He is famous for his graphic novels, namely The Sandman series, and his books have been adapted for the big screen. So it’s not surprising that Starz’s dark fantasy TV series, American Gods, is one of the top programs in the genre today. It has done so well that within only two weeks of its premiere, April 30 of this year, it was renewed for a second season!

Consisting of elements of both high fantasy and horror, American Gods involves an ex con who goes on a cross-country journey and meets the gods of mythology along the way. He soon discovers that he is part of the war between the ancient deities and deities of today which are born out of the western world’s consumer culture. There is plenty of surrealism, suspense and graphic violence in this series.

This may be the top-most show on the list yet. Collectively, as of the writing of this article, the critics at Rotten Tomatoes give this Hulu series a 100% rating! Part of its popularity is also due to the book’s rise to the best-seller list after the 2016 elections.   Much of this has to do with the story’s near future patriarchal setting where women’s rights have been taken away by a conservative Christian agenda showing similarity to today’s Trump Administration. The story line is that the near-future U.S., renamed the Republic of Gilead, turns back to a patriarchal government in order to control women’s reproductive rights due to a major decline in population. The characters are well rounded and believable.

Network Aired On: Not yet known; series in development

While the book was published during the start of the sexual revolution, the late ‘60s, this upcoming TV series will make a great comment to today’s issues of transgenderism. According to io9.com, the novel was praised by critics as an early work of feminist science fiction and is even said to be “the most famous exploration” into unisexuality and transexualit.  The story involves gender-shifting aliens who a human ambassador must come to terms with for the intergalactic alliance he’s trying to include their planet in.

Network Aired On: SyFy; in development

With consumerism dominating our world, anxieties of digital technology taking over human activity, and the heated debate over genetic engineering of humans rising the timing for a series based on this novel may be perfect. The story takes place in a future utopia where people are artificially bred and kept content with legal drug consumption, both societal control methods being in the favor of a world ruler. The script for this series should be of good quality because graphic novelist Grant Morrison plans to write it as well as executive produce.

Network Aired On: ABC; in development

This espionage sci fi series will be based on one of the newer novels of the century. The story is an IT technician’s body is made host to an alien that uses him to fight a civil war with its own species. This show should be both entertaining and well developed in story like its book, especially when the author himself will be consulting on it. The other plus is that, according to Tor.com, producers who worked on Marvel’s Agents of S.H.I.E.L.D. and its spin-off, Agent Carter, will be producing this.  So the espionage should really come out in this series!

Network Aired On: Netflix; in development

“Considered one of the best ghost stories of the 20th century,” says Deadline.com, this adaptation of the Gothic horror novel about four people occupying an old mansion said to be haunted has a lot of potential. That’s because producers Mike Flanagan and Trevor Macey are experts in the horror genre. They have worked together on such horror films as Oculus, Ouija: Origin of Evil, and an upcoming Netflix film called Gerald’s Game (based on Stephen King’s novel of the same name).

If sci fi and fantasy authors continue to come out with best-sellers like the ones the above TV shows are based on, speculative television will never run out of ideas for new programs. This may not only make a golden age for sci fi/fantasy television, but also a second golden age for books of the genre. If viewers get hooked enough on these shows they may want to read the source material.

Steven Rose Jr. is a library technician by day and freelance writer and artist by night. He has written science fiction reviews and technology articles for several media outlets, including Examiner.com (which closed in 2016). His first short story collection, The Fool’s Illusion, was published in 2013 and he has more fiction projects in the works. Steven can be reached at his Facebook page and blog, A Far Out Fantastic Site. 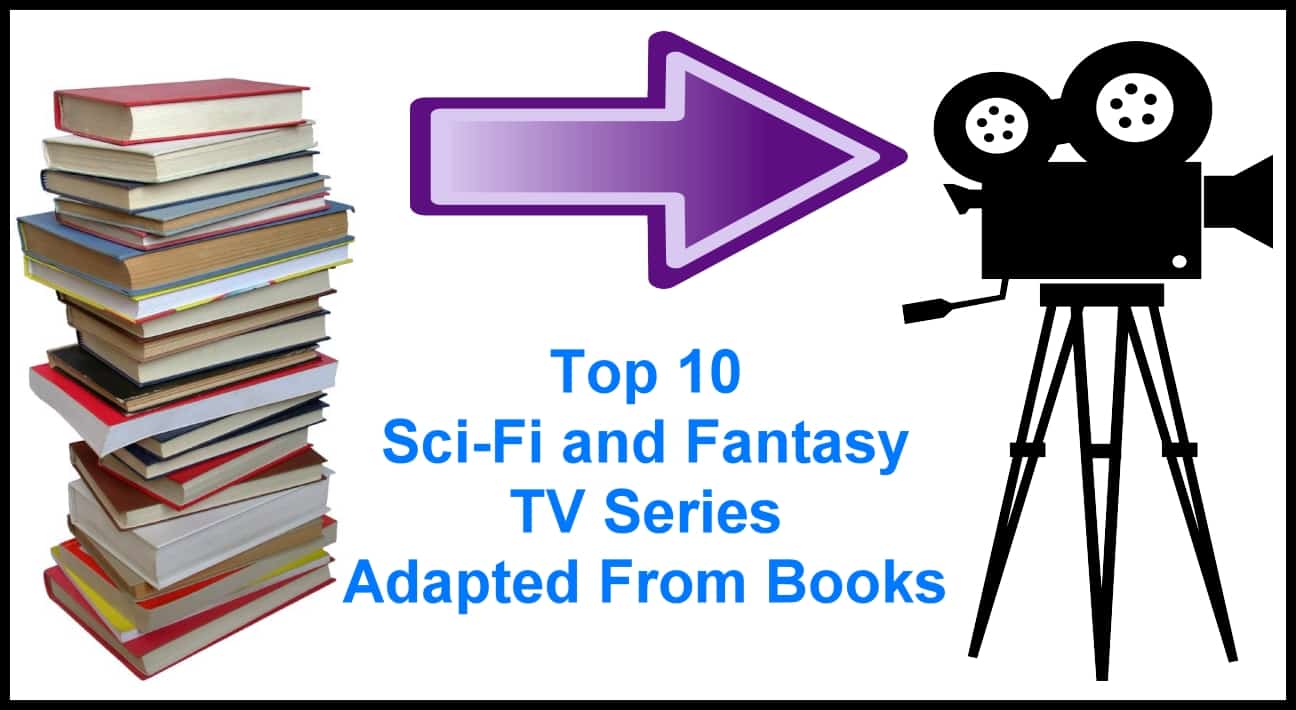 Article Name
The Top 10 Science Fiction and Fantasy TV Series Adapted From Books
Description
Until recently, television programming based on sci fi/fantasy books had been rare and so the below list of top TV series in the genre also includes shows not yet released. While the past and current shows can easily be talked about with accuracy, the future ones—because they haven’t aired yet—can only be, uh, speculated.
Author
Steve Rose Jr.
BuzzyMag.com