Why Nathan Fillion is Han Sol0 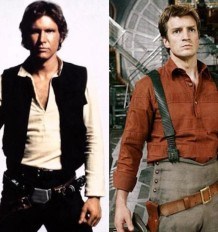 There isn’t anything, or anyone sexier than a Space Cowboy.

My absolute favorites are Harrison Ford as Han Solo in Star Wars (1977) and Nathan Fillion as Captain Malcolm Reynolds in Firefly (2002). After much*cough* research *cough* for this article, (I love this job.) I have become a Browncoat who wants to fight the Evil Empire with a proton gun and a light saber— in a space ship. (Also the costume for this would be the total awesome-sauce.)

But what makes a Space Cowboy so charming and magnetic to an audience?

First of all, any real cowboy hero has to be a bit of a pirate. (Rooster Cogburn in True Grit) Seriously, he or she needs to be the bad boy who follows the law when it is convenient and disregards it when they deem it necessary. This is the core quality of a Space Cowboy. Besides, everyone loves pirates (except ninjas).

The character also needs to feel, and to show a fierce loyalty to those who fight on his side. He’ll throw himself in front of a blaster to save a comrade—no hesitation and no thought for his own safety. Then, in a risky situation (where he has more time to think) like the “Oh crap. I don’t really like this crewmember all that well and do I have to die?” moment—he still risks life and limb.

Real space heroes are flawed. They drink too much. They gamble. They love money more than they really should, and their libido pushes them into bad decisions, and situations with questionable women. Seriously Mal, you’re going to pick her over the companion-with-a-heart-of-gold? But, their rakish charm and unabashed joy in their debauchery, as well as their awkward sorrow when they realize that they’ve broken someone’s heart, draws us back into fandom.

Space Cowboys are pretty— in a square-jawed, swaggering, broad-shouldered kind of way. (Not just anyone can swagger and not look like a dork.) They have beautiful eyes with long lashes, and whiter than white teeth that only show with their rare smiles. (Also, a grin from these guys make panties spontaneously combust which I’m sure is a perk they enjoy hugely.)

Not only women love the rogues of the outer- continuum. There’s not a civilized man alive who hasn’t, as a boy, dreamed of being an astronaut and soaring through the cosmos. Thankfully we still have books and movies to live out the fantasy. Every man is a hero in his own heart. Given the chance, they would all use the force, and really cool weapons to right universal wrongs. Also, it doesn’t hurt that Space Cowboys have the previously mentioned underwear perks.

By now you’re probably wondering how this all turns Nathan Fillion into Han Solo.

Let’s face it. Harrison Ford is one of the most awesome hero-actors around. He’s amazing not because he said the lines that were written, but by how he acted when he wasn’t speaking—the emotions etched on his face as he reacted to the situations his character survived. Without a word you knew he was thinking we’re all going to die. With a quirk of his mouth he conveyed the fact that he was speaking to a great big liar. A lift of his brow told you knew that he truly believed that he was business-dealing with an enormous bag of excrement and that said bag would try to kill him.

You knew all this because of the emotions he could convey without a word. Star Wars and Indiana Jones were wonderfully conceived and written but it took the actors to take it from paper and to make it real before our eyes. Obviously, Mr. Harrison Ford is wonderful at his job. Some guys are great actors, and pretty, and maybe they can pull off a swagger. But they’re not wonderful reactors.

I have no idea why these two men can barely move a muscle and still tell you things. I don’t think there’s a person in the free world who doesn’t know Han Solo, and Indiana Jones. Harrison Ford was a huge part of making those particular characters iconic. Nathan Fillion is well on his way to make his own parts as unforgettable as Mr. Ford has.

Mr. Fillion has already created an unforgettable role as Space Cowboy, Mal Reynolds. Even though Firefly only had fourteen episodes, and a follow-up movie demanded by millions of hard-core fans, his character is still remembered by all of the denizens of space-geekdom. The term Browncoat is used today as urban slang to describe a rebel who will fight for right—even if he’s on the losing side.

Don’t get me wrong. I also love Nathan Fillion in Castle. But Castle doesn’t fill the longing for adventure among the stars. So somebody out there should see that there’s a giant black hole to fill in the Space-Cowboy community and find Mr. Fillion a new adventure. I’ll be patiently waiting.