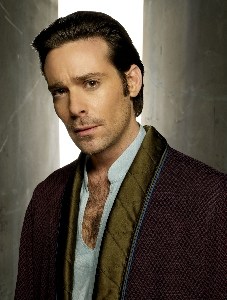 “Baltar is the crazy black sheep uncle who always comes to Thanksgiving drunk and hits on somebody’s new girlfriend…yet you always bring him back because he’s so funny.” -RDM

When we first meet Dr. Gaius Baltar he is in his element and at the top of his form. He is a brilliant successful secular humanist scientist who has access to the mainframe of the Caprican defense system. Every inch of him reeks of the narcissistic, hedonistic creature he has made himself into. It is clear that his talent for living the good life has not brought him the capacity to give or even really receive love. His ability to be a chameleon as much as his talent has given him the aptitude to pass as a whole human being at least to those he works with and the women he seduces. His current lover when the series begins is a statuesque platinum blond who he recognizes to be his equal or even superior in the field of computers. To Gaius’s amusement and even befuddlement she is also religious. This woman who is later called Caprica 6 loves him and she can see through the mask that he uses to keep people from knowing who he really is and the wall that prevents him from knowing himself. She is one of the twelve models of flesh and blood Cylons, called skinjobs by humans once their existence has been made known.

After the destruction of Caprica and the revelation by his lover that it was through Baltar’s own weakness that the Cylons gained complete control of Colonial defenses he is close to losing his sanity. When you have the weight of the destruction of billions of human beings upon you even the weakest conscience may stir. Unlike Duke Baltar of the original Battlestar Galactica who knowingly betrayed humanity this Baltar did so unwittingly. This Gaius Baltar’s conscience may have stirred but his instinct for self preservation was still stronger than his scruples. He gains a place on the Battlestar, worms his way into the inner workings of what passes for government and all the while has the most vivid visions of Caprica 6. That is the gorgeous, blonde, statuesque Cylon often seen in a red dress that drives the fanboys (and probably some of the fangirls) wild. Now I don’t mean he simply sees her. He interacts with her both verbally and physically. He questions his own sanity and is unsure if she is a construct of his own subconscious or a projection of this female he was involved with before the Cylons destroyed the 12 Colonies or even an implant in his brain that was placed there to control him. She both torments him and acts as his aid in navigating the treacherous waters which he must navigate to stay alive. To be found a traitor would mean a quick trip out the airlock so he uses all his acting ability to divert suspicion from himself and even incriminate another whom he believes to be innocent in order to save his own life.

Through the years the deceptions grow ever more complex and tangled and Gauis’s sanity is further compromised by this same self avowed “angel of God sent here to protect you, to guide you, and to love you” that is Caprica 6. Her ability to project herself into his brain is both a comfort and incredibly intrusive. Somehow during these years while still being a sneaky jerk and a slimy yet charming worm something fundamental has changed in him. He still does not seem capable of being a straight shooter.

What he has shed is that amoral fellow that we first met. Against everything he used to accept as reality, Gauis now believes in God. He prays to God. He gets angry with God. At times he defies God. But he is no longer an atheist or an agnostic. He asks God to take his life and spare the life of a small child that was dying. Sure, a part of him should understand that you can’t bargain with God but when it comes to an understanding of the Divine all too often people attribute to God some of the qualities they find in themselves and those around them.


It is easy to despise Gaius for the his many self serving actions but when analyzed critically most of those actions were not only not taken with the purpose of harming others but in many cases were done with the hope of bettering the situation for both himself and his fellow beings. Who among us can say they would gladly throw themselves to the wolves if they could figure a way around it?

In many ways Baltar is the most human of the core characters of Battlestar Galactica. His failings are ones most of us can identify with to some degree if we can be totally honest with ourselves. We all hope not to care so much for the approval and admiration of those around us, and yet…who among us can say that we haven’t been tempted and most of us have succumbed at one time or other. Most of us want the “good” things of life. Creature comforts, entertainments and diversions, sex. But Gaius Baltar when we first meet him is almost arrogantly obsessed with his pursuit of these things. As viewers we have the luxury of perspective to despise him. Actually he is far more than competent, he is inspired and considered to be a genius. Family, true friends, service for the sake of helping rather than the pursuit of glory was utterly foreign to him at first. In time we learn what made him this way in adulthood. It was his loathing of his childhood. His coarse father. His backward planet that offered only an existence as a substance farmer or fisherman that drove him to excellence but also to deceit and conceit to cover for his roots.

Most of the other Battlestar Galactica characters are larger than life. They bare something inside them that marks them for greatness. Take Laura Roslyn, a dying teacher and administrator who assumed the mantle of the Presidency and led her people through the most difficult period of their history? She was willing to get her hands dirty, face down the military and handle political infighting as if she had been born to it. It takes a lot to shake her from doing what she knows to be right and the cost be damned. Or what to make of Admiral Adama whose life had been defined by his service in the fleet. At the edge of retirement he is thrust into the position of defending the last of his species with no idea as to where they could find refuge. He learns how to stretch his view of life without betraying his principles. Those are just a few of the pivotal characters who fit the bill of iconic figures if not at first then after going through trial by fire or should I say fires.

Baltar’s redemption and the healing of his mind takes the longest to achieve but in the end he has come to accept his past and live in the present. He has come full circle in life and can now appreciate the gift of living.