JMW: Hello. This is Jean Marie Ward for BuzzyMag.com.

With me today is Tim Powers, the award-winning, best-selling author, an inspiration for both “Steampunk” and “Pirates of the Caribbean: On Stranger Tides

JMW: We’re so glad you could make it. What inspires you to set a book or story in a particular time and place, such as the early 1700s of “On Stranger Tides” or the contemporary 1920s crossover of “Medusa’s Web 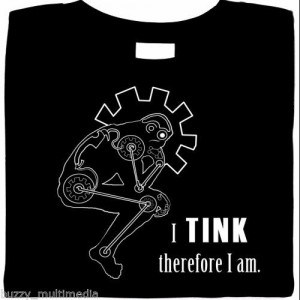 Shop – I TINK Therefore I Am

Tim Powers: Well, actually, basically I’ll be doing idle reading for fun, just for entertainment, and it will strike me that some period looks like it’s rich enough in colorful details, that a story could probably be set in it. For example, Blackbeard and all the pirates in the Caribbean in 1718 struck me as, very likely to have enough color and drama to support a novel, given voodoo, fountain of youth. And so, trusting that there would in fact be enough cool stuff to be found in researching all that, I decided to embark on it.

Certainly, the research did provide all kinds of colorful locales and characters and weather and political conflicts and all that. Same with the 1920s. My wife and I have always been fascinated with the Hollywood culture in silent movie days, so I knew that there was lots of great mystery and drama and wonderful locales to use in that. So, I decided to actually research it and make calendars and see what kind of story would fit into it.

JMW: Lots of mysteries and mysterious disappearances in that period.

JMW: Oh, we always need mystery. How do these worlds intersect or do the worlds of your novels actually intersect?

Tim Powers: In general, no. My books each occupy their own world and don’t bleed over into one another. The only time I’ve ever done a book that was set in the same world as another was “Hide Me Among the Graves,” which takes place in the same world as my book, “The Stress of Her Regard,” and that was accidental, because I read that Dante Gabriel Rossetti, after his wife committed suicide, he laid his notebook of poetry manuscripts in the coffin with her. And then a couple years later, a publisher said, “If you had a book of poems, we could publish a book,” and he said, “Give me a couple days,” and dug her up.

So, I thought that looks like it would sustain a story. In researching it, I found that in fact several characters from “Stress of Her Regard,” who were real historical characters, participated significantly with the Rossetti’s and I thought, “Well, it’s a sequel. He didn’t mean it to be, but it looks like it has to be.”

JMW: I understand from Serena that there’s actually more stories that intersect?

Tim Powers: As a matter of fact, now that I think of it, that’s true. I wrote three books, “Last Call,” “Expiration Date,” and “Earthquake Weather,” which are directly connected with the same characters in all three books. So yeah, there’s that trilogy and “The Stress of Her Regard” and “Hide Me Among the Graves.” Aside from those five though, everything else has been standalone, unconnected.

JMW: Speaking of intersection or lack thereof, you, James Blaylock and KW Jeter were the original Steampunks. What was the origin and your meaning of the term?

Tim Powers: Well, the origin was that Roger Elwood in the 1970s wanted a series of books about King Arthur reincarnated throughout history, and KW Jeter drew Victorian London and found a research book which is, “London Labor and London Poor,” by Henry Mayhew. Originally about 12 volumes, but you can buy two or three volumes that kind of collect most of it.

The Mayhew books were such thorough explorations of low-life London, legal, illegal, thieves, prostitutes, brewers, street-cleaners, street-sweepers. It was so thorough that you simply had to use it to write a book. All your research is right there. So, Jeter not only wrote his book “Morlock Night” using Mayhew, but Blaylock and I both on reading it ourselves, said, “I’m going to do it, too.”

So, I wrote “The Anubis Gates,” Blaylock wrote “Homunculus.” Since we all three wrote books about 19th Century London, using as our research the Mayhew books, it looked like a coordinated effort. Now, actually of course, there had been books you would call “Steampunk,” published earlier. Michael Moorcock’s “Warlord of the Air,” Harry Harrison’s “A Transatlantic Tunnel Hurrah.” Those were obviously what we call Steampunk, but because we all three did it at the same time and because Jeter invented the term “Steampunk,” it’s sort of considered that it started with us, which it didn’t, but I don’t mind if people think that.

When Jeter made up the term, it was sort of a joke-play on “Cyberpunk,” which had been a big movement then in the mid ’80s. So, we had no purpose, no kind of agenda or organized anything we wanted to accomplish, except have science fiction or fantasy stories that use all that colorful, “Jekyll and Hyde”, “Jack the Ripper”, “Mary Poppins” color that’s in 19th Century London. Other people have taken the whole notion of Steampunk and carried it on now to all kind of different places. But yeah, in the beginning, we had not only no purpose, but no idea that anything further would come of it.

JMW: So, the movement kind of came as a surprise?

Tim Powers: Yeah, Jeter wishes he had trademarked the word.

JMW: I can understand that. Many of your novels focus on the quest for immortality. What is the source of this fascination, or is it just a metaphor for the writer’s quest for literary immortality?

Tim Powers: I don’t think it’s for literary immortality. I sort of figure, I hope my books stay in print and earn royalties as long as my wife and I are both alive, but after that, I don’t care. I think all the characters in my books that want immortality are bad guys. I think I see it as a desperate attempt to, as it were, stay in high school and never have to move further, scared of whatever the next step might be. Since they’re bad guys, the next step is likely involve bad karma, hell, purgatory, bad stuff like that, and so they want to stay immortal in order to keep on being able to eat nice hamburgers, drink nice beer and never graduate.

JMW: Or never have to go for plastic surgery in the case of Hollywood.

Tim Powers: Right. They would definitely want to stay youthful-looking too.

JMW: You also teach writing in a number of venues, including the University of the Redlands, and the Clarion Writer’s Workshop. How have your experiences as a teacher influenced your writing?

Tim Powers: Oh, it makes me write because I feel guilty when I see how industrious they are. Right now, I teach at Orange County School of the Arts in Southern California, and it’s high school students and they’re all extraordinarily bright. It’s not a random selection of people, so I suppose again, guilt. I see how bright and industrious they are and think, “Powers, you better get busy yourself.” I think the example of energetic people makes me think I’d better get busier myself. 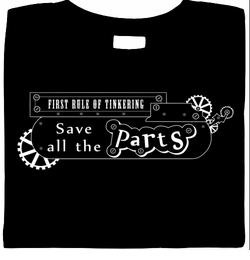 SHOP-First Rule of Tinkering
Save All the Parts

Tim Powers: Right now, I’m in the middle of a novel set in Los Angeles now. It’s going to involved freeways, because I was reading Joan Didion and she has fascinating perspective on freeways. And of course, it’ll involved lots of supernatural adventures.

Tim Powers: Yeah, but in a very accurate Los Angeles setting. It won’t be alternate universe.

Tim Powers: Yeah. It’s fun to be able to just go drive to the place you want to have a scene occur at, to have lunch on the way.

JMW: A lot of good restaurants down there. We’re coming up against the end of the interview. Is there anything you’d like to add?

Tim Powers: Maybe just that, sometimes I have seen my stuff described as alternate history or alternate universe. I always want to say, “No, no. It’s this universe. It’s this Los Angeles, not an alternate one,” because I do, always… I’m always aware of the necessity of making the reader think it’s really happening to real people in real places. I know as a reader, I hate it if the writer deliberately or accidentally does anything to remind me that in fact, this isn’t real. In fact, this is fake. So, I always want to scramble to try to convince the reader, “No, this is here. You could drive to this place. It’s real.”

JMW: And thank you, for BuzzyMag.com. 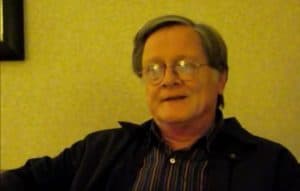 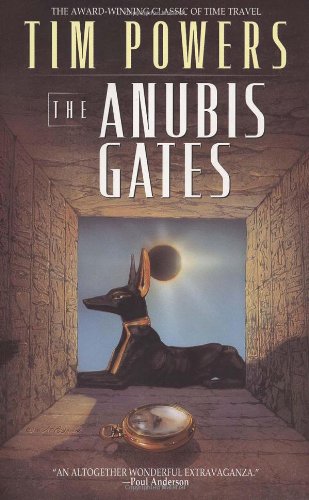 Title
An Interview with Author Tim Powers for BuzzyMag.com
Description

Tim Powers, the award-winning, best-selling author, an inspiration for both “Steampunk” and “Pirates of the Caribbean: On Stranger Tides.” Welcome, Tim.