Truelove is a producer with the Independent Film Company, House of Diggs. He is also Co-Founder of Psychic Wing R&D, specializing in Video Production, Marketing Strategy, Technical Consulting and Editing.

JMW: Hello, this is Jean Marie Ward at DragonCon for BuzzyMag.com With me today is Thom Truelove, a producer with The House of Diggs and one of four founders of Psych Wing. Welcome, Thom.

Thom Truelove: Thank you very much for this opportunity and it’s a pleasure to be at DragonCon.

JMW: Can you tell our viewers a little bit about the House of Diggs?

Thom Truelove: The House of Diggs is one of the newest independent production companies in Hollywood. The founder, Jimmy Diggs, was the most frequently rehired freelance writer for Star Trek, both for Deep Space Nine and for Voyager. More than any other freelance writer he saw his stories reach the screen. He’s now gone independent, he’s dedicated to science fiction and unusual tales and that’s his focus with the House of Diggs. My function as a producer with that is facilitating many projects for the small and large screens.

JMW: How did you get involved with production in Hollywood when I’m meeting you here in Atlanta?

Thom Truelove: I live actually close to Philadelphia, so it’s obviously an internet story. Jimmy Diggs was looking for someone who could speak with some authority on what steampunk is and what the steampunk would like it’s expression to be on television. He felt he didn’t have any chance of reaching whoever the Kevin Bacon of steampunk was so he reached out to me on Facebook and explained exactly that, “I don’t know who the Kevin Bacon of steampunk is, I’m a little afraid to contact him, do you mind if I ask you some questions?” It’s actually a long and involved story how that wound up me working on his projects but the short answer is his first four entirely logical steampunk questions, I either did know the answer or I was a phone call or an email from knowing someone who did and that’s when he said, “Welcome aboard.”

Thom Truelove: The House of Diggs flagship project is something called the Crypto-Historians. It takes important tales that have been neglected by history books and spins them into the steampunk sensibility without altering too much of the true story, the important heroism, of these lesser known and less emphasized heros and puts them in front of an audience that really does need to know these stories too. Eugene Jacque Bullard was a pilot in World War I with the French, he’s played by Tim Russ who played Tuvok on Star Trek: Voyager. A black pilot in World War I should be a surprise given the current climate of storytelling but given the justice of what history can be it shouldn’t be a surprise. That’s Jimmy’s focus, he wants to take all kinds of stories like that, give it the steampunk imprimatur and get it on television.

JMW: And World War I is sort of the steampunk war.

Thom Truelove: Steampunk, I think, ends in World War I, so much changes as a result of that war and in the direct aftermath of addressing those consequences. The other end of steampunk goes back to Benjamin Franklin. The age of steam is much longer than other people give it credit so there’s a lot of room to play with steampunk in almost hundreds of years, not just a decade.

JMW: And a lot of neglected heros.

Thom Truelove: Plenty of neglected heros and Tim Russ’s character isn’t the only one. There are a fair number of people that are coming to the project who are playing additional heros. Jimmy has asked permission to use one of the stories from my own family tradition about a very specific and highly steampunk event but I don’t know if we have time to go into that one.

JMW: Oh, if you can keep it short, I think we might.

Thom Truelove: My grandmother was a telephone operator on Halloween in 1938.

Thom Truelove: And everyone talks about, when they tell that story, it’s the people who are out hunting the Martians or panicking in the streets. It’s not an emphasis on, the people who were the first responders in that time were the telephone operators. They heard more about it from the people who were calling. “Should I call my doctor, shall I call the police, what should I do?” but they didn’t have a radio so to them it was very real. The story in my history, I don’t know exactly what changes Jimmy will have to make to get it on screen but the story in my family is that my Grampa had called my great grandmother and said, “If this is the last day of earth, please come down here and spend it with me.”

JMW: There were stories like that. I heard of it from my parents and my aunts and uncles who were much older than my parents. That was a rather awesome, it shows the power of the story.

Thom Truelove: It really does and Jimmy and I are of a mind that every person has these stories, if they’re willing to go and ask their parents, their grandparents, your great grandparents if you are lucky enough to have them. Even if you don’t have that advantage, you certainly have friends, ask them for theirs and be willing to listen. Jimmy’s taking that willingness to listen and to do a little bit more than the Wikipedia level of research and find stories that still should matter and make them matter again. That’s one of the big reasons why I’m on-board with the House of Diggs.

JMW: That sounds wonderful but in addition to your television work and producing with the House of Diggs, I understand you write fiction?

Thom Truelove: Yes I do.

JMW: What can readers expect in that line?

Thom Truelove: Independent from the House of Diggs and probably with the Psych Wing I eventually do hope to get an Urban Civics Fable produced as a short film. In terms of novels I’ve been given a great gift by the Cosmos of a collaborator I can work on three novels with. One is sort of a sideways orientation on a generational saga. It starts in the far distant past of England before it was England and ends up in space when no sun sets on the British Empire. Another is an explanation for why I’m dressed. I’m exploring, within the premise of the novel, things that happened during World War II that are still classified in 2016, possibly 2040, showing an underserved aspect of the Royal Air Force, the Women’s Royal Air Force and what some of the classified missions could have been, if you slightly change the rules of physics and magic.

JMW: Just a little bit. It wouldn’t be speculative fiction if we didn’t make that change.

Thom Truelove: You have to speculate first.

JMW. Yes. Is there anything you’d like to add?

Thom Truelove: I want to follow on from that. The gift of the Cosmos, the collaborator I’m pleased to work with is Leanna Renee Hieber who has been writing novels for far longer I thought I had the capacity or the opportunity to explore, so to some extent I’m relying on her experience in the industry and, I hope, attempting to challenge her to look as stories a little bit differently. It’s remarkable to me how without deliberate effort that she and I can end up writing in the same voice, and comfortably so.

JMW: Even though you came from a screen writing background to . . .

Thom Truelove: Yes, absolutely and I think one of the reasons for that, before screenwriting one of the things I did was actually actual science, which is not her forte, and since some of the things we’re working on is science fiction and good science fiction does have some science in it, that’s one of the things she’s turning to me for, perhaps. Jimmy Diggs and Leanna Renee Hieber are the two people who have entreated most my ability to actually see that dreams maybe sometimes do come true.

JMW: Oh, that’s a great way to end this. Thank you so much, Thom.

Thom Truelove: Thank you very much. 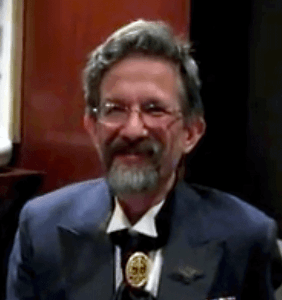