JMW: Hello this is Jean Marie Ward, for Buzzy Magazine. With me today is Stuart Jaffe, who is both an author and a podcaster, of the Eclectic Review, a weekly half hour podcast. And his good friend and collaborator, Cameron Francis, who is himself a magician, and not only has performed at the Magic Castle, also does instructional DVDs on magic. Welcome Gentlemen.

JMW: How did you guys start working together?

Stuart Jaffe: Well, Cameron and I actually went to college together, did undergraduate work in theater. And then went our separate ways, and it was years later we reconnected through your magic.

Cameron Francis: That’s right. So, basically I have a website, he went on there and bought one of my DVDs for his son, who was really into magic at the time. And so I said is that Stuart Jaffe, out of college? So I e-mailed him and said I will just send you this DVD for free, great to hear from you. And that’s how we sort of reconnected at first. And then a couple years later, Stuart got in touch with me about the prospect about doing a novel which incorporated magic in the novel, actually magic tricks in the novel.

JMW: What is that novel called?

Stuart Jaffe: The book is called, “Real Magic“. It’s a time travel fantasy about a poker cheat/sleight of hand magician who ends up going back in time to 1934, which is pretty much when modern sleight of hand is born out of poker cheats, and he has to use his skills to try and survive and hopefully get his way back.

Cameron designed tricks specifically for the book, as well as adapted period-specific tricks for the book. We have about nine or so tricks in the books that are fully explained, so you can do them. And then there’s also tricks, famous tricks I guess you would say, that are referred to that aren’t necessarily explained, but you see them, and other little things like that.

JMW: Okay, this is very fascinating to me. I always thought that sleight of hand was a form of stage magic that has been around forever. But you’re saying it only started since the 1930s?

Cameron Francis: Well, no, that’s not true. Sort of the modern way that sleight of hand magicians perform, card magic especially, evolved more around the turn of the century, and then sort of came to a head in the ’20s, ’30s, ’40s.

And what happened was it was taken . . . so there was a book called “Expert at the Card Table” that was written, and there were a lot of magicians. And it was about gambling and cheating moves really, but a lot of magicians took that text and they started adapting a lot of moves to sleight of hand.

And that happened in the part of the 20th century, so when you’re talking 1934, you’re talking a period where it was just really blossoming, let’s say. And that’s where a lot of the modern magic that we see whether card magic, mostly card magic, came from that era.

JMW: And it’s still very popular today, I mean you got street magicians doing it all the time. That’s very, very cool. Is this a one off project, or do you plan to collaborate?

Stuart Jaffe: It was initially a one off project. The response has been really positive. A lot of people have been asking if there is going to be a sequel. I don’t think we really want to do a sequel, because we wrote it as a standalone novel. But we are talking about, we’re just at the beginning stages of talking about doing something again that involves the same concept of putting magic into a fantasy story. But I think it would be new characters, a whole new story, that way we can explore some other aspects of magic that we haven’t touched on yet.

JMW: How did this particular novel relate to your other works? I know you have done a supernatural detective, you have a dystopian fantasy novel, you’ve got 12 novels out now?

JMW: And how did this fit into that general stream, or did it?

Stuart Jaffe: Well, it’s fantasy for one thing. I write a vast array of subgenres, but there all within fantasy and science fiction. A lot of them tend to mix. I have a post-apocalyptic fantasy where you’re mixing fantasy and science fiction tropes and that kind of thing. So here we have time travel which is generally a science fiction trope, but I make it through a magic door. It’s a fantasy element there. There is play, as with any time travel story, with how things in the past, if you change them, and there going to affect other things and all those other problems. So it actually fits quite well. It’s got magic, it’s got time travel. I’m happy.

JMW: Is this the first fictional project you’ve ever worked on, Cameron?

Cameron Francis: In terms of a novel, yes. I’ve never attempted to write a novel on my own, and I’ve certainly never collaborated on one, so yes.

JMW: Did you find similarities with your work on instructional videos, or did you feel like a duck out of water?

Cameron Francis: No, actually I felt really good about it, because I’ve also written up tricks for magazines, and for my own publications. So the writing up with them I’m very familiar with. [inaudible 00:05:46].

The trick was of course writing them up, and having them put into the novel, so the narrative is broken up a little bit to explain the trick, but it still flows. And that’s kind of the trick of it I think. I think we pulled it off very well. It’s kind of seamless. So it was interesting, it was different, but certainly not too intimidating.

JMW: What are you working on now? I mean are you making more instructional videos? Do you have a tour coming up?

Cameron Francis: Yeah, I’m working on a magic book of my own creations that will be published next year. So that’s basically just a book of tricks basically, it has no kind of story line to it, so there’s that. And I have some other, on the magic side of things some other projects, I’m working on another DVD. Yeah, doing a few conventions and things like that, so I’m keeping busy.

JMW: There is no onus to keep these tricks secret?

Cameron Francis: Well, that’s a good question, and there is of course. My feeling is this though, if you’re reading the book and you actually pick up a deck of cards and follow along and learn the trick, then to me that means you have an interest in magic, and if you have an interest in magic, then I see no problem with teaching someone who has an interest some self-working easier tricks to do that are still very effect. Because it takes effort to learn them.

A person can read the book and just skim through the explanations, and just keep reading. [Inaudible 00:07:19]. And to me, I feel like if you reading the book and you’re following along, that must mean you have an interest, so great, you know, pursue it.

JMW: Cool, and Stuart what are you up to now?

Stuart Jaffe: I’m in the middle of writing a science fiction right now, with like a Lost-ish type of bent. So that’s what I’m working on, and I’m about halfway through, so I’ve got a way to go.

JMW: And what’s coming up in the Eclectic podcast?

Stuart Jaffe: I have no idea. We do it week to week, and I did the last one, and it’s my wife’s turn. She’s the cohost; it’s her turn to come up with the main topic. We’ll have reviews of . . . I can tell you what I’ve watched recently we’ll have reviews of The Colony, which was a mediocre science fiction movie. And I’m almost done reading a book called “Fourteen”, which I’m loving, it’s kind of a weird horror book. It has Nicolas Chesla [SP] in it so.

JMW: Hey, anything is Chesla has my vote. Frankly, I’m not an innocent girl, I’m a Chesla girl.

JMW: Absolutely. I married a Slovak. What do you expect? Do you find it hard to work with your wife on the Eclectic podcast?

Stuart Jaffe: On the show, no. We started the Eclectic Review, were one of the oldest genre podcasts around, we’re 8 years old, coming up on our 400th show. So 8 years ago my son was a little kid, so doing this show together weekly was a way to guarantee that one day a week for a little while, we could have an intelligent conversation that wasn’t about kid stuff. And of course he’s grown up now, but kept doing it, we got addicted to it, it’s fun, and we enjoy doing it.

JMW: Cool, well thank you both and thank you for Buzzy Magazine. 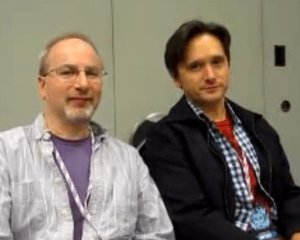