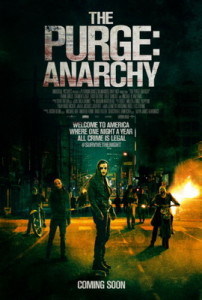 One year ago, I was singing the praises of The Purge, a low budget dystopian thriller that used a combination of tight scripting, solid worldbuilding, minimal special effects, and focused violence to show a frighteningly possible near future. I was eager to revisit the world created in The Purge, and curious to see where a sequel would go.

This near future has low crime and low unemployment, thanks to the “New” Founding Fathers institution of a yearly Purge. For twelve hours, anything goes. Crimes will not be punished, police, etc. will not respond. People can look for vengeance, or just go wild and get it out of their system.

The Purge: Anarchy is bigger than the first film, but not necessarily better. There’s a solid look into the world here, this time focusing on the disadvantaged–those who can’t afford to hide behind expensive security systems, with all the safety money can buy. There are glimpses, too, of the ultra, ultra wealthy, and how they handle the possibilities of a lawless night.

The main plot thread follows a group of five people who are brought together out on the streets, unintentionally, during the Purge. There’s some good action and a lot of tension as they look for somewhere to wait things out in safety.

That might have made a really good movie, in and of itself, if it stayed focused. But . . .

They’re being chased by two different groups, whose identities and motivations aren’t made clear until very late in the film. When you look back and think about it, some of

There’s even another player in the game, the cavalry if you will, that shows up in a deus ex machina kind of way, with no real explanation for how.

So, very interesting worldbuilding, but held back by a weak plot and some scenes that didn’t seem to fit in well. Also, too much of what happened depended on people acting stupidly. In a world that included a 12-hour Purge, you’d think people would plan better. But that’s a different movie . . .

Frank Grillo is in his sweet spot here, playing a tough guy of mysterious motivation with some kind of military/law enforcement background. He owns this one. Real-life couple Zach Gilford and Kiele Sanchez play a bickering couple tolerably well.

Carmen Ejogo and Zoë Soul (as mother and daughter) were either mis-cast, or poorly written. For the first few minutes they were onscreen, I thought they were sisters–until the word “Mom” was uttered. Zoë’s character was inappropriately aggressive towards her mother, hauling you right out of the movie.

Why a sequel? The original had a production budget of three million dollars, and grossed more than eleven times that on opening weekend alone–over a span of nine weeks, foreign and domestic, it grossed over eighty-nine million dollars. Maybe they should have stopped while they were ahead . . .

For fans of dystopic science fiction only (you know who you are), otherwise wait for it on cable. Or Netflix. 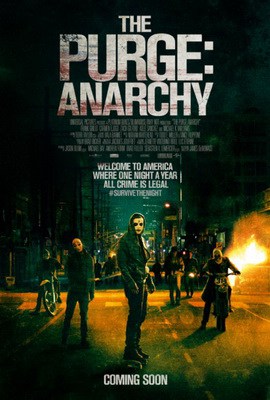 Article Name
The Purge: Anarchy - Movie Review
Description
One year ago, I was singing the praises of The Purge, a low budget dystopian thriller that used a combination of tight scripting, solid worldbuilding, minimal special effects, and focused violence to show a frighteningly possible near future. I was eager to revisit the world created in The Purge, and curious to see where a sequel would go.
Author
Elektra Hammond
BuzzyMag.com