The Massacre of Mankind by Stephen Baxter 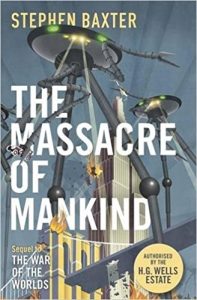 The Massacre of Mankind by Stephen Baxter (2017)

THE WAR THAT DIDN’T REALLY END.

Twenty years after their stillborn first invasion of planet Earth, Martians make a second meteoric landing cutting a swathe across the English countryside. Their assault this time is even more deadly, anticipating all resistance and spreading destruction to America and beyond. Told from the perspective of The War of the Worlds’ narrator’s sister-in-law, The Massacre of Mankind is the authorised sequel to H. G. Wells’ SF classic of 1897.

The first point to note about The Massacre of Mankind

is that it has been written by a bona fide science fiction author, not the sort of dilettante who (vale, Sherlock Holmes) scavenges a living by ineptly rehashing works now in the public domain. Whatever might be thought of the notion of allowing a sequel to The War of the Worlds, one cannot contend that Stephen Baxter hasn’t been diligent in his attempt. 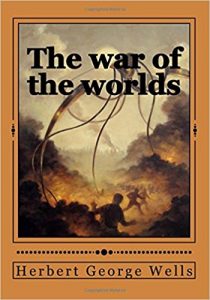 The War of the Worlds by Herbert George Wells (1897)

The alien invasion depicted in The Massacre of Mankind is science fiction in its purest form; that is, a prediction of what might reasonably occur given the known facts. Such extrapolation is difficult enough under the best of circumstances, but in this instance has been constrained further by the need to build upon events of the original novel and stay true to science as it was known in the late nineteenth and early twentieth centuries. Stephen Baxter succeeds not only in putting in place this retroactive anticipation, but also in crafting a plausible, recognisable alternative world history branching off at those points where the Martians invaded.

This, however, is not the full extent of his achievement.

The Massacre of Mankind stems from The War of the Worlds yet does not rely on it. The novel could easily stand alone. And yet, though staying true to Wells and in no way undermining his original work, Baxter nevertheless manages to redress what to modern readers appear imbalances in that text.

The first of these is The War of the Worlds‘ deus ex machina ending, which is sound in its science but comes as a let-down. (Unaffected by anything the human characters do, the Martians just die! They succumb to Earth’s bacteria.) Baxter explains that this is not, in fact, a deus ex machina solution at all, even within the original book. Nevertheless, The Massacre of Mankind ipso facto addresses it, Baxter’s continuation of the interplanetary conflict transforming the Martians’ abrupt and total defeat into a mere setback in the wider struggle. Further, Baxter pays Wells the homage of ending his own book with a deus ex machina. and then continuing on to prove that this, also, wasn’t. The intertextuality is subtle but astute. 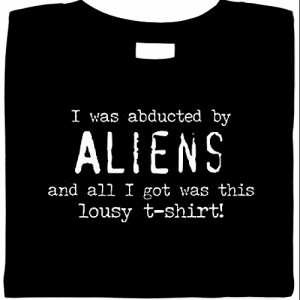 I was abducted by Aliens and all I got was this lousy t-shit! 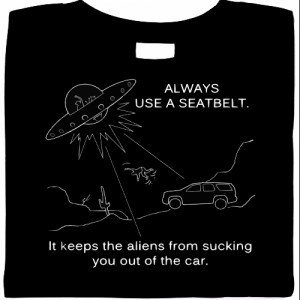 Always use a seatbelt.
It keeps the aliens from sucking you out of the car.

The second correction Baxter makes is to the apparent misnomer in Wells’ title. War of the Worlds? one might ask. The first invasion is limited to a small patch of England! Although careful to point out that Wells meant ‘worlds’ in the sense of their ecologies, not civilisations, Baxter nonetheless broadens the war’s scale, landing his Martians in America, Australia, China, Turkey, South Africa, Russia, Germany. To some extent this disrupts the narrative build-up, but as this build-up is to Baxter’s pseudo deus ex machina, perhaps that doesn’t matter!

The third and most significant change that Baxter initiates between The War of the Worlds and The Massacre of Mankind is to recount events from a female perspective – and not just any woman’s; he chooses the original narrator’s sister-in-law, who appears for several chapters as a minor character in The War of the Worlds and, though not poorly treated by the literary standards of the time, to twenty-first century eyes comes across as rather condescendingly dismissed. In Baxter’s novel she not only has matured to become a suffragette and newspaper journalist (her profession allowing Baxter to update yet still evoke Wells’ prose style), but also evinces a resoluteness and heroism more historically representative of women whose countries have endured wartime occupation.

All told, The Massacre of Mankind is excellent science fiction, not merely following with assuredness in H. G. Wells

‘ footsteps – a feat many would have judged impossible – but indeed adding to our appreciation of The War of the Worlds itself.

It has been 14 years since the Martians invaded England. The world has moved on, always watching the skies but content that we know how to defeat the Martian menace. Machinery looted from the abandoned capsules and war-machines has led to technological leaps forward. The Martians are vulnerable to earth germs. The Army is prepared. So when the signs of launches on Mars are seen, there seems little reason to worry. Unless you listen to one man, Walter Jenkins, the narrator of Wells' book. He is sure that the Martians have learned, adapted, understood their defeat. He is right. Thrust into the chaos of a new invasion, a journalist - sister-in-law to Walter Jenkins - must survive, escape and report on the war. The Massacre of Mankind has begun