An Ode To Cthulhu
by Theresa Bane 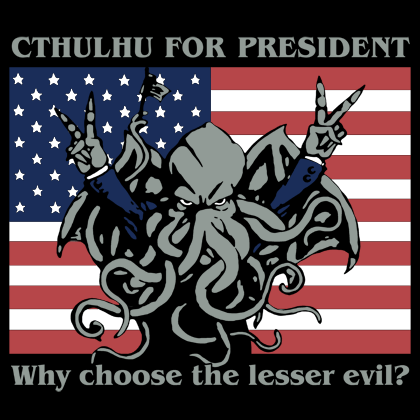 I don’t know how “normal” people are introduced to the world of H. P. Lovecraft, but for me I think it was via “Mad Magazine”. Crazy, I know. I was a little kid, maybe in the fourth grade, when I came upon an issue which had a two-page spread dedicated to Lovecraft in their own special way. Like only “Mad” can, they had taken popular songs and set them on their ear by replacing the lyrics with their own. There were likely six or eight such parodies but I only remember part of one. They took the song “Chattanooga Choo Choo,” originally written by Harry Warren and Mack Gordon and popularized by Glenn Miller and His Orchestra. The whacky “Mad” writers morphed this jaunty little ditty I knew so well to their evil and twisted liking. I can only remember the first verse of the parody but it went like this:

Is that the lair of great Cthulhu?

In the city of slime,

Where it’s night all the time?

I knew the original song well and being ever curious, had to go to the font of all knowledge, my Dad, and ask him what the heck I was reading. He did the correct parent thing, looked over my reading material and after careful deliberation said to go to the library and look up the author Lovecraft. I have to admit I was a little excited when my school library did not have any books by Lovecraft, as this was a sign they could be awesome. They also did not carry any “Conan the Barbarian” books, and I loved those. I checked out a book of Lovecraft’s short stories from the public library and set to reading it as soon as I got home. Around midnight, when I woke up screaming, the whole household was also introduced to Lovecraft.

Fun times.
A while back I did a blog called “Ode to the Tribble” where I wrote in Dr. Seuss-ian style a tribute to the best “Star Trek” episode ever, “The Trouble with Tribbles,” so I figured why not Cthulhu? I’m no Gilbert and Sullivan, but I do love poetry, and that being said, it is with my luke-warmest apologies to Maya Angelou that I parody her poem, “Still I Rise.”

Hibernating in the South Pacific
In an underwater city called R’lyeh
Surrounded by Deep Ones and Mi-Go
One day, Cthulhu will rise!

Does this Cthulhuian knowledge haunt you?
That his coming for man spells doom?
When the ocean churns and swells
Cthulhu will be coming soon.

When the planets align with the sun
And comets fill the darkening skies
You know now the end is nigh,
This is when Cthulhu will rise.

The walls of his prison will be broken,
Heavy lids lifted from his sleeping eyes.
The culmination of his acolytes plots
Reach the ears of He Who Will Rise!

Imprisoned, sleeping Cthulhu
Dreams of an Earth that is charred
And by his resolve reality will be redefined
As the dimension is shaken and jarred.

Cultists chant unholy words
As blood runs from their eyes,
When they gaze upon the ugly
Tentacle headed, Cthulhu arise!

His fibrous face will offend you,
Rudimentary wings so he can fly,
Grotesque body as big as an island,
Whose voice will destroy your mind.

From across the universe, vast and wide
Up he comes on a swelling tide.
A thousand year reign of terror and fear,
Cthulhu rise!

As he sleeps he dreams of the Night of the Graves,
When deathless Cthulhu makes mankind his slave,
Cthulhu rise!
Cthulhu rise!