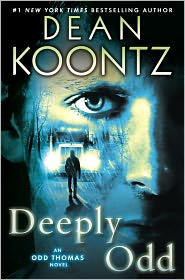 I had all but given up on the Odd Thomas Series. The first book in Dean Koontz’s series was so good that I had high hopes of every subsequent book being just as amazing. It was not to be though, and I’d resigned myself to giving up on the series if Deeply Odd didn’t come through with a great story.

It did. Deeply Odd is the best of the series after the first Odd Thomas book. It brings back a lot of the humour and the hope that seemed to have drained away from the series in the last few incarnations.

The character of Odd Thomas has always been the highlight of the series. Odd is the perfect humble hero as he uses his psychic abilities to try and help both the spirits of the dead and the innocent amongst the living. Odd’s quirky humour and gentle nature is on full display in Deeply Odd as the terrible things he is forced to go through make him better, not darker. The more monstrous his opponent, the more determined Odd is to be a good person.

Deeply Odd also goes a long way to fleshing out the wider world Odd lives in. The story goes a lot more into what Odd is actually up against as he travels America following his instinct to help people. It helps to give the book a feeling of real consequence, both for Odd and the other characters. It also makes the series cosmology a little less inscrutable while allowing the reader’s sense of mystery to remain intact.

By far the most important thing that Deeply Odd does that other books in Koontz’s series haven’t done is that it’s brought back the hopefulness of the first Odd Thomas. I finished Deeply Odd feeling uplifted and intrigued about where the series was going, despite the horrors that the protagonists have had to endure.

Koontz also introduces a fantastic new character in the form of Edie; a limo driving, gun toting, child rescuing octogenarian who comes across as a combination of favourite grandparent and Chuck Norris. That Koontz manages to make her character both believable and sympathetic is a testament to his skill at character building. Edie is genuinely mysterious, but she’s far less inscrutable than previous companion characters have been.

Deeply Odd isn’t perfect; it strays into preachy territory about the state of humanity more than once and regardless of how doomed you think the human race is, it can be jarring. Also, the final battle sequence is a little too long and feels like it could have been cut by a third and still made perfect sense.

Koontz makes up for these two flaws by including Alfred Hitchcock as Odd’s famous ghostly companion for this book (in the past Elvis and Frank Sinatra have made an appearance). He and Edie help to lift the whole tone of the book. Where previous ghosts have been melancholy, Hitchcock is mischievous and fun loving. He’s an extremely well realised character and his presence again offsets some of the truly awful things that happen.

My only other complaint is that the Odd Thomas books always make me hungry because of the endless delicious sounding descriptions of fried food.

Thanks to Deeply Odd I once again have high hopes for Odd Thomas, both as a character and as a series. I’m looking forward to seeing what happens next.

As Odd journeys through California and Nevada after a vision about the murders of three children, he befriends a series of eccentric helpers who become allies in a battle against a sociopath and a network of killers.