Dog People vs. Cat People
No Contest, the Pets Win.

WARNING: The views and opinions expressed here are strictly those of the author and does not in any way reflect those of Buzzy Multimedia, BuzzyMag.com, its affiliates, or sister companies. 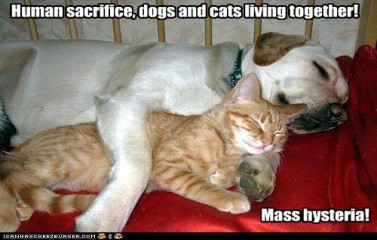 There are cat people and there are dog people and seldom do the two mix. True, there are those families who have both and everything is hunky-dory, but for the most part, canines and felines do not find themselves living with the same owner. I suspect it has more to do with the personalities of the humans than the animals.

I am a dog person, no doubt about it. When I had dogs, I loved that they loved me and were unabashed in showing affection. I loved the constant positive reinforcement they showed me every time I entered the room. Dogs have all these wonderful facial expressions they use with reckless abandon to further convey their emotional state: be it happy, sad, confused, or a little p’ed off. I love how a dog will make a slap fool of itself when having a good time, is empathetic enough to come and put its head on my lap when I am sad, and snuggle up next to me in bed at night so I can feel safe and secure. And by “snuggle” I mean hog the entirety of the bed so that I am capriciously balanced on the very edge of the mattress with a mere four threads of bed sheet to cover my body.

Cats on the other hand don’t seem to care about much. If they have a very private and secretive cat agenda, they make it clear that people are not welcome to be a part of it. Some folks like to quote the saying “Thousands of years ago cats were worshiped as gods by the Egyptians. This is a fact they have never forgotten.” Cats do not care if you are in the room with them or in the hospital hooked up to life support because they tripped you going down the stairs. They do have facial expressions: two-blank stare and annoyed. A cat will never go out of its way to greet you, unless it is to head-butt your legs or claw up your shins. Cats do not care if you are asleep, or sick, or recovering from open-heart surgery; they want to be fed when they are hungry and will do nothing to comply even in the slightest to your schedule.

All this I know from my personal experience, for I had a cat once. Once. I know what you’re going to say “oh no, my cat is different, my cat loves me, it shows me all the time” and to that I say “Good on you.” My cat hated me. It hated my husband and our friends. It hated the furniture and the walls and anything that was carbon based. And anything this cat hated it tried to kill. Repeatedly. Had it thumbs I know for a fact it would have killed my husband and me in our sleep and like the insidious Doctor Fu Manchu staged the scene in order to make it look like a murder suicide. 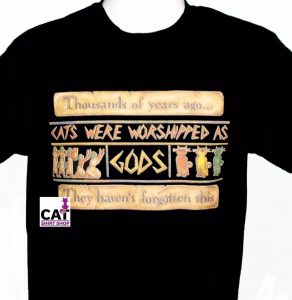 So now you’re wondering to yourself “poor cat, what did the mean writer-lady do to it to make it so hateful?” I’ll tell you what-I fed it, I cleaned its litter box; played doorman to its’ wanting to come in and go out. I took it to the vet to get its shots and repurchased furniture as it was destroyed. I made libations of cat nip in fruitless attempts to appease it. I paid lots and lots and lots of money in deposit fees and damages and cat toys it never touched because it was more fun to push the TV off the wall unit.

When my two dogs passed away within a few months of one another, I cried for days; truth is I still do. People who knew them called and passed on their condolences expressing grief and sorrow. Their presence is still felt and deeply missed in my home; their absence is like an ongoing echo in our lives. When friends and family speak of “the girls” as they were affectionately known, they do so with fond memories.

Not so with the cat. There was a universal sigh of relief when it passed losing the brave fight of trying to take on an oncoming tractor-trailer (it nearly won, managing to jack-knife the thing right in front of my house, ripping up the yard and almost hitting our car). I hated how the cat died, but not the fact it left this world. I am certain the cat would have gone to Hell but Satan still had a restraining order out against it.

Now it’s true dogs on the other hand may be just as mean, just as destructive, and just as miserable if stupid people raise them that way. However under normal circumstances, when you yell at a dog, telling it how angry and disappointed you are in its behavior, it at least has the decency to be ashamed of itself. Even if the dog was faking those great big sad brown eyes and it wasn’t really moopy or repentant it at least gave the courtesy of pretending to care. Cats never give you the satisfaction.

My girls, like many dogs, did not need designer toys. Yes, they had them to be certain; the little one had a collection of pink stuffed doggie-appropriate animals she was very proud of. When company came over, if she liked you, she would bring you one of her toys; if she didn’t like you she carried over a toy but would not let you touch it-psych! But to be fair, the girls also loved balled up sheets of paper, old socks tied up in knots, tennis balls, and sticks from the yard. The big dog used to bring rocks into the house for chewing on; she was a Rottweiler, so these were pretty big rocks but my point is this: dogs love anything you give them because you gave it to them.

Cats, not so much. They know when their canned food does not cost nine dollars an ounce; in protest they will not only fast and render you wracked with guilt but meow insistently until you rob a liquor store and purchase them something suitable. Cat owners buy their cats kitty condos, carpeted towers and platforms built suitable for a feline king to claw and call their own-and I dare say every cat owner whose house I have ever visited has one of these contraptions still in mint condition but their couch is a bit on the “clawed the heck up” side. Their homes are filled with thousands of dollars of cat toys and cat statues and cat paintings.

Car lover or a dog person I still have to ask the question: what the hell is wrong with us? We’re both crazy as a lark, and even Dr. Phil has commented on the mental instability of that species of bird.

In these hard economic times, Americans are spending about fifty billion dollars a year on their pets; it’s a statistic I pulled off the internet but I am inclined to believe it as the truth. I have seen many a car dealership, clothing store, furniture store, gas station, restaurant, and supermarket close up its doors but every Pet Smart I drive by is booming with business.

And it’s not just the major chains catering to pet owners but small businesses do well who also accommodate pets. I have seen no less than three different “we’ll come to your house and groom your pet there” type of vans on my side of the city alone. Who knows how many there are here?

What’s worse is our animals are living better than us. Cats can be sent to therapy and dogs are being written prescriptions for Prozac-neither would be needed if we would just stop dressing them up in Halloween costumes and posting their pictures in embarrassing mims. There are food banks with empty shelves but Fido and Mr. Snuggles are living in the lap of luxury eating up designer gourmet biscuits. There are pet resorts and day spas for our animal companions. Some dogs I have met have highlights put in their hair. ARE YOU KIDDING ME! I have to go to Super Cuts with a coupon to get my hair cut! Not styled-just cut. And as if I were not already nuts enough on the topic there are insurance companies who are offering health care for pets, even if your pet has a pre-existing condition! If that does not make you want to stand up and occupy something I don’t know what will. But if you do, bring the dog because he’ll think it’s fun to sit around all day doing nothing with you.

The cat is pretty self-sufficient; just leave enough food and water out and clean the litter box before you leave and kitty is good for a weekend on its own. It won’t even k now you left and will not acknowledge you when you return.