Shadows Beneath: The Writing Excuses Anthology
Written by: Brandon Sanderson 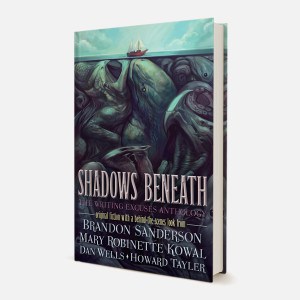 Shadows Beneath is not an ordinary book. Sure there are four top notch short stories by the team from Writing Excuses, a writing advice podcast, but it also has a behind the scenes look at how the stories were crafted that I don’t think I’ve seen anywhere else. It should be of particular interest to aspiring writers to see how four professional writers go about making a publishable piece of fiction.

As good as those extras are, they wouldn’t be worth much if the stories themselves weren’t excellent, and they are. The anthology starts off with Mary Robinette Kowal’s tale A Fire in the Heavens about a quest to a new land in a tidally locked world. The story follows Katin, a nun of sorts as she and a group of sailors attempt to find out if the ancient land spoken of in Katin’s religious order actually exists. I was surprised at the extent that this story got to me, and by the end I was fully invested in the fates of Katin, Captain Stylian and their crew. The story has a depth to it that wouldn’t have been out of place in a full length novel, yet it never gets too far away from its central premise.

Next up is Dan Wells’ I.E.Demon a military horror story of sorts, although it’s short on horror and long on fun things the military might try with demonologists on staff. It’s much shorter that A Fire in the Heavens but it works as a small self contained story with plenty of action and humor to help the story along. I really enjoyed the unnamed protagonist’s quick thinking when faced with something supernatural and Dan Wells writes a good monster. It would have been good to have more in the way of story but it’s a fun read regardless.

Howard Tayler of Schlock Mercenary fame wrote the next story An Honest Death which pairs well with Dan Wells’ story as it’s a pseudo-military horror/sci-fi story. The protagonist works as private security heavy for a pharmaceutical company that’s just made a discovery that could render humans functionally immortal and that has drawn the attention of…something. Something that looks an awful lot like the grim reaper. I loved the way the protagonist approaches the grim reaper problem as a smart soldier would, and by the end of An Honest Death I was thinking that Tayler should see if he can get someone in Hollywood to make it into a movie as he’s got a cinematic style to his writing that’s extremely evocative.

Brandon Sanderson rounds out the collection with Sixth of the Dusk. It’s quite different to Sanderson’s longer works as the story is very focused, although his trademark extensive worldbuilding can be felt in the bones of the story. The tale follows Dusk, a reclusive hunter on a world that’s rapidly leaving his style of living behind. Sanderson has clearly put a lot of thought into the world that Sixth of the Dusk exists in, and like Mary Robinette Kowal’s story it feels like it could be part of a much longer novel. It’s an extremely well written adventure story with a touch of melancholy to it, if Sanderson ever does write Sixth of the Dusk into a longer novel I’d be first in line to buy it.

For each story there is a collection of notated critiques with the other writers and first drafts of the stories themselves. It’s interesting to see how much (or little) each tale has changed as it’s gone through the critique process. How much interest they will be to non-writers is up for debate, but I found them fascinating insights into the four writer’s processes.

Shadows Beneath is a collection of well written and well matched stories that showcases the talents of the Writing Excuses team. I enjoyed the extras but readers who are just looking for the stories themselves won’t be disappointed. 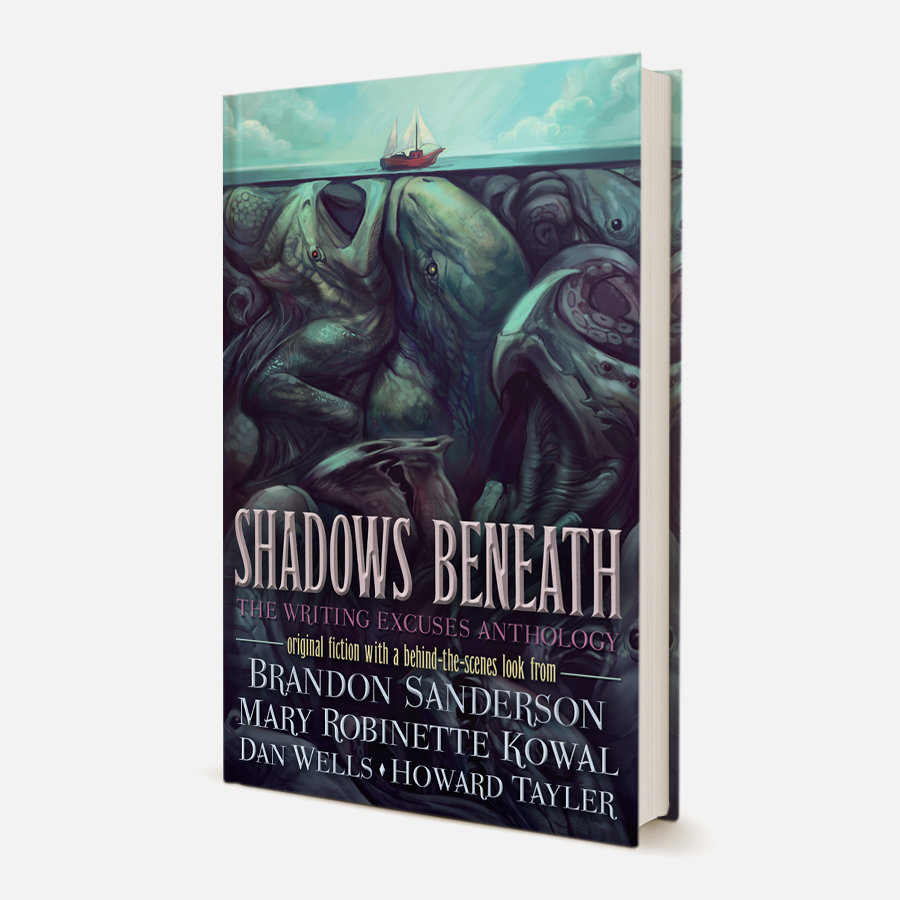 Shadows Beneath is not an ordinary book. Sure there are four top notch short stories by the team from Writing Excuses, a writing advice podcast, but it also has a behind the scenes look at how the stories were crafted that I don’t think I’ve seen anywhere else. It should be of particular interest to aspiring writers to see how four professional writers go about making a publishable piece of fiction.