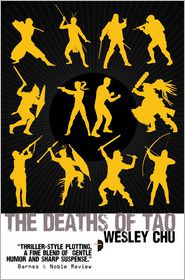 A few months ago I reviewed The Lives of Tao by Wesley Chu, a fantastic action adventure that successfully blended sci-fi, spy fiction and snark. It told the tale of depressive couch potato Roan Tan as he was sucked into an alien civil war by an entity named Tao that took up residence in his head. As much as I loved The Lives of Tao, I think The Deaths of Tao is even better.

One of the strengths of The Lives of Tao was how relatable Roan was; he was the right mix of lazy everyman and determined potential spy. In Roan has become the spy he was striving to be in the first book, and it has cost him terribly. Estranged from the love of his life, Jill, and the rest of his family, Roan is still fighting the good fight in the war between the human friendly Prophus and the utterly indifferent Genjix. Roan is not only a spy in his own right, he shows far more independence from Tao in this book as he’s more of a full partner rather than an unwilling participant.

The snark is still front and center in the relationship between Roan and Tao, and it gives The Deaths of Tao some much needed lightness. For all that The Lives of Tao had some very dark moments it was the Star Wars: A New Hope to The Deaths of Tao ‘s The Empire Strikes Back. It’s far clearer in this book the scope and the costs of the war that’s being fought behind the scenes of the human world. Even the Prophus are prepared to sacrifice thousands of human lives in order to win, and it’s a fact that weighs heavily on the narrative.

Wesley Chu again shows a flair for writing frenetic fight scenes, especially the hand to hand combat, but he’s also branched out into other forms of conflict. In most novels I find political discourse amazingly boring, but the scenes where the character Jill fights the alien war in congress are superb. They add another layer to the war and help get across to the sheer scale of the conflict. In The Lives of Tao everything was very focused on Roan’s struggle, whereas The Deaths of Tao puts that struggle in context.

Chu also gives us a new antagonist in Enzo, a human raised from birth to host one of the alien Genjix. Enzo comes across as complete character, both an absolute monster and actual human being. It helps give some of the Genjix side of the story and even though they are definitely the bad guys having that point of view changes the Genjix from faceless demons into a more satisfying and understandable opposing force.

The Deaths of Tao does suffer from gambit pile up, especially towards the end, but they made me desperately wish for the third book to come out so I can see how these plots play out.

Perhaps the strongest part of The Deaths of Tao is the fact that Chu never lets the story get bogged down. Every time he takes the story forward he does it with an action scene in mind, and this trick rips the reader through from start to finish.

All in all The Deaths of Tao is a tightly written fun to read action thriller that will leave you wanting to hassle Wesley Chu about getting the third book.

The Deaths of Tao

Both the Prophus and the Genjix have found a way off Earth, but the Genjix method means the destruction of mankind, leaving Roen and Tao to save the world.