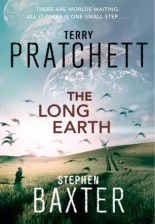 The idea of parallel universes is not a new one, but traveling to them in fiction always involves massive amounts of power, an inbuilt knack or a wormhole of some kind. In The Long Earth

by Terry Pratchett and Stephen Baxter traveling to the parallel earth next door is easy, all you need is some basic electronics and a potato. The potato sounds absurd but once you consider that it’s the perfect organic battery it fits in with the way Pratchett and Baxter’s universe works.

The other earths are all slightly different, all different realities with one thing in common: no humans. In every other Earth, humanity never happened.

Suddenly mankind has all the space it needs, all the resources we could ever use and more. What happens then? The Long Earth is a semi-serious look at answering these questions, with the scientific and political ramifications of simply being able to jump to the next world when you’re done with this one.

We see most of the story through the eyes of Joshua Valienté, someone who can step between Earths without a machine and his traveling companion Lobsang, a Tibetian motorcycle repairman who happens to have been reincarnated inside a computer. We do get a little bit of the story of Monica Jansson, a police officer assigned to help police those Americans who travel to the other earths. Joshua is presented in story as strange and anti-social but his character is very easy to like. Lobsang comes off as a cross between a benevolent monk and HAL 2000.


There are no real antagonists in The Long Earth, although there is plenty of danger and adventure as they get further and further from our version of earth. This lack of a primary antagonist would normally slow a book down but The Long Earth keeps up the pace by keeping the variations of visited Earths interesting. Our Earth is in danger, both from its own populace and from several million Earth’s away. These dangers help keep the tension up as Joshua tries to reconcile what he knows with what he is seeing.

, and it could almost be an homage to Gene Roddenberry. Even though there are no spaceships as such, there is a small crew boldly going and the vision of humanity and its future is broadly very positive. Pratchett’s humor isn’t as overt as it is in the Discworld series but it is definitely present. There are also plenty of references to the Discworld scattered through the novel. Baxter’s meticulous approach to science fiction is also obvious as everything feels like it could be possible, if we can accept that traveling to a parallel Earth only requires a trip to Radio Shack and a tuber.

There are a few problems with The Long Earth, but they mostly stem from the fact that it’s book one of a two book series and thus its ending feels like a midway point rather than a real ending per se. I would have liked to have heard more from Officer Jansson as her character is vital to the novel’s integrity but she vanishes about a third of the way in and doesn’t reappear until the end.

A very good, interesting sci-fi adventure desperately in need of its sequel. The next book is being written at the moment but doesn’t have a firm release date. Whenever it is, I’ll be lining up for my copy.

The possibilities are endless. (Just be careful what you wish for. . . .)

1916: The Western Front. Private Percy Blakeney wakes up. He is lying on fresh spring grass. He can hear birdsong and the wind in the leaves. Where have the mud, blood, and blasted landscape of no-man's-land gone? For that matter, where has Percy gone?

2015: Madison, Wisconsin. Police officer Monica Jansson is exploring the burned-out home of a reclusive—some say mad, others allege dangerous—scientist who seems to have vanished. Sifting through the wreckage, Jansson finds a curious gadget: a box containing some rudimentary wiring, a three-way switch, and . . . a potato. It is the prototype of an invention that will change the way humankind views the world forever.