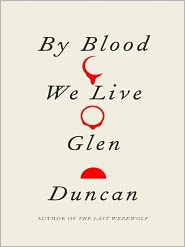 By Blood We Live
by Glen Duncan

Childe Roland to the Dark Tower, Macallan in Hand.

I will come back to you, she said, and you will come back to me. Wait for me. And so Remshi, at some 20,000 years of age, is by far the world’s oldest vampire, a promise to his millennia-deceased werewolf lover having fortified him to push through the weariness and ennui and experiential overload that eats away at and eventually will claim even the strongest of the undead. It’s nonsense, of course, as Remshi well knows, and yet seemingly she has now come back to him in the form of the werewolf Talulla, and so Remshi
finds himself suddenly lost in a dream he shouldn’t be having, poetically fated (ah, the blood tang of irony) to fulfil one of the more outlandish of his own, larksome prophesies…

If By Blood We Live reads in summary much like any common specimen of the vampire/romance genus, then let the uninitiated beware the devil in Glen Duncan’s derailment of narrative cliché, the considerable sting in his destereotyping of tale; for here, as ever and as so palpably evident in the first two novels of his Last Werewolf trilogy, Duncan steadfastly refuses to romanticise his characters (or by association himself; there manifests a refined sort of homogeneity throughout his work, an engorged, life-slaked Duncan id within which all his disparate narrators are subsumed); and if this uncompromising honesty is at times hard to stomach, or if readers might yearn now for Jake Marlowe, whose wry self-deprecation inured them to the visceral depravations of The Last Werewolf — the underlying horror of being a werewolf, stripped of all Hollywood glitter — and in memory sustained them through Talulla Rising, then all the more kudos to Duncan for respecting his characters (and audience) enough to delve deep into their lows, never sugar-coating what he unmistakably sees as the Hyde-dominated side of the human condition.

As per the book’s human-cum-werewolf dynamic or that of its vampires drinking not just the blood but also — a consummate intimacy — the essence, the undying presence of each victim, By Blood We Live itself presents as something of an arranged marriage, the expectant, intrinsically brutal coming together of pulp fiction’s coy (if vaguely erotic) content and Duncan’s powerful, sexually charged literary style; and where other writers might have sought to alleviate the discomfort, wooing their audience with golden hero(in)es and rainbow story arcs, Duncan is unremitting — almost perversely so — in taking his starting premise in hand and staunchly flagellating it, his thoughts turned not to the happily-ever-after of romantic desire but instead merely to satisfying whatever Grimm release the fairy tale might allow. His writing is sly, cultured and throbbing with intent.

(How could it be otherwise when so much of Duncan himself finds its way into his characters? First Jake, then Talulla, now Remshi.)

Duncan gives us sharp first-person narratives, introspective and melancholy yet tellingly erudite, in no way prone to self-deception. If by his works a man be known, Duncan seems the sort who might abandon himself wilfully to the dark kôans of existence, shaving only when there’s a good stubble and always with a blade, its edge starkly in focus while a tumbler of Scotch lies soft and warm in the background. His writing is languorous in places, but never meandering, never too far from page-turning bursts of action; and if the odd, churlish reader might rail against being given this confined, intimate space in which to live and breathe alongside characters of ill-repute, then well might Duncan smoke contemptuously and visit paper cuts upon them. And no doubt there is more than a little authorial blood seeping through, too, where part five of By Blood We Live — the novel’s and indeed the trilogy’s dénouement, artfully entitled The Wrong Twilight — begins with Remshi’s sombre lament that within the purview of his 20,000 year lifespan mankind’s literary appreciation did flower but all-too-briefly, its connoisseurs withering away in mere centuries, decades even, choked out by pestilent semi-literates ‘for whom the test of whether a book was worth reading was whether they’d want to be friends with the protagonist.’

Glen Duncan may not be interested in making friends, but he’s on the lash and he’s a bloody good writer. Sound the slughorn. Childe Roland to the dark tower has come.

The final battle between werewolves and vampires has an unexpected twist: love. With twenty thousand years under his belt, Remshi is the oldest vampire in existence. He is searching for the werewolf named Talulla, who haunts his dreams as a memory from his ancient past. But he is not the only one seeking Talulla: She is being hunted by the Militi Christi, a fanatical Christian cult hell-bent on wiping out werewolves and vampires alike. Inexplicably pulled toward one another, and with no other choice, Remshi and Talulla must join forces to protect their families, fulfill an ancient prophecy and - through a love that should be impossible - ensure the survival of their species.